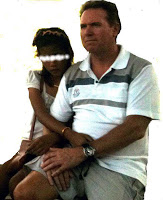 ANOTHER ATTEMPT TO GAG ENDS IN FAILURE

-Attempts to have stories and investigations on this site blocked by claiming copyright infringement appear to in the main have failed.
They have been made by two convicted fraudsters, a man currently on trial for child sexual abuse, an American Embassy warden, and the Pattaya Times Media Corporation, an organisation which has almost ceased to function.
Interestingly the Pattaya Times claimed ownership of Pattaya-Times.Com while less than two months ago www.pattaya-times.com stated it had no connection with the Pattaya Times.
This was of course nonsense. The Pattaya-Times.com website seems to function only to write stories about Andrew Drummond.
The complainants were:

Drew Walter Noyes, currently on trial in Pattaya for extortion and fraud.

He claims most pictures of him were taken on his camera at his request and ‘stolen’. In fact most of the pictures were supplied by former friends.

Drew Noyes:’Please note: all copyright violations are my pics from my camera stolen and posted on http://www.andrew-drummond.com who then used Blogger to host his
hate site.

He claims a picture of a pool villa is copyright of Bangkao Bay Holding Company- which it probably is. However it is a journalists right to show what he has put on offer and it is in the public domain  and being used to promote a project which is suspect.

Bobby Brooks, an American warden (consular assistant) based in Pattaya, who asked PattayaOne to take down story of the arrest of Drew Noyes.

He claims picture of him in Naval Uniform is copyrighted. It is I understand by the U.S. Department of Defence who have not complained. He uses the picture and also a ‘Homeland Security’ motif to demonstrate that he is a person of integrity – So why would a man ‘dedicated to preventing terrorist attacks in the United States’ want pictures of himself in Coast Guard uniform, and his ‘Homeland Security’ certificate withdrawn when he shows them on his site? And why would he want the story about Drew Noyes’ arrest pulled?

This is Bobby’s complaint and here is what he complained about.

The photos are attached to an article from a site that puts out hearsay and
posts trademark images and copyrighted images with out the owners
permission, there is a court order to remove the images from their site,
but somehow they keep posting it under another link always with my image.
These images other than the ones from our websites were not taken by the
poster and they never asked or had the authority to use them from our site and use them for a personal blog.

Court order? Show it Bobby. No hearsay Bobby. We are just protecting the source. What other links?

The barely existent  Pattaya Times Media Corporation
This company, whose directors change on a regular basis, complains I have lifted their stories. I have to; to show how crass these stories are, how many promote Drew Noyes, and how many are ‘stolen’ stories. This is a legitimate journalistic exercise and a bit rich from an ailing organisation which lifts stuff wholesale from the net from newspapers and wire services without paying.
US Immigration and Law: The company owned by Brian Wright whose trial for child sexual abuse continues this month on July 31st at Pattaya Provincial Court.

Well there are a few pictures of him with children so I can see why he is quite unhappy. It appears one of my original stories on Brian Wright may be down. It was either that or it just did not link when I changed isp, but if you want to see the pictures he refers to go here.

He also wanted a graphic of his client list taken down. This however is quite legal to publish in this form. He claims to have among his clients the following: Chief of Staff US Marine Corps Asia/Pacific,  UN Diplomatic Security Chief, Judge, US Army Special Agent, Base Commander US Army, Customs & Border Protection Senior Officer, 5 Police Officers, Numerous Military Officers up to the rank of Colonel, Secret Service officer, 5 FBI Special Agents, 4 Deputy Sheriffs, Chicago Vice-Detective,
3 FAA Officers, US Immigration Officer (Airport), Numerous Attorneys & Medical Doctors, Clinical Psychologist, 6 University Professors, NASA Scientist, Assist. Director of Finance, American Embassy Bangkok, Thailand,CEO’s and CFO’s of major US CorporationsKBR, SEI and Dyna Corp personnel from Iraq & Afghanistan. Seems like the U.S. is going to be run by Thai wives!

Of 12 complaints referring to 27 stories only three have  one has been blocked and those decisions are being appealed. (a) In one story I included an illustration of Bang Kao Bay resort on Koh Samui. It is not particularly important. The story can be re-instated without the picture if need be.(BREAKING NEWS – This story has now been re-instated)
But I felt it important to show what this convicted fraudster was offering to the public.
(b) The second relates to a picture of Drew Noyes on a story about his court case where he is accused of defrauding Dutchman Theo van der schaff.  Again the picture is not important and can easily be replaced with another.  But Drew Noyes has lied by saying it was taken at his request on his own camera.

(BREAKING NEWS: This story has also been re-instated)

Four of the complaints have been made since June this year, suggesting a conspiracy between the complainants, whom of course all know each other.

Everything taken into consideration this has little impact. One or two stories were down as they did not link properly when I moved site.
You can read the complaints here at chilling-effects. If you do you will notice that Drew Noyes and the Pattaya Times have also claimed that a story on the Pattaya Times was also a breach of copyright. This is the story referred to.  No contest. I would have complained on the basis that it was sleep inducing.

But even more bizarre was a copyright complaint against this story – The great newspaper rip-off which shows just exactly how Drew Noyes rips articles off the web worldwide and puts the bylines of his wife Wanrapa Boonsu and other minions on them.