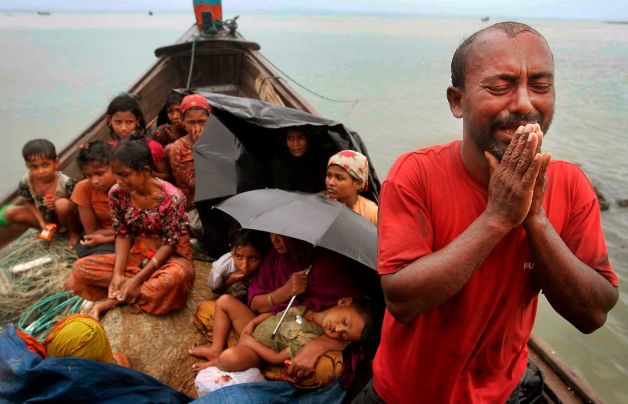 Today I am taking the unusual step of publishing a report by Human Rights Watch on what’s happening to the Rohingya in Burma (Myanmar) without any comment. I am very concerned. Genocide may be too harsh a term to use, or it it? But ASEAN is hardly raising a voice – nor apparently is Aung San Suu Kyi and will Obama?  who keeps talking about someone called Aung Yan Suu Kyi.

These are the people who’ve been filmed  being towed out to see by the Royal Thai Navy, something that the local site Phuketwan down south has done a lot of good work on.  Here it is. Its all being watched on satellite of course.

And its here because newspapers are going to cut it drastically

HRW: Bangkok, November 18, 2012 – Attacks and arson in late October by ethnic Arakanese against Rohingya Muslims in Burma’s Arakan State were at times carried out with the support of state security forces and local government officials, Human Rights Watch said today. ‘

New satellite imagery obtained by Human Rights Watch shows extensive destruction of homes and other property in the predominantly Rohingya Muslim areas of Pauktaw, Mrauk-U, and Myebon townships, all sites of violence and displacement in late October 2012.

Rohingya and Arakanese residents of Pauktaw and Mrauk-U townships described to Human Rights Watch the sectarian attacks and arson that occurred in those areas on October 23 and 24, which in some cases involved state security forces. Similar violence between Arakanese Buddhists and Rohingya and non-Rohingya Muslims, also involving state security forces, occurred in seven other townships in late October.

US President Barack Obama is scheduled to make a one-day visit to Rangoon on November 19 to meet with Burmese President Thein Sein and opposition leaders.

“President Obama should make clear to the Burmese president that the attacks on the Rohingya need to stop if the Burma government wants to avoid renewed sanctions and the suspension of renewed military-to-military dialogues with the United States,” said Brad Adams, Asia director at Human Rights Watch.

“This is crunch time because Burma’s failure to contain sectarian violence in Arakan State and hold accountable those responsible calls into question the Burmese government’s stated goal of becoming a rights-respecting, multi-ethnic state.”

These images show zones of documented destruction covering 348 acres of largely residential areas predominantly home to Rohingya Muslims who have since fled and to Kaman Muslims in Kyauk Pyu.

The images, which were captured on November 3 and 8, are not exhaustive and reflect damages in only five of the thirteen townships that have experienced violence in Arakan State since June.

Rohingya from Pauktaw now at camps near Sittwe told Human Rights Watch that for weeks they faced hostile Arakanese mobs, sometimes led by Buddhist monks, who threatened violence against them and anyone else found selling or providing the Rohingya with food or other assistance.

They said they repeatedly notified local authorities of these threats, but insufficient action was taken. In late October, just prior to the violence, Rohingya were called to a series of community meetings held by local Arakanese members of a nationalist political party and local government officials apparently aimed at convincing the local Muslim population to abandon their homes.

On October 23, when boats filled with several hundred armed Arakanese descended on the riverside Rohingya villages in Pauktaw, the Rohingya fled, fearing for their lives, and their villages were razed.

Displaced Rohingya and Kaman Muslims told Human Rights Watch that some members of the state security forces provided them temporary protection at various points in late October – for example by firing shots in the air to fend off hostile Arakanese mobs, or by providing water and food to their boatloads afloat offshore who were being denied permission to come ashore in Sittwe.

But these instances of protection were offset by violence committed against the Rohingya and Kaman by other groups of security forces. For example, on October 26, soldiers from Nasaka, a government border guard force under the command of the army, severely beat dozens of displaced Rohingya who had clambered off boats on to the shores near Sittwe.

The Rohingya were ultimately surrounded and overwhelmed, and survivors fled by land to an area outside the village. Gruesome casualties were sustained on both sides, including beheadings and killings of women and children.

The displaced Rohingya populations from the sites of destruction depicted in the new satellite images are in dire need of shelter, food, water, sanitation, and medical care, Human Rights Watch said.

The displaced from Pauktaw have been forced to seek refuge in beachside coastal areas outside Sittwe, in treeless, makeshift camps under the hot daytime sun without adequate food, potable water, and other necessities. 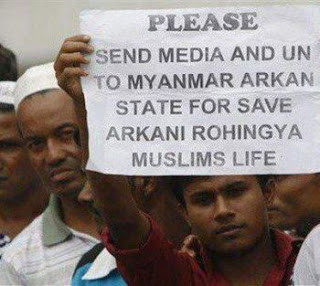 One makeshift camp with an estimated 1,200 displaced persons lacks latrines and the group is subsisting primarily on donations from nearby Rohingya villages, which themselves struggle to survive.

Some of the displaced had tarps for shelter bearing the logo of a United Nations agency that they said they purchased from local merchants.

Burmese security forces have restricted the access of international humanitarian agencies to the area and to even more remote coastal areas where others from Pauktaw are seeking refuge.

Since their arrival some displaced persons reported they have been beaten by local security forces.

The displaced Rohingya from Yan Thei are likewise in dire need of aid, Human Rights Watch said. They are living in makeshift shelters outside their now razed village.

Groups of displaced Arakanese Buddhists from Yan Thei have sought refuge in two monasteries in Mrauk-U town, where they appear to have received sufficient amounts of aid from the local Arakanese community.

Unlike with the Rohingya, the government is not restricting the movements of ethnic Arakanese.

While violence had not affected Mrauk-U Township in June, there was previous violence in Pauktaw. According to local accounts, approximately 14 homes in Pauktaw were burned down in June.

Villagers told Human Rights Watch the previous arson and subsequent threats and incidents of violence were clear indications of the risk of future violence.

“The satellite images and eyewitness accounts reveal that local mobs at times with official support sought to finish the job of removing Rohingya from these areas,” Adams said.

“The central government’s failure to take serious action to ensure accountability for the June violence fostered impunity, and makes it responsible for later attacks not only when security forces were directly involved but also when they weren’t.”

The Rohingya have faced decades of state sponsored discrimination and abuses. Burma’s 1982 Citizenship Law effectively stripped the Rohingya of citizenship, rendering them stateless.

The area of destruction in Kyauk Pyu measures 35 acres and includes 633 buildings and 178 houseboats and floating barges adjacent on the water, all of which were razed.

Members of the Muslim community in Kyauk Pyu also attacked and in some instances killed ethnic Arakanese before fleeing by sea toward Sittwe.

“The Burmese government needs to get serious about addressing the root causes of the sectarian violence in Arakan State, including Rohingya statelessness,” Adams said. “The absence of accountability for this horrific violence gives a green light to extremists to continue their attacks and abuses.”

All four districts of Arakan State – Sittwe, Maungdaw, Kyauk Pyu, and Thandwe – have experienced violence since June 2012. Violence between Arakanese Buddhists and Rohingya Muslims reignited on October 21 and continued to some extent all week in 9 of the state’s 17 townships: Pauktaw, Mrauk-U, Myebon, Kyauk Pyu, Ramree, Kyauktaw, Minbya, Rathedaung, and Thandwe. Four other townships experienced serious violence in June and thereafter: Sittwe, Maungdaw, Buthidaung, and Toungop. Many of the places targeted in October had not been attacked in the earlier round of sectarian violence that consumed Sittwe and other parts of northern Arakan State in June. The sectarian violence that erupted in Arakan State in June devastated both Arakanese Buddhist and Rohingya Muslim communities, both of whom lacked protection from security forces.

To read the Human Rights Watch report “‘The Government Could Have Stopped This’: Sectarian Violence and Ensuing Abuses in Burma’s Arakan State,” please visit: http://www.hrw.org/reports/2012/07/31/government-could-have-stopped