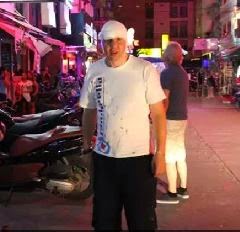 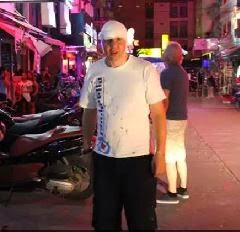 The attack on a 40-year-old Scot named as Stuart Page in Soi LK Metro in Pattaya two nights ago was caught on CCTV and appears to show at least one person who had nothing to do with the fight coming along to join in.

More common perhaps when foreigners are attacked in places like Pattaya,  Soi Bangla, in Phuket and Soi Green Mango in Koh Samui, and Nana and Cowboy in Bangkok,  one can normally expect a quorum of at least ten.

I like this from the Khao Sod – I think the English language section is written by a foreigner.

It’s the first Thai newspaper I have seen to admit that Pattaya is ‘well  known for its red light district,’ even though that is something of an understatement. The problem is finding your way out of the ‘red light’ area.

CHONBURI — Police say they are searching for two Thai men who brutally assaulted a foreign tourist in the popular resort town of Pattaya early this morning.

Police say the assault took place at around 1 am near Soi Bua Kao in Central Pattaya district. The attack left the tourist, who said he is Scottish, with severe injuries on his head and bruises all over his body, police told reporters.

According to Pol.Cpt. Noppadol Raksawong, CCTV footage in the area showed the tourist and another foreigner arguing with a Thai woman in front of a bar in Soi Bua Kao. Two Thai men later arrived on a motorcycle and one of them drew out a knife and started attacking the tourist. A brawl soon ensued.

Pol.Cpt. Noppadol said much of the fight was obscured on the CCTV footage by an umbrella, though the tourist could clearly be seen attempting to walk away, only to be further assaulted. The two Thai men reportedly left the Scotsman bleeding on the street and sped away on their motorcycle.

Pol.Cpt. Noppadol said the police are working to identify and arrest the two men seen in the CCTV.

“This is an act that shows no fear of the law, and it happened in front of many tourists in the area,” Pol.Cpt. Noppadol said.

Crimes against foreigners are common in Pattaya, which is well known for its red light district.

Link below to video