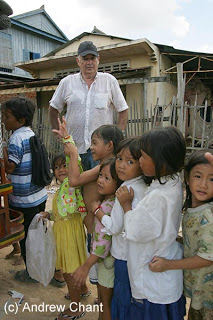 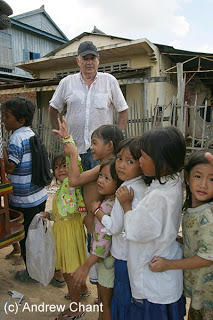 Briton David Fletcher – exposed by the Flying Sporran as a convicted child sex abuser in Britain before opening up a children’s ‘charity’ on a Phnom Penn rubbish dump – is to be extradited to Cambodia within the next 90 days.


The Thai courts have approved his extradition to face a ten year jail sentence for rape.

Fletcher ran a bar in Phnom Penh called ‘Bogie and Bacall’  and during the day organised trips to feed the children at the Stung Mean Chey rubbish dump.

Many complaints had been made about his activities to Embassies in Phnom Penh and child watch charities but with little effect.

“There was no proof to be found online as his crimes were committed prior to the internet’s invention but SG8 researchers spent days searching through microfilm in the local library and eventually found the damning  evidence.

“A decision was made to involve a widely respected investigative journalist who had connections with the British press in order to gain maximum exposure. To that end Andrew Drummond was contacted to see if he wanted to take up the story.

“He and his photographer arrived in Phnom Penh less than a week later and spent a day with Fletcher posing as interested, if somewhat gullible, tourists.

“Their report appeared as a two page spread under the headline ‘British Paedo Running Kid’s Charity in Cambodia” in the Sunday Mirror the following weekend. Fletcher’s career as a perverted fraudster in South-East Asia was all but over”.

After the exposé in the Sunday Mirror Fletcher fled to Thailand but was quickly arrested in a guest house in Bangkok.

He was convicted of the rape of a child he had bought from her parents.

Officers from Britain’s SOCA (Serious Organised Crime Agency) assisted in the preparation of the extradition papers for both the Thai and Khmer authorities.

It is not known if his four years spent in jail in Bangkok will be deducted from his ten year jail sentence. He had appealed against an earlier extradition order.

Fletcher ran a series of hairdressing salons in Cambridge and Saffron Walden was convicted at Norwich Crown Court in July 1997 of the statutory rape of a 15-yr-old girl, whom he first plied with champagne and to whom he offered £250 cash for sex. He also admitted possessing offensive weapons, two pepper sprays and two canisters of CS gas. He was jailed for eighteen months.