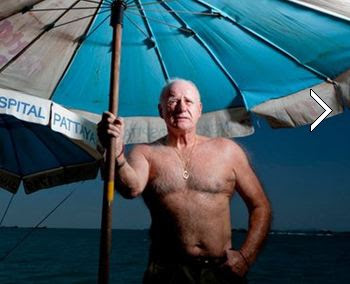 Scandinavian gangsters in the Thai resort city of Pattaya, Thailand, have been raising a glass of schnapps this week to their old friend career criminal Leon Owild who died aged 75 in a suburb of North West Copenhagen after a long illness.
Owild for a while was a charismatic character in the Danish underworld smuggling cheap cigarettes in from Poland to Denmark.
After he ‘retired’ he was elected President of KRIM an organization set up to help people fight injustice in the Danish legal system.
But it seems the old leopard could not change his spots, because he had to be kicked out when he was arrested for drugs smuggling and sent back to jail.
Women loved him, the Danish Ekstra Bladet newspaper reported, and he boasted ten lovers at the same time and a daughter in Pattaya – now aged 15.
Owild’s criminal roots were grounded in Vesterbro, the former red light area of Copenhagen, where his friends Niels Colov and Lonne Fristrup Jensen were both pimps.
All three ended up in the sex resort of Pattaya along with Danish bank robber Rene Larsen.  Both Larsen and Jensen were arrested – and Jensen was deported.  But Larsen made his own way back to Copenhagen after mysteriously escaping and announced he would rather do his time there. 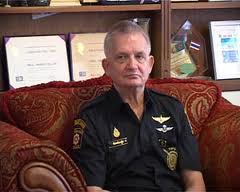 Niels Colov meanwhile in Thailand is reported to have undergone a conversion. He became a Buddhist and a vegetarian, President of the Pattaya-Jomtien Rotary Club, owner of the Pattaya People Media company, and of course Group Leader of the Foreign Police Volunteer Assistants.
His criminal record for violence, duress, receiving stolen property, and pimping in Vesterbro, was wiped under Denmark’s rehabilitation laws. This was because he had not committed an offence for an extended period in Denmark.
This may of course because he had been committed his offences in Pattaya where he received the blessing of the local police and they enjoyed his entertainments.
Complaints had been made about him in connection to allegations of extortion involving advertisers to the Pattaya People Media group but none were ever made subject to any investigation.  He also set about gathering numerous awards for services to the community and frequently announced his charity donations.
For a while Colov had a rival in American Drew Walter Noyes, who had been exposed as a fraudster in the United States, but who arrived in Thailand claiming to be both a lawyer and financial adviser to the Bank of Thailand.
In fact Noyes, a well known con man, owned a couple of beer bars called Lollipop and Zebra before starting a ‘law firm’ and a rival newspaper ‘The Pattaya Timesa’ to attract punters to his property and legal advice scams.
The two went to war with each other publicly accusing each other or being criminals and even of wife beating.Colov sued Noyes for libel and also stealing his business directory and Noyes apologised and the two made a pact often being seen shaking hands in public.

Noyes, a leading member of Pattaya’s criminal fraternity, left Thailand this year for the United States and is currently on bail for extortion having been convicted and jailed for two years.He was convicted of attempting to extort the Thonglor Clinic in Jomtien out of 7 million baht.  That was the price joint owner Michael Goulet was told he had to pay to do business in Pattaya.

Both Noyes and Colov helped each other with contacts to city officials, senior police, and army officials. Both apparently agreed to help police identify foreign criminals in the resort and had set up arrangements with the now publicly disgraced Crime Suppression Division.
The Pattaya People carried in its pages numerous property scams in which punters were fooled into buying holiday and retirement homes
which would never be built while Colov awarded himself an UNESCO Cross for his services to the community,  (No such award exists), and even bought a Papal blessing.
He also got local city officials to join the Knights of Rizal, an organization celebrating Philippines independence hero Jose Rizal.
Earlier this year Colov entertained Scandinavian Bandidos leader Brian Sandberg, a career drugs trafficker, and he also introduced them to city officials who ‘liked motorbikes’.
Owild, Larsen, Jensen, and Colov put the Danish version of Pattaya’s criminal fraternity on the map in Thailand long before the enclaves in Kata, Phuket and could in some ways be said to have helped the ball rolling into the city taking over from Southern Spain as the world’s ‘Costa del Crime’.