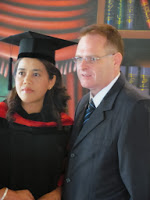 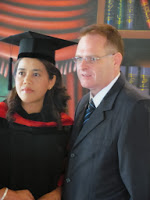 American Drew Walter Noyes, founder of the Pattaya Times newspaper, which once claimed to be a partner paper of the Bangkok Post, yesterday (Saturday) made an amazing attack on the joint-owner of a well-known English language school in Pattaya, CTLS.

Noyes, 57, turned up outside the school offices in his car adorned with the badges of a Bangkok Lions Club and the Royal Thai Police

“He tried to be friendly and charming, his usual style,” said joint owner Mr Chris Gleeson, “but I was having nothing of it. I told Noyes if he had anything to say he should do it through lawyers.

Noyes then demanded to see the work permit of Mr Gleeson and was re-assured firmly Mr. Gleeson’s paperwork was in order.

Briton Mr Gleeson and his wife Tewi had made formal complaints to the Royal Thai Government and the Technical CSD Police about attacks made on their business by Drew Noyes on the Pattaya Times online website and on other Google BlogSpot sites he has set up to attack his perceived enemies.

The attacks began over CTLS advertising on this site.

In his outburst yesterday, which took place after he cruised past the CTLS language school in Pattaya several times, Mr Gleeson claimed Noyes was red with rage:
“He accused me of donating US$15,000 to the Andrew Drummond legal fund. He demanded to know my legal status and whether I had a work permit.
“He said: ‘The bosses of the Pattaya Times are going to love this’. I asked him what on earth he was talking about.’You’re the boss of the Pattaya Times’.
“He said: ‘The boss of the Pattaya Times is going to love this! You are f**ked Fat Boy!’
“I asked him whether he had looked in the mirror himself lately.”
“He said my business was finished in Pattaya. I told him I was not scared of him in the slightest. My papers are completely in order and that if he wanted to pick a fight he had picked the wrong person.
“Drew Noyes got out of his car in a threatening manner – at which point I said – You’re on CCTV but if you wish to make a move I will happily knock you out if you step onto my premises.
“He got back into my car and drove off, as he did so he shouted back.”

Noyes’ attacks on Tewi Gleesons’ and Chris Gleeson’s language schools, quite respectable organisations with city hall contracts  run by a companies which are building a Thai Cultural Centre outside Pattaya, began after Noyes singled out the school for advertising on this site.

He wrote a libelous story saying the school was a source for dodgy educational visas. Mr. Gleeson’s reply to him was an email stating that he was donating US$15,000 to this website.
Internet warrior Noyes believed it and went ballistic on the internet making more allegations and warning people not to donate any more cash as Drummond had a white Porsche and a lakeside house with salas in Bangkok (as opposed to an earlier story in which he claimed Drummond was penniless and living in a 2000 baht a month apartment).
Then by pre-arrangement Gleeson’s advert was taken down for a week and Noyes reacted by printing a story praising the school and its contribution to Thai culture with its construction of a Cultural Centre on the outskirts of Pattaya, and he proudly announced that Mr. Gleesson had seen the error of his ways by removing the ad.
The advert was then up again. 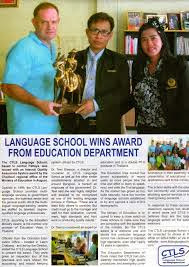 Noyes has picked a hard target. Dr Tewi Gleeson, PhD., is an advisor to three senate committees and teaches Master’s Degree courses at two Thai Universities.She also runs the Tewi Language School in Bangkapi, Bangkok.
Mr Noyes claims to be a personal friend of Khamnan Pho, (Somchai Khunpleum) the Chonburi godfather and his two sons, the current Mayor of Pattaya, Ittiphol Khunpluem, and Sontaya Khunpluem, former Minister of Science and Technology, current Minister of Culture and President of Pattaya F.C.
Prior to arriving in Thailand Noyes was exposed in the American newspaper the Wilmington Morning Star in North Carolina as a man of ‘myriad lies pursued by lawyers with unflattering accusations’.
The paper detailed allegations of fraud, bogus share dealing, and sexual harassment made against him in North Carolina and Florida, and a judgment against him in California now updated to US$72,000.

Noyes understandably left the United States, but he claims he came to Thailand by Royal Proclamation, to help Thailand through the Asian financial crisis in the late 90’s and assist the Bank of Thailand. Needless to say the Bank of Thailand has not a clue as to who he is. During the period he said he worked for them he appeared to be operating beers bars in Pattaya called the Zebra and Lollipop. No longer apparently welcome at the Pattaya City Expats Club, the Optimists, the Rotary (Royal Cliff) etc., in Pattaya he has managed to get a role with an Indian-Thai Lions Club in Bangkok.(Silom 310D) 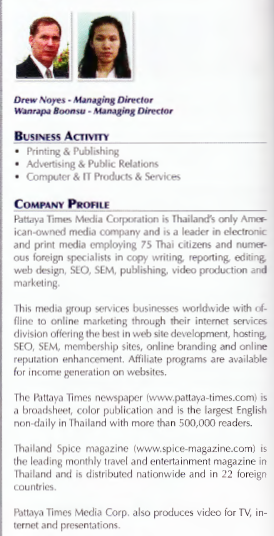 * Drew Noyes formed the Pattaya Times with his common-law-wife Wanrapa Boonsu, printing at the same unregistered printing works as the Pattaya People.
He claimed in the American Chamber of Commerce directory, that he employed 75 people and the newspaper had a readership of 500,000.
However he never printed more than 5000, and as it mainly consisted of stories lifted from the internet and put in the name of his wife and other people, the newspaper bombed. It did however serve to get him into city hall and convince the authorities that he was a man of substance.
Now he uses the Pattaya-Times online to attack his enemies. He claims he has nothing to do with it and that it is now managed by the Aladdin Group. His trail however can be followed on a moonless night.
Right: His company profile in the American Chamber of Commerce Directory 2011-2102.
Foreign specialists?
Services businesses worldwide?

Distributed nationwide and in 22 foreign countries?
Below some of Drew Noyes’ internet domains – but he has a whole series of BlogSpot sites 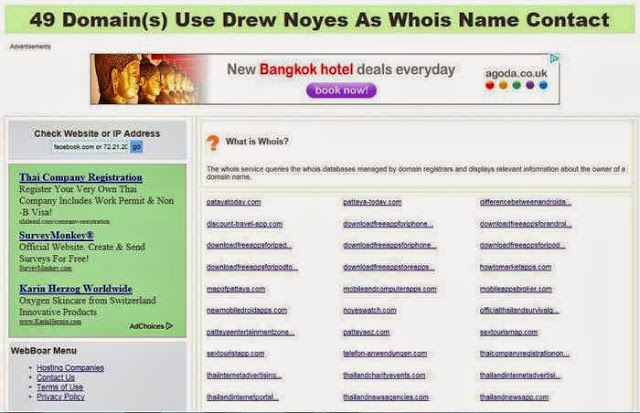 And finally what Drew Noyes said about the CTLS on his Linkedin page:

Noyes site myriadoflies.blogspot.com an attack on Andrew Drummond has according to Alexa one page view. Can anybody guess by whom?