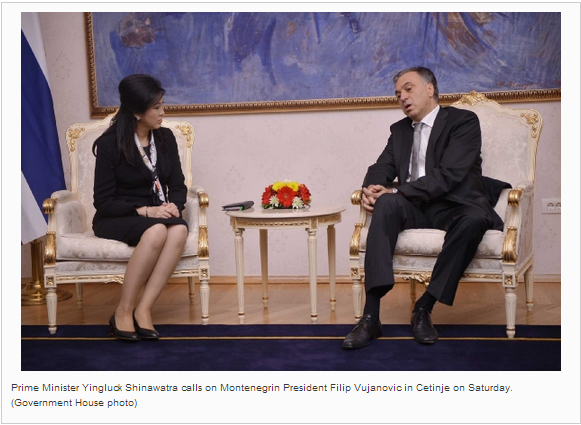 
-It was difficult to keep a straight face reading Saturday’s Bangkok Post to learn that ‘The leaders of Thailand and Montenegro agreed on Saturday to use the eastern European country as a launch pad for Thai exports to other markets in the Balkans’.

I mean, are the editors of the Post having us on? What on earth is the Prime Minister of Thailand doing in Montenegro – apart from perhaps thanking the tiny state for granting her elder brother, the exiled Prime Minister Thaksin Shinawatra citizenship and residency, when larger countries did not appear to want him?

So then we see a picture of Yingluck Shinawatra with Montenegrin President Filip Vujanovic in Cetinje (Population 14,000) and have to wade through all sorts of  seemingly meaningless pap.

The Bangkok Post reported: “Montenegrin Prime Minister Milo Djukanovic supported the Thai plan raised by Prime Minister Yingluck Shinawatra for Montenegro to serve as a gateway for Thai products to enter other markets in the peninsula, Government House officials said on Saturday.

(Another hub in the making? What peninsular?)

“Thailand would be a centre for products from Montenegro to be distributed to other Asian markets”, they added.

“The two sides agreed to more exchanges of high-level officials. Thailand will support Montenegro to use Thailand as the gateway to Asia while it sees Montenegro’s potential to be the gateway to the Balkans and Eastern Europe,” they said.

Oh come on!  The state capital Podorica has only a population of about 150,000. The gateway to Eastern Europe!

Total trade between the two countries is just over US$5.09 – $5 million in favour of Thailand, admits the Post – the price of a small apartment block in Bangkok. That maybe because Montenegro relies heavily on imported food for 80% of all food consumption.

In the first half last year Montenegro’s total exports were worth only €182,3 million, 14,6% less than the same period the preceding year and that was almost all from aluminium and steel which Thailand gets from elsewhere. But its major trading partners are Croatia, Serbia, Bosnia and Herzegovina and Hungary!

Let’s put that in perspective its less than half of last year’s profits made by the German airline Lufthansa!

For heaven’s sake, the country’s main economy used to be as Europe’s smuggling capital under President Milo Dukanovic – the current Prime Minister and former best mate of Italy’s Silvio Berlesconi! It was a gateway for contraband arms, cigarettes, and endangered wildlife and trafficked women. It was the ‘Tortuga’ of the Adriatic. Its been reported that the trafficking of women has taken over from cigarettes as the country’s export income brand leader!

The names Shinawatra and Dukanovic are of course associated with massive fortunes, and er, prosecutions.

Now the economy is officially the service industry – mainly related to tourists – and cash from selling properties to foreigners from Northern Europe, and selling of course to Thaksin Shinawatra.

Milo Dukanovic (sixth time P.M.  He was P.M. when he was 29) was indicted by the Anti-Mafia Commission in Italy!

They finally dropped the case in 2009 on account of the difficulties of prosecuting another country’s Prime Minister!

This is what a teenage friend Ratko Knezevic wrote from the safety of London in his 2006 thesis for the London Business School.

Knezevic reported estimates “that by the end of [the] 1990s, the Montenegrin government was earning as much as $700 million annually from the clandestine cigarette trade.”

He relates that Djukanovic once told him that while Montenegro faced international economic sanctions in the 1990s, the country reaped $300 million annually from the illicit trade in cigarettes and oil.

Whatever the black market amount, law enforcement officials are convinced the contraband trade was a prime earner of hard currency for Djukanovic’s government, which slapped a so-called “transit tax” on shipments by the smugglers.


Sounds familiar if you look at the history of Khun Sa, (Chan Shi Fu) and Hlo Sing Han in the Golden Triangle

Knezevic described it as a stream of contraband cash “flowing into a parallel government budget, which was then used to support the official budget.” – source: International Consortium of Investigative Journalists. (A fascinating read)

Compare that with last year’s €182 million and we appear to have an almost total budget collapse but, ah, I love that expression ‘parallel government budget’.

Anyway the Bangkok Post then reported: “The two countries also signed an agreement on visa exemptions for officials and diplomatic passport holders.”

What on earth for?

Good heavens are they all about to hop it? Could there be a connection to today’s Bangkok Post editorial –

Finally at the end of the story the Post tells us.

There’s nothing like understating the case. Of course people will say that’s how to read the Bangkok Post. They cannot actually call a spade a spade but will somehow get around it. That’s the Bangkok Post having a joke of course. But you have to wonder if the journalists actually use a search engine.

Sometimes I miss the British approach to journalism as in such headlines as ‘B-LIAR!’

Could Yingluck and Vujanovic be singing this duet?