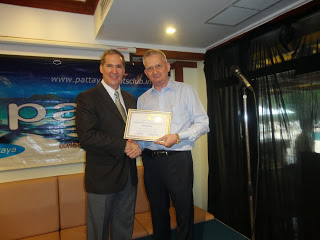 American Drew Noyes the much maligned founder of the Pattaya Times newspaper, who is on trial in Pattaya with his common-law wife Wanrapa Boonsu for extortion, has come up with a novel way of trying to establish with the courts his impeccable background.

Not only has he been putting more pictures of himself with Thai Royalty on the net (well the same one actually that he used when he claimed 14 years in service to the King of Thailand) but now he has entered his children’s birth certificates as testimony to Pattaya Provincial Court.

And to add icing to the cake he has thrown in a few ‘certificates of appreciation’ which he had clearly already had framed and installed in his office.

A classic one is one signed by the Mayor of Pattaya and the Chief of the Crime Suppression Division.
This in essence was for attending a meeting on crime in Pattaya. 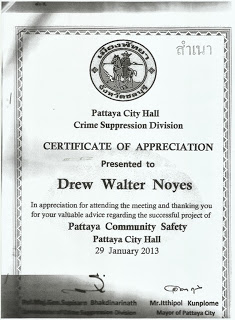 Then there is one for making a speech to Pattaya Expats Club on Law for foreigners in Thailand.

In every case so far he has produced a bundle of papers showing pictures of him with all sorts of local dignitaries.  The boss of the Thonglor Clinic, which he allegedly attempted to extort out of between 7 and 2.3 million baht was even asked something along the lines: ‘Don’t you know how beneficial Mr. Noyes has been to Pattaya through his good works.” To which he replied: ‘Never heard of him’.

Sadly Noyes did not get a phony UNESCO Cross, which Niels Colov seems to have helped dish out to a few oddities in the city.

But Niels Colov’s  is named on the Pattaya Expats Club certificate and the certificate is signed on his behalf. 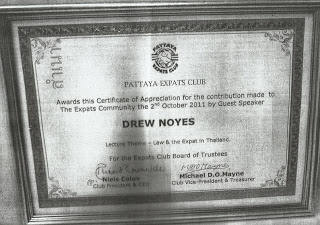 This fascination for awarding each other medals, certificates and citations on the eastern seaboard of Thailand appears to be running out of control – Colov and Noyes have even given each other citations.

You’ll soon be able to get them at gas stations.

Niels incidentally gave Noyes his citation before he sued Noyes and forced him to apologise for stealing his valuable contacts list for a Pattaya directory.

They fell out big time and for a while made highly charged allegations against each other but Noyes has never been able to catch up and have the same array of citations as Colov has on his office walls.

Noyes, while he claims to be the founder of the Pattaya City Expats Club, was never elected. In fact when the time came up for the first elections he had no choice but to hop it.  A circular had already gone around members showing how he used the club to find people to scam…namely members Elena Wilson Singer and Greg George who bought into his National Housing Authority units in Keha Condo, Jomtien, falsely described as having a sea view, swimming pool and tennis courts.

As for the CSD, well I am guess they are wise to his antics now.

Noyes was not present when Andrew Drummond recently gave evidence against Wanrapa Boonsu in the ‘Mangus Evans’ case. Though he did tell an onlooker Drummond was about to get thrashed in cross examination before hopping it when Drummond took the stand. That fierce cross examination never happened after Drummond explained to the court a little of Noyes’ and Wanrapa’s  history. The lawyer had very little to ask.

Drummond was asked what awards he had received as a journalist. Drummond mentioned the ‘Maurice Ludmer Award for Investigations into Racism and Fascism’ as the award he mostly valued. ‘He says he received an award for investigations into the ‘Rainy Season” came the interpreter’s reply.

Eventually a proper translation was produced…by the judge.

Drummond became an undercover Nazi in Europe for two years in the 80’s. This has been translated on Noyes’ websites as saying Andrew Drummond is a Nazi. He also put up a picture of German neo-nazi Michael Kuhnen (taken while Drummond was working on the television programme ‘A Right Turn’ ) and said it was Drummond.

Drew Noyes is a past master at inventing false resumes elevating him to a status which clearly he will never attain. In an addition to the US$72,000 judgement against him in Santa Ana, California, the Wilmington Morning Star also reported allegations that he had walked off with US$80,000 from a project in Carolina Beach, North Carolina.

Drew Noyes out on bail for extortion and out of control