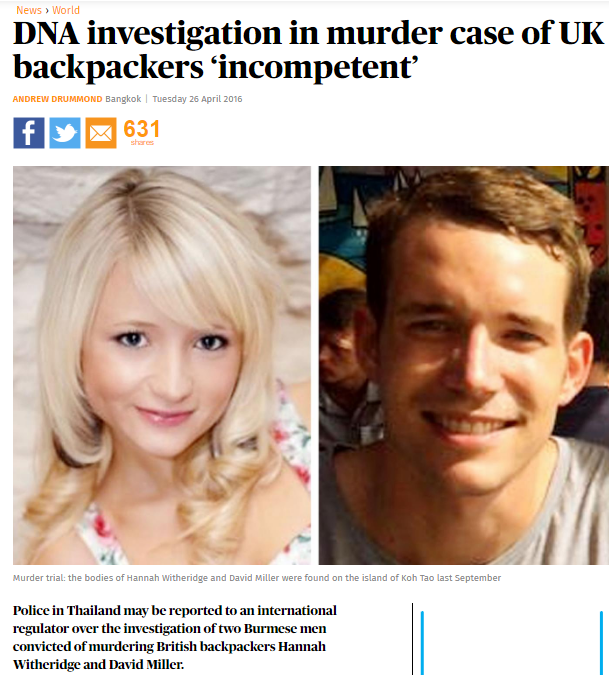 BUT DEFENCE SHY OVER BRINGING THAILAND’S POLICE LABORATORY INTO DISREPUTE

A summary of the appeal by the ‘Koh Tao Two’ against conviction and the death sentence for the murders of British tourists Hannah Witheridge and David Miller appears to totally demolish a sloppy prosecution case in the controversial trial in Thailand. 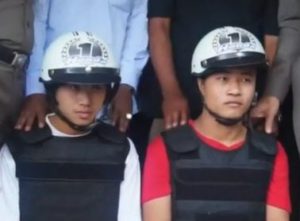 The appeal highlights blatant lies, the cover-up of contradictory evidence, the incompetence of the police laboratory and failure to meet ISO17025 standards amongst other complaints in the trial against Burmese migrant workers on the Thai island – Wai Phyo and Zaw Lin.
As I earlier reported no substantiated evidence of rape was presented at all.

According to the author of the appeal summary Nadthasiri Bergman, British post mortems were carried out in ‘stark contrast’ to the Thai one,and presented the entire procedure with step-by-step photos and point-by-point analysis by the forensic pathologist in charge.” 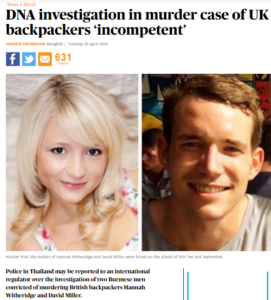 From the Evening Standard

‘The incision discovered inside the victim’s vagina was determined by British autopsy to have been caused during the Thai autopsy, not a result of sexual assault.”

This somewhat demolishes the prosecution motive for the attack, that Zaw Lin and Wai Phyo, both 21 at the time, who had been drinking and playing a guitar nearby, were driven by lust.

In fact the savagery of the attack on the two Britons is much more indicative that THE attack may be have been driven by ‘loss of face’.

Despite a strong appeal the defence have not made a formal complaint about the accreditation of the police laboratory in Thailand.

If that were happen the laboratory could be ‘struck off’ so to speak by the international regulatory body. If that happened not only would it be a massive loss of face for Thailand and the police force but could endanger all of the country’s scientific testing,

Foreign forensic scientists and lawyers say that must happen if not only in the interests of future defendants who face going to jail or even their deaths as a result of manipulation of DNA tests.

But the defence for the time being at least perhaps, fearful of a zenophobic backlash against foreign commentators have so far baulked on this issue.

Andy Hall of the Migrant Workers Rights Networks which is assisting the accused stated simply: “One step at a time”.

A major problem for the international regulator APLAC – the Asia Pacific Laboratory Accreditation Co-operation is of course the Thai court files.

There is no verbatim record of the trial which may sound strange in the 20th century – but no full record is taken of Thai trials, only the audio version of it, which is a precis of questions and answers which the judge speaks into a voice recorder and are what he deems relevant to the case.

Further journalists of course were forbidden to take shorthand notes of the case.

Below is the summary of the major points of the appeal by lawyer Nadthasiri Bergman LL.M.
A 198 page appeal on behalf of the accused Burmese defendants in the Koh Tao murder trial has been filed with the Region 8 Court of Appeals on Koh Samui, Thailand. I regret that the pro bono defense team does not have the $5,500 budget necessary to pay for a proper translation into English.

This groundbreaking case is the first in the history of the Thai justice system where police forensic evidence was challenged by the defense and forced to be independently retested. As we feel it is vitally important the content of this public document be made known to the world at large, I have summarized and translated several of the strongest points of the defense’s arguments into English, and mention a few points of concern not addressed in the appeal as well.

Police claimed DNA collected from the scene was sent to Singapore for testing and determined the suspects were Asian. Thai police experts later stated this race determination was only revealed by testing at Prince of Songkla University hospital lab twenty days after the suspects were arrested. It was later revealed DNA samples were never sent to Singapore. Regardless, this set the stage for racial profiling of potential suspects.

The defendants were arrested on unrelated charges, questioned about the murder before having an attorney present and their statements were entered as part of the prosecution’s evidence. This is a violation of Thai law and grounds for dismissal of the case.

DNA samples from both of the accused were collected without consent and before the were informed of the murder charges.

During interrogation, police appointed a hostile interpreter who could not read Thai. The defendants were never properly advised of the murder charges nor their rights under Thai law.

Both accused testified they were stripped naked by police during interrogation and physically assaulted including punching, kicking, plastic bags over their heads, genital attack etc. Wound and bruise evidence of torture was confirmed by three doctors and one detainee witness.

Chain of custody of mobile phone was never provided, no photo of where it was found etc.

Fingerprints of the accused on the mobile phone identified as belonging to one of the victims were never produced as evidence, raising the question of whose fingerprints may have been found on the phone. In fact, there was absolutely no forensic evidence presented by the prosecution connecting the mobile phone to the accused.

Thai autopsy results for both victims was only a four page typed summary by the doctor. The legally required autopsy file documenting the procedure with step-by-step photos and point-by-point analysis was never presented.

In stark contrast, the British autopsy report fully documented and presented the entire procedure with step-by-step photos and point-by-point analysis by the forensic pathologist in charge.

The incision discovered inside the victim’s vagina was determined by British autopsy to have been caused during the Thai autopsy, not a result of sexual assault.

DNA files presented had the accused names on them rather than a proper sample reference number. This is not possible without pre-knowledge of who’s DNA the sample being tested belonged to. 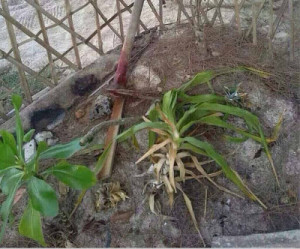 The hoe used in the murder

After results of DNA found on the handle of the murder weapon was disclosed in court to be from the male victim, prosecution admitted they had also found DNA matching the male victim on the handle of the murder weapon, but no DNA matching the accused. This case damaging evidence had not been introduced by the prosecution and raises the question of what other potentially case damaging evidence may have been withheld such as clothes of the victims allegedly not tested for DNA and why blood in the sand at the murder scene allegedly produced no DNA results, etc.

Multiple procedures are required in order to meet ISO 17025 international standards in DNA testing. The chain of custody, method of testing, graph generated and case notes resulting in the analysis report produced are all required in order to allow an independent expert to verify the results. Only the results of the test without any required supportive documents was provided by the prosecution witness.

Police claimed a 100% DNA match with the accused from samples allegedly taken from the victim’s body. This is scientifically impossible in any forensics testing laboratory anywhere in the world. For example, swabs taken from the victim would contain a minimum of three different DNAs producing what is known as a “mixed sample”. Mixed samples can be the most difficult to interpret, and from which a 100% match is never possible.

Above are the main points argued by the defense team as to why the two accused should be found not guilty. There were other important points about the case which were not included as part of the defense’s appeal such as;

CCTV footage of the only pier with boats leaving the island in the hours immediately after the murders was allegedly not examined by police. The accused already admitted they were in the vicinity at the time of the murders, therefore this important point had nothing to do with evidence presented in court related to the accused so it was not included in the appeal;

Blond hairs found in Hannah’s hand were confirmed in court to not belong to either of the victims or the accused. Since the hair was not evidence linking the accused to the crime, it was not included as part of the appeal. While it is direct evidence linking someone else to the crime, the question of who the hair belonged to remains a mystery and an important point, but not one the defense could use in the appeal.

It is the opinion of the defense team that the prosecution’s requirement of proving guilt beyond a shadow of a doubt has clearly not been met. The defense believes this case should be dismissed and the defendants immediately released from custody.