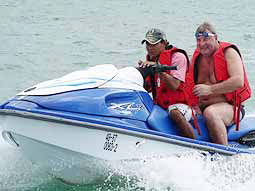 WILL JUSTICE PREVAIL IN THAILAND AGAINST THESE PROPERTY FRAUDSTERS?

– Foreigners, who arrived in Thailand to find that the deeds to the homes they had bought in Pattaya had been hawked to a Thai bank for a loan by the developer, will protest tomorrow at the local office of the Attorney General.

After banging their heads against a brick wall, with seemingly few people in the least bit interested, owners of units at the Emerald Palace condominium on Pratamnak Hill, Pattaya, hope to raise the profile of their predicament and at the same time warn other foreigners of the dangers of buying in Thailand.

Ironically the developer Briton Richard Haughton was a high profile figure in Pattaya.

He was President of the Pattaya-Jomtien Rotary Club and as such this portly figure was often seen about town giving to charity on behalf of the club,.

But Haughton’s biggest charity was himself. He announced and took money on a series of projects, which he advertised in the Pattaya People newspaper, most of which were never built.

When his company Thai Property & Media Exhibition Co. Ltd had sold most of the units at Emerald Palace he gave the deeds (chanotes) to the Kasikorn Bank for a 71 million baht loan for Headland Holdings a company he had set up in such names as his girlfriend, to carry out the switch.

Worse than that – some buyers who had paid in full had not even been allocated a unit. Among the victims was a Royal Marine who had served time in Lebanon and the Straits of Hormuz.

It would appear to be a straight case of property fraud. Not so in Thailand. Neither local police or DSI would take up the case. The Pattaya Consumer Protection Office appeared to be totally disfunctional.

(Foreigners cheating foreigners is a foreigners problem – even though the foreigners carrying out the scams will have local assistance which may take many forms.

Excessive demands are being made by others who may believe there is a honeypot.

Haughton has been kicking around town with seemingly not a worry in the world. And the local press which survives on cash from property developers has with the exception of Pattaya Today remained silent.

But lawyers for Headland Holdings, Limcharoen Glanville and Hughes, incidentally on the British Embassy list, are also fighting the owners, mainly Brits, but also Scandinavian, Russian and Canadian, because they say they are owed in millions themselves in legal fees.

It’s not clear if  part of that cash was used to advise Haughton if he was breaking the law. Below is a letter from the owner’s committee. I suspect it has been toned down.

The question is did the bank know that units had already been sold when they took the title deeds to grant a loan? The fact that one of the bank’s Vice President’s acquired a unit there at a bargain price suggests they did.

The ‘owners’ also plan to move on Pattaya City Hall, the Kasikorn Bank and Laemcharoen Glanville and Hughes.

Will justice prevail? Will Thailand still give work permits to these  people who gain for Thailand nothing but a worldwide reputation for scams?

Meanwhile to anybody thinking of buying property in Thailand. Get a lawyer to check everything!  Do not trust a Brit with a refined accent and a suit and tie.

Haughton has had his Brummie brogue beaten out of him. It only comes out through drink. He was a former video store owner and tupperware salesman – an ideal candidate it seems for the Presidency of a Pattaya Rotary Club it seems.

He formerly worked for Harlequin (Thailand) the local version of a British property company now being investigated worldwide.

Below is  statement from the buyers. I have not included all their names. When you get to the paragraph when they start applauding people I think you may find they are just following local custom.

Buying property in Thailand is easy when the buyer is advised by a good lawyer. WHY? Because many of the sellers which includes real-estate agents, banks, law firms, developers and builders see themselves as being able to bend or be above the law.

The sinking funds can disappear, even though promised to be used for major building work in the years to come, as the building gets in need of general repair.

They can forget to give contracts that are compliant with the law. They can delay building, even not build, how? They lie to buyers, or nearly finish, then apply the law to the buyer to pay up or lose everything. The law firms can by whatever means available give their client the builder developer a free ride, no duty of care, no recognition of the buyers legal or consumer rights.

The law firm can broker loans with banks, using the deeds (Chonot) of your property, have accounts amended to facilitate lending criteria, then adding a first charge to Chonot (title deed), at transfer stage with the land Office, unknown to buyer.

The banks can accept Chonots with their charge on against a loan, sidestepping the facts of real ownership, even ignoring the very basic principles of banking law and their compliance as stated on their charter to the public and consumers using its services and their shareholders rights.

The land registry office and the issue of Chonots should one would think be a safety net, catching out any fraudulent claim on them. The C J P Juristic person appointed by the developers management team, maybe not the best person to rely on for factual information that conflicts with their employers statements to Land Registry office or the circle of contempt.

Consumer Protection, Police, D S I and local government offices help as much as possible. But many situations are deliberately structured and made so complex that the time required to decipher and produce clear evidence of deception is beyond the remit of the consumer bodies willing to help.

We the undersigned plead and seek the protection of the most Honourable Office of Attorney General, the Banking financial compliance financial services, the Judicial reform group, the Land Registry Office, Government Officers and Gentlemen elected to protect the people.

We who know of and those who have suffered for years now financially and physically, due to the criminal deceit and deception of Builders and Developers mainly from outside Thailand, using their influence and the amities afforded to them by the Thai commercial business system, media, real-estate, Banking and legislative practice.

Plead and beg for this to stop, we beg you to intervene on behalf of those who have and are about to suffer more with the loss of their condos, due to the latest case between Kasikorn Bank and Headland holdings represented by Limcharoen Hughes and Granville Ltd. Pattaya Court on 13-12-2012 at 1-30 pm.

We applaud and give thanks to the local and regional Police, the D S I and Consumer Protection in Pattaya for their help.

Those who have invested with their hearts and minds and, in many cases life savings, had been promised a better life. The young married couples just starting out, retired, elderly people in the autumn of their life, last years of their retirement. Those promised a life in a climate beneficial to their health and happiness. Now brought to their knees financially and physically, we would ask you give this your best attention, most urgently before the system exercises the law for the unjust and refuses justice for the law-biding community.