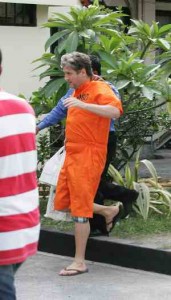 The British father of six-year-old Kitty Ponder broke his silence today to say Lindsay Sandiford set himself and his partner Rachel Dougall up with a damning haul of cocaine on the holiday island of Bali.

As Bali police continued an investigation today into the source of the drugs supply to high society and party goers on the Indonesian holiday island, Julian Ponder put the blame squarely on 55-yr-old Lindsay ‘the mule’ who started the hunt.

“I was the subject of entrapment by Lindsay, who knew my daughter was going to be 6-years-old shortly after her arrival,” said Pender.

“Having been caught she aided the police surveillance and brought the cocaine to me wrapped as if it was a present for my daughter.”

Speaking through his lawyer he added: “I never ever touched the drugs or was aware that my daughter’s present was in fact drugs.”

Lawyer S.H. Suroso said at Bali Police Headquarters: “Julian is adamant that Rachel never took drugs. He has admitted that drugs found in his home were his, but insists they did not belong to Rachel.

“She did not touch drugs”, he said, “but drank quite a lot.”

Photographs supplied to the SUN show that the cocaine haul was indeed wrapped up in pink paper with the motifs ‘Enjoy Sweet Candy’ and ‘New Candy’. But Ponder’s claims are unlikely to have any effect on the Bali Police investigation. Police insist he was caught with the drugs in his Toyota Rush 4×4 SUV and that “both adults living in the house must take responsibility for the drugs found there.”

Meanwhile Bali police say they are looking for another Briton and a Thai national, who they believe they were higher up in the cartel. Lindsay Sandiford is reported to have met the supplier in Bangkok – and the supplier claimed he would follow on a later flight.

A police spokesman said: “We believe that this syndicate is the source for cocaine which has been flooding places where rich people congregate in Bali” By rich, he said, he meant higher income earners and ‘quality tourists’ visiting more expensive venues and nightclubs.

One such place is the Ku Dé Ta, a very popular bar, club and restaurant in Kuta, where many people start the evening by watching the sunset over the beach.

The bar has a strict ‘no drugs’ policy and even its clothing policy prohibits customers from wearing T-shirts advertising beer, or football club shirts.

It was here where Ella, the Indonesian girlfriend of Paul Beales, from Milton Keynes, worked as a meeter and greeter.  Paul Beales was the fourth Briton to be arrested in the sting.

He has lived in Bali for 15 years and has two daughters aged 6 and 4 with Ella.

At their villa home in Kuta a maid came to the door to say that Ella was not available. “She is not renting here any more from next month and has to plan to take care of the children.”

Yesterday British consular officials moved to offer help to Kitty, who is being looked after by a maid and a gardener in Julian Ponder’s walled villa, 15 miles north of Denpasar. Funds are now being made available through the couple’s credit cards to pay for her upkeep and the maid and gardener’s salaries.

But longer terms plans are being made to have her returned and educated in Britain, in which case she may have to be adopted by her grand-parents.

Kitty is unaware of what really has happened and has been told her grandparents are coming to see her.