Another Enquiry, Another Promise, Another Death.

A 63-year-old Briton drowned after being caught in a ‘rip’
off Karon Beach in Phuket (Wed) leading to a local hospital director to call
for faster emergency service response.
The Briton was named as Edward Joseph Brookes and is
according to Phuketwan is one of at least 30 tourists who have drowned around Phuket this
year.
This is a somewhat alarming statistic and suggests that
measures which the local authorities said they would put in place are not
working.  Various Embassies, including
the British, have made representations about marine safety to the local
authorities.
While red flags have been purchased for some beaches,
suggesting it is not safe to swim, nobody seems to know exactly what the
problem is. Rips can be spotted, and  often
occur at the same places. The locals should know where they occur.
However it appears in many cases they do not want to stop
foreigners having a good time.
The latest death brought a call from the Director of Patong Hospital,
Dr Sirichai Silpa-Archa, for faster responses to rescue and revive people,
reported Phuketwan
”Why don’t they close these spots where people drown?,” he
added. There are several ”stationary rips” on Phuket beaches that regularly
claim new victims. Not enough lifeguards are hired to cover all of Phuket’s
long west coast beaches.

Dr. Sirichai has a famous name. Could he be the local Sheriff up against the Mayor – as in ‘Amity Island and ‘Jaws’?.

ESCAPING A RIP – FROM WIKIPEDIA
A swimmer caught in a rip current should not attempt to swim back to shore directly against the rip. This risks exhaustion and drowning. It is pointless trying to fight against a rip current because the rip current will always win. A rip does not pull a swimmer under water; it simply carries the swimmer away from the shore and out to sea in a narrow channel of water.
The rip is like a treadmill which the swimmer needs to step off. The swimmer should quickly recognise what is happening, then remain calm and swim parallel to the shore until he or she is outside of the current. Depending on the situation, the swimmer may need to travel a hundred metres (or more) parallel to the shore before reaching a place where they are able to swim back to dry land. When attempting to swim back to shore, locations to aim for are places where waves are breaking. In these areas, floating objects are generally transported towards the beach.
A swimmer in a strong rip, who is unable to swim away from it, should relax and calmly float or tread water to conserve energy. Eventually the rip will lose strength, and the swimmer can swim at a leisurely pace, in a diagonal direction, away from the rip but back to shore. Coastal swimmers should understand the danger of rip currents, learn how to recognize them and how to escape from them, and swim in areas where lifeguards are operating, whenever possible.

Below last year the Phuket Gazette showed a picture of a a life guard pointing out a ‘rip’. That’s fine for the camera but do they do this special service for the tourists – like those on the left – in fact are they able to? 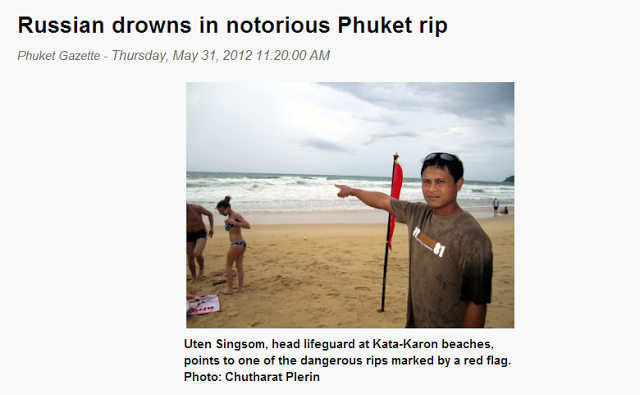