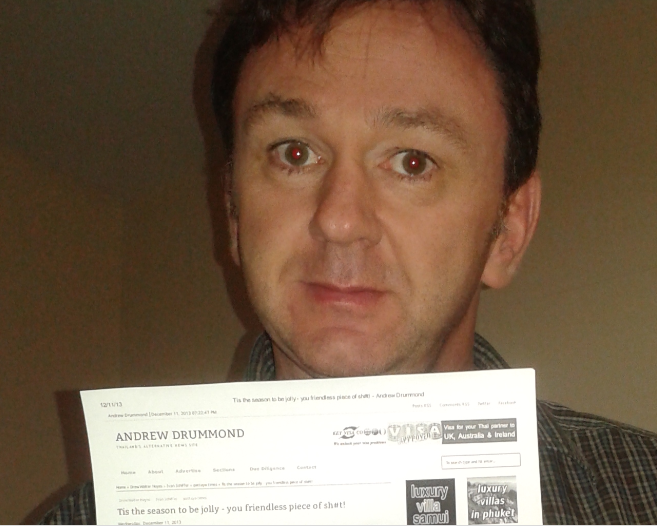 ROYAL NAVY: ‘GOUDIE? HE COULD NOT HAVE ACHIEVED A LOWER RANK IF HE TRIED’.

Brian Gerald James Goldie, known in Thailand as Brian Goudie, has been furiously fighting for his honour against multiple perceived enemies both here and abroad, claiming lies are being spread to ruin his, er, reputation.


Hot after the appearance in a Samui court of fellow Scot David Hanks – the former brothel owner with an unblemished record and  new career in furniture repair, in a Thai factory nobody can find – Goudie, 47, from Falkirk, has been writing furiously to Fleet Street papers in London and the email he uses has been has been put on at least one news department’s ‘hoaxer’ list.

Goudie has been trying to tell the editors that a former client of his law firm Alba Laws ‘is a paedophile’ despite him being acquitted at the first court and now being released on the order of the Supreme Court. “Why do you not check facts carefully before publishing?” – he demands to know from the editor of the Daily Telegraph in London.

Meanwhile the two main libels against him are out and out lies, he claims.
He was a Captain in the Royal Marines, he insists.

There had been some confusion, he claims, because he had been accused of claiming to be a Royal Navy Captain which of course, he added, really was not true. But he had never claimed that.

But he had indeed been a Captain of the Royal Marines. He has his papers to prove it, but unfortunately they are not available right now.

This has caused some mirth at Royal Naval (Communications) Headquarters in Portsmouth in the UK, but also attracted some serious reaction too.

It is of course an offence to bring the Navy into disrepute, and also bring into disrepute the Queen’s Commission, though I do not think the British Royal Navy will be taking this foreigner to court on a Thai holiday island…they’ll leave it to the marines!

But he added: “A man of this name did sign up in the Marine Reserves (weekend soldiers) in 1987. He achieved the rank of marine. There is no rank lower than that apart from recruit. Is that clear? He did not achieve the rank of Lance Corporal.’

Goudie is also fighting furiously claims that he was sentenced to six years in Australia for stealing over Aus$400,000 from a West Australia mining company. He has been telling friends.

“I only spent 60 days in prison and I won my appeal against conviction,” he insists.

This is also a lie. The court and discharge records clearly show that Goudie spent two years in jail in Hakea Prison, WA, prior to his trial. Having completed a third of his sentence he was eligible for parole and released not long after conviction. There was no appeal against conviction.  I believe the Australians took the view that they did not wish to continue to pay to look after someone they were going to throw out of the country anyway.

Besides of course he had studied law in prison, perhaps he could put it to good use.

And indeed he did. In Thailand he set up the company Alba Laws, which of course has never paid any tax.

He then set about intending to defraud a British businessman out of his Bangkok condo – which he has now agreed to return on pain of criminal conviction – and currently stands accused of cheating a 75-year-old American woman out of 7.9 million Thai baht – a charge which he is now also trying to buy himself out of (It is legally possible in Thailand and the victims usually take the cash) at Pattaya Provincial Court. He had claimed he was a qualified British barrister and Scottish advocite – well that’s how he spelled it on his CV!

#BrianGoudie or rather #BrianGoldie goes into court on Koh Samui on June 12 to give evidence against the owner of this site claiming that the pictures on this site are against the Thai Computer Crime Act.

This site has of course published a number of photographs, which have been clearly been photo shopped and even published elsewhere.  We quite clearly defend our right to ridicule a person who is known for cheating foreigners.

This site is also an international site registered in Britain and hosted in the United States. If this ruling is allowed it allows Thailand to be the arbiter of the world’s morality.

Put it this way, if this is upheld, were Adolf Hitler or Thaksin Shinawatra to be available right now and the picture was published on the New York Times website, they could both come down to Koh Samui and sue….. Any assets of the New York Times in Thailand, perhaps the regional correspondent’s ‘Notebook Pc’  could thereafter be seized, wasting years of Thai court time!

Meanwhile #DavidHanks, who is also suing for libel, and whose sister told the ‘SUN’ newspaper in Scotland that she did not approve his ownership of the Masquerades brothel in Keysborough, Victoria, Australia, is to answer questions about his alleged ‘mafia’ connections in Pattaya.

His standard answer is: ‘That is not relevant to this case.’ He is suing Andrew Drummond over a story in the SUN newspaper headlined -‘OAP* from Girvan is Mafia Enforcer’.

The story was based on the evidence of Dr. Michel Goulet, joint owner of the Thonglor Clinic during the trail of #DrewNoyes and #WanrapaBoonsu for extortion. Under British law court reports are covered by absolute privilege.