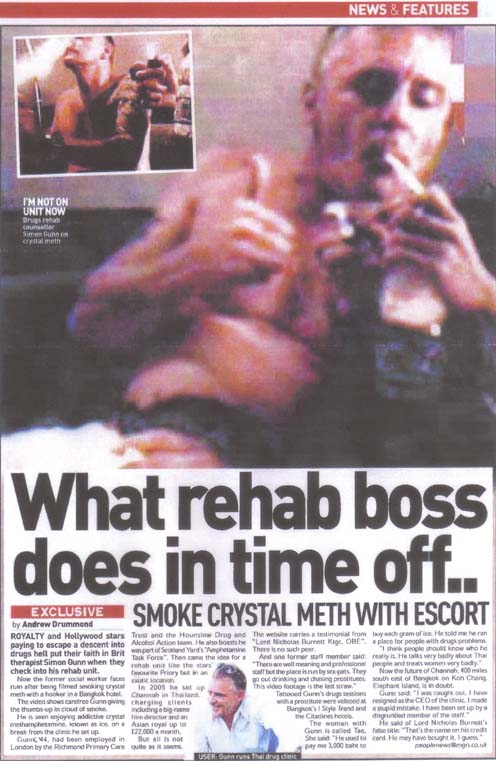 A 31-yr-old property heiress attending a Thai ‘Celebrity Rehab’ clinic is reported to have fled after being sexually assaulted on New Year’s Day by the clinic’s gardener.

And in another incident there was a stand-off between staff of two Thai Celebrity ‘Rehab’ clinics after a woman patient asked to be transferred from one to the other. The incident did not come to blows, but the language was blue and Anglo-Saxon.

In the first incident five days after checking out the woman was pursued by one of the clinic’s directors, who returned her prescribed medication, it is claimed, only on the proviso that she that she signed a ‘confidentiality’ agreement forbidding her to talk to the media about the clinic for a period of five years.

The woman at the centre of the controversy had been entered by her family into a US$22,000 one month course at the clinic and there are counter accusations that she had not conformed to the course rules. Thus after checking out two weeks early by mutual agreement, she was told there would be no refund.

The woman had told friends: ‘They only gave me the medication I arrived with on the condition I signed the confidentiality agreement. But when they gave it back to me it was incomplete. The medication included stuff belonging to another patient. His name was all over it.’

According to  sources, the euphoric Thai gardener  had entered the patient’s room to return a computer thumbnail drive belonging to her and which he had found.  The incident in which he had allegedly grabbed her breasts and wished her a sabai di pi mai or  ‘Happy New Year’ happened on her veranda. He was removed from the premises at the time.

The woman, who was being treated for alcohol dependency,  claimed the gardener was ‘reeking of alcohol’.  Let alone the assault, clearly she was not impressed with the smell of ‘Lao Hai’.

Patients at alcohol and drugs rehab clinics are by definition ‘troubled’.  They are also prone to eratic behaviour.  As such their complaints can be tainted.

The women had also complained that staff at the clinic were like ‘small apartment blocks’ in size and hung around a lot smoking and eating. It did not look like a professional set up, she is reported to have said. The staff ‘showed little respect’ and when she finally checked out nobody helped her with her bags.

Her descriptions of the staff appear to have come from her background. Her family own a lot of large buildings.

In the second incident earlier this week there was a stand-off between two other foreign run Thai Rehab clinics when a patient asked to be transferred from one to another – not an unsual occurence in the business.

The clinic staff were obviously reluctant to release their patient after just one night to the staffer from the other clinic who called to arrange the pick-up.

He said he  was subject to a torrent of abuse and on arrival felt he was in a threatening situation.

The New York staff member in question said: ‘It was like the Wild West. I was genuinely concerned I might be attacked’.

He clearly resented the insults and threats from the Brit director of the other clinic, whose medical experience seems to have been limited to teaching and property dealing in Thailand, but who nevertheless in that role had seen ‘the effects of alcohol and drug addiction throughout Asia’.

The clinics cannot be named  but the incident again spotlights a growing local alcohol and rehab industry in Thailand which remains largely unmonitored by the Government’s Ministry of Health.

Although the incidents were not major there are indications of a turf war going on in Thailand and the Ministry of Health has I understand been asked to ‘adjudicate’.

The Thai government has been promoting the country as a hub of ‘medical tourism’ so action may be mute.

Last year at the Channah Alcohol and Drug Rehab on Koh Chang, its founding director Briton Simon Gunn resigned after being caught on camera smoking what appeared to be crystal methamphetamine with a Thai prostitute. He  admitted his lapse.

Part of his introduction to patients was to tell them that 90% of women in Thai jails were there for drugs.

(Above the ‘reality’ show)

One rehab clinic gets its patients to sit down once a week and watch the the American reality television series ‘Celebrity Rehab’.

Its a series where minor Hollywood celebrities, whose reputations are already down the pan, appear to lose the last semblance of dignity that they might just have been able to hold on to.

Unlicensed rehab clinics are not legal. A search of the web reveals that only one such clinic in Thailand claims to be licenced by the Ministry of Health. In fact Breathing Space in Chiang Mai, describes itself as ‘Thailand’s licensed and legal addictions clinic’, suggesting there are no others.

But I cannot put my hand on my heart and recommend any rehab clinic in Thailand over any other as of course this is not my field of expertise. All I can say is that feeling in the business here are running high.

Comment: This reminds me of the Pattaya Pie Wars years ago when rival groups of sausage and pie-makers went to war with billiard cues and balls. I would say it was an ‘upmarket’ version of this, but it probably isn’t.

What gets me most is the claim that the staff refused to help the ‘heiress’ with her  bags to the taxi….after her family paid US$22,000!  No class.

And finally if a ‘Celebrity Rehab’ clinic has to resort to publicly sue its clients how does it justify its own commitment to confidentiality.

If I have missed out any licensed clinics I will be happy to include them here.