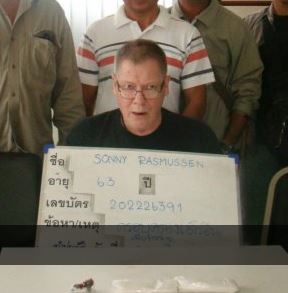 BUT ITS TOO LATE TO UNFRIEND HIM
In the old days, and they probably still do, when police
kept files of criminals, they also kept files of ‘known associates’. That way
they could get a much broader picture of which criminals were associated with
which other ones etc.

Now it seems some of the older criminals or ex-criminals do it for them – It’s called facebook!
At 63-years-old I would have thought that Dane Sonny
Rasmussen was a bit long in the tooth for the heroin trafficking game. I’d be happy with a mug of Horlicks. But
there is his face staring out at me from the web page of the Daily News.
He has been arrested in possession; it is alleged, of heroin
and cannabis worth 200,000 baht.

Well that’s what I guess it is worth up in
Pai, in Mae Hong Son Province. He allegedly had 77 grams of heroin, half of it
already packed up in 2 gram sachets although the pictures here do not seem to
show it. The cannabis was negligible – 1.68 grams. 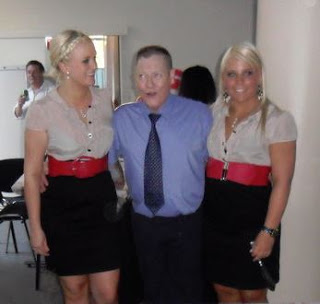 Police appeared to be waiting for him at a checkpoint. They
say he has admitted the offence.
He bought the stuff off a Lahu woman, he said.
I’m guessing if the stuff was packaged up so early it was for a local
market.
His face is not the picture of happiness he had on his
birthday party in Copenhagen with a couple of blonde Danish floozies on either
side.
If Thai police had checked his Facebook page they would have
found this Facebook friend below.
He is of course Lonne Fristrup Jensen, one of
Denmark’s notorious career criminals, who was into drugs, prostitution,
enforcement, almost anything you could think of. His territory was Vesterbro in Copenhagen – but he lived in Pattaya until his arrest, this time for an arson conspiracy.
Lonne is also a long term friend of Niels Storm Martens
Colov – yes the Colov who is group leader of Pattaya Foreign Police Volunteers –
and seemingly chums with every influential person under the sun.
Colov of course is another old Vesterbro boy.  Vesterbro is where Copenhagen’s
one time red light area was located near the central station. The area was popular in the Sixties
and Seventies, when pornography was legal in Denmark, and few other places, and
Copenhagen had a thriving sex and prostitution trade. Now the area has become quite trendy and arty.
Niels Colov is also great mates with Lonne and with another old time villain Leon Owild the characters to the left in this picture.

There guys are of course all reformed. They have done their time and I can in no way suggest or even mean to suggest that they could somehow be involved.
Some ten years ago the Jyllands Posten newspaper in Denmark ran a story suggesting that in some way Colov was involved in a heroin trafficking operation.
That was based on the fact that he was the subject of a Danish police investigation. Dangerous indeed. How many police investigations go nowhere?
Colov sued and won, but during his libel case was forced to admit that he had been jailed for pimping coercion etc in, er , Vesterbro, of course.
If Sonny is banged up I guess he may have difficulty unfriending these
people. He’s going to need some influential people to get him out of the mess
he is in.
As for his friends of course they have all reformed and become Buddhists, or vegetarians, even social workers, benefactors etc. totally discrediting the T-shirt slogan ‘Good Guys Go To Heaven Bad Guys Go To Pattaya’.

In fact they are so reformed they could have even shopped him!

(Owild has even been giving lectures to young people saying do not become a crim like him)
In fact as the following picture shows even Sonny mocks the very thought and, as if to demonstrate his point – has got the T-shirt himself. 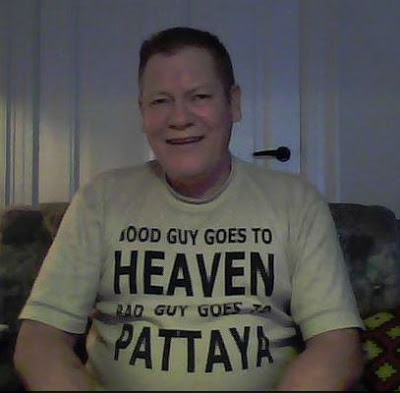 Of all the reformed Danes who arrived in Pattaya in the 70’s perhaps Lonne Fristrup Jensen’s ‘Road to Damascus’ conversion is the most remarkable.

“He has been convicted numerous times for drugs, robbery, receiving stolen goods, violence, alcohol and cigarette smuggling, pimping and extortion. He went for the first time in 1963 into a juvenile prison.
In 1992, he received six years in prison as one of the ringleaders in a Danish league from Pattaya in Thailand, which smuggled huge amounts of heroin to Denmark. In Pattaya ‘Lonne’ was in the inner circle of Danes in the seaside resort that sent smugglers to Denmark with heroin. Two of the Danish gang’s couriers were arrested in Thailand and got life imprisonment.
One, a pensioner was later pardoned, while the other, Thomas Darboe, in 2001, was extradited to Denmark, where the court of Gladsaxe the sentence of the Thai court was reduced to 15 years in prison”.

PS: Its not a Pattaya story – but the Pattaya People has a local exclusive on this one.