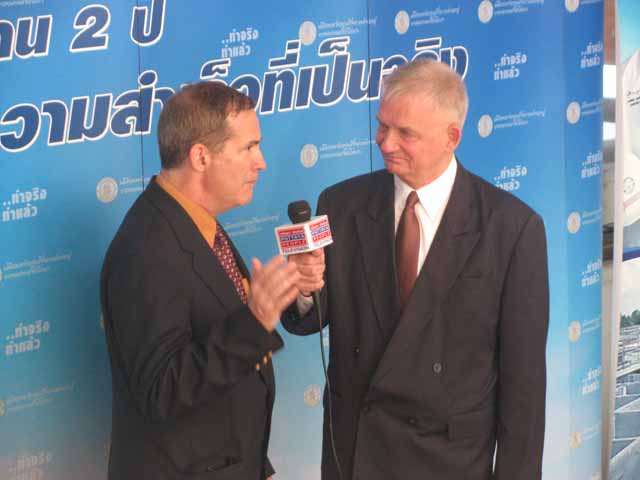 From ANDREW DRUMMOND, Bangkok
August 26 2011
The publisher of the Pattaya Times, well known ‘American lawyer’ Drew Noyes, failed to attend a hearing in room 12 of Pattaya Provincial court this week, as he had to host a seminar on ‘Insight into the Criminal Proceedings for Foreigners in Thailand.
Noyes, is facing a writ for libel, issued by lawyers acting for Andre Machielson, a well-known Dutchman in the resort. The truth will be decided by a court in Pattaya.
Noyes has been told to return to the court next month to deal with Machielson’s demands for damages, which included front page apologies in Pattaya newspapers for three weeks running and a cash sum.

Drew Noyes: ” I hold a 99.9 percent rating  in the ranking of more than one million professionals worldwide.”
Sir Neils Colov of Istegade: “Professional what?”
(*Click here To get this rating press the shield and sign up – Americans only though)
++++++++++++++++++
Andre Machielson’s whispy white beard has made him a favourite Father Christmas at children’s charities during the festive season.
While running a home security company, in his spare time he also performs as Captain Treetops with well known children’s entertainer Dr. Penguin, both of whom make guest appearances on Thai television.

Andre as Captain Treetops with Dr.Penguin in Lisu country in the Golden Triangle. This is no evidence, however, that they are running mule trains across the Burma border.
As Mr. Noyes claims to have a degree in journalism it is odd that he did not spot the potential danger in the libel. But Mr. Noyes also claims to be an American lawyer, which appears to be greatly exaggerated.

Noyes’ advert on Teakdoor.com
(Since this article was publish Noyes has removed this section of a revolving banner – AD – Aug 31 2011)
Actually here at drewnoyes.com he claims to be the ONLY American lawyer certified to practice in Thailand which is really pushing the boat out a bit.
(Since this story was publish Drew Noyes has now amended this to read the ‘only American certified to manage licensed Thai lawyers in Thailand’. AD-Aug 31 2011)
Noyes made the allegation on the website noyeswatch.blogspot.com  apparently set up by a group of expatriates who are not enamoured with him.
He hates this website understandably and has set up clone websites, and scores of others, to actually publicise what a great achiever and all round nice guy he is and how he can trace his roots to when one of his ancestors was rewarded with lands for his heroic part in the Battle of Hastings, and how he has given 14 years of service to a certain monarchy.

Noyes was able to explain to the court through his lawyer that he was unavailable as he was, at the time stipulated (1 pm on Wednesday August 24) hosting Chonburi Chief Judge Visit Sripibool and Presiding Judges Mahachai Srithongklang and Charoenchai Asawapiriya-a-Nan.

Contacted by phone Andre Michielson (right) said he would like to defer comment but he was ‘satisfied the case would be judged with impartiality’ if it came to that.
I managed to catch up with the Noyes at the seminar in room 401 on the fourth floor of Pattaya City Hall where a packed room of foreigners was eager to lap up the knowledge about to be imparted, or, perhaps more so, wanted to know why Thai justice was not working for them.
Noyes oddly pointed out to the assembled masses that the judges were totally on top of the Thai laws of libel, a bit of a non-sequitor, but I suppose it was on his mind,
There seemed to have been a misunderstanding. Readers of his Pattaya Times and the ThaiVisa.com forum were invited to submit questions, but it was clear from the speakers that they believed they were there to explain Thai law to foreigners, which they did very well naming every international treaty Thailand had ratified.
In fact there is little wrong with Thai law as such. It’s the application people get confused with.
At the close of the meeting few questions were heard I guess – and Thai Visa closed down its thread.

I say ‘guess’ because I left early as I did not have time to listen to a lecture on law no matter how generous the judges had been with their time, besides Noyes had already also slipped out, which left some embarrassing silences.
I caught up with Noyes being interviewed in a stairwell by his former arch-enemy, the beknighted Niels Colov of the Pattaya People, who was there to lend his ‘What did you learn in school today?’singing Danish touch for Pattaya People Television.
Interestingly not so long ago Niels Colov also threatened to sue Drew Noyes over (false) allegations that Colov was assisting a ne’er-do-well who was conning investors in Pattaya. They announced their reconciliation here (linked at end of story)
COMMENT: Drew Noyes and the Internet
A  quick google of Drew Noyes in conjunction with Pattaya will immediately reveal a man who appears to be possessed with controlling his image on the net.
Various auto-biographies appear on a wide range of sites. In essence he claims Thailand is grateful for his presence. He has had a succession of Thai ‘wives’ and boasts many children.
He consorts with Ambassadors, royalty and the bosses of Pattaya city, he says, and has the pictures to ‘prove’ it.
He promotes an air of ‘ I love Thailand its culture, food, women etc’ possibly to garner local support, while employing at his office what are known locally as the ‘Facebook Filipinas’.
Noyes has set himself up as something of an expert on the internet and libel laws and he penned this piece on websites in Thailand through his former assistant New Zealander Jason Griffiths, a few months ago which is worth repeating because its such an amateur attempt to disguise manipulation of his own newspaper for malicious purposes. He is actually talking about www.andrew.local but he removed my name after a few days later.
Cloak of secrecy
The piece appeared after I revealed his involvement in the defence of a series of American pornographers, who were released of all charges under a cloak of secrecy after being arrested by Pattaya police – and reports of their arrests were wiped from local newspaper websites.
Perhaps angry that he was not totally in control he emailed me to warn me he knew the ‘No 1’ guy in Chonburi.
This is part of the Pattaya Times piece:
‘Authorities questioned say Thaivisa.com, Pattayaaddicts.com, Teakdoor.com, Pattayasecrets.com and other forums and news-based websites in Thailand, popular in Pattaya are acting in accordance with the law and removing user-generated content as soon as they see a potentially damaging posting which could cause legal problems.
“However, smaller, poorly monitored, one-man blog has had many complaints made by individuals, under investigation. Calls for ceasing and desisting have gone unanswered by the blog owners in some cases and those bloggers are subject to arrest under the Computer Crime Act,” Noyes added.
“An English language blog operated from Bangkok is now being investigated by Thai police because the purpose is to defame Thailand, its institutions and some prominent foreigners living here, it seems. Yet, ironically, the blog under investigation is operated by a Brit who is an unemployed journalist living in Thailand.”
“Numerous complaints have been filed against him and his blog. TAT, the Royal Thai Police, the BOI and the British Embassy in Bangkok are copying his postings to appraise the damage caused to reputations and to take action ,” a Thai private investigator working on behalf of a foreigner who was smeared on the blog stated.
Now, how much of the above written in an ‘award winning’ provincial English language rag in Thailand is total fiction?  No, no prizes for guessing.
But here are a few clues. The Thai authorities are unlikely to give their blessing to ‘Pattaya Addicts’ which used to hold competitions for who could have sex with the most women from Pattaya Soi 6* in 24 hours, nor to Pattaya Secrets, which has a ‘Trip Report’ section in which sex tourists publish the photographs of their ‘conquests’ and invite comments.

Nor indeed would the Thai authorites give their backing to ‘Teakdoor’ if they knew what this site also contained. Teakdoor, which Noyes sponsers with his banner ‘American lawyer’ headline, is run by a former East London builder, called Eric, 46, writing under the name ‘DirtyDog’ (right) who is as mad as a wet hen, an internet warrior who shows off his hand gun on the web, but who in real life seems a bit of a dork.
Libel is his stock-in-trade and he is barely able to construct a sentence without the use of ‘f&%$ing!, c$$k!, c&nt! etc.  He called a Thai woman journalist and editor a ‘dirty whore’ and has a specially bad place in his heart, he says, for Niels Colov. His only defence if anybody bothered to sue him for libel would be to claim he was certifiable.
Finally while the British Embassy, BOI, and TAT, etc are hardly likely to be appraising damage and the Royal Thai Police have nothing to investigate, the Embassy certainly has certainly had something to say to Drew Noyes.
Earlier this year a highly libelous letter along the lines of the above Pattaya Times article, but less mincing, was posted  on the Scandasia site allegedly from Howard Miller, the British Honorary Consul in Pattaya. It was of course not from Howard Miller. In fact the email tracked back to:
Email:ewpwebmaster@gmail.com Admin ID:CR50039279 Admin Name:Drew Noyes Admin Organization: Admin Street1:157/31 Soi Somboonsuk Admin Street2:Moo 12, … a fact which was confirmed by officials of the MCIT, Ministry of Communications & Information Technology.
This is one of Noyes’ old email addresses for his marriage/Thai visa business.
Miller and Noyes have exchanged words
Footnote 2: For first time visitors to this site (needless to say old hands will know already) this is not a site set up to defame Thailand as Noyes claims. Far from it, this is a bona fide news, investigation and comment site. We like it here, but we do however do a certain amount of investigations and point out where things can and have gone badly wrong and are helped by some good Thai people in that process for which we are always grateful. Despite threats along the lines of ‘I know the No 1 man in Chonburi’ we are not about to be pushed around by the likes of Mr. Noyes.
The real reason I was down in Pattaya was on a commission to report on the murder of the President of the World Croquet Federation an incident which was being reported abroad, as is often the case, before the local press got wind of it.
This is Pattaya – you just can’t make it up!
(unless you run a local newspaper)