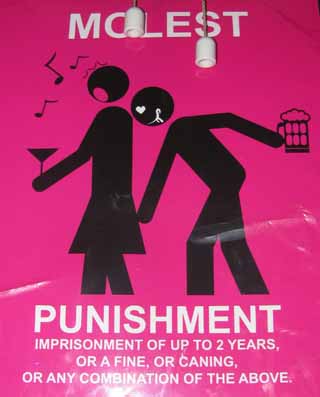 From ANDREW DRUMMOND,
Singapore
Pictures: ANDREW CHANT
August 7th 2011
British tourists heading for Singapore have been warned to avoid situations in which they can be scammed and threatened with a thrashing with a rattan cane for molesting women.

Following the arrest of 34-yr-old Briton Austin Cowburn,  from Manchester, who was picked up in the city’s Clarke Quay bar and restaurant area after allegedly pinching a girl in the bottom in a night-club there, warnings have been put out not only by the Foreign & Commonwealth Office, but also on internet forums.

Left: A confusing poster. Is the molester in love? -See his eye – or is he in lust? – look at his mouth.
Protected by the act are also Thai, Indonesian, Filipina, and even West African prostitutes, who have flooded to the wealthy island state, to ply their trade, seemingly with some sort of approval, as nothing bypasses the authorities in Singapore.
Abuse of the well-meaning laws could leave men open to blackmail and extortion. Such laws to protect women exist in most civilized countries.  But Singapore’s style is to issue the warning then rigorously prosecute.

The warning is couched in diplomatic terms but it is as strong as can be made by the High Commission acting in a ‘host’ country.

Mr.Cowburn with lawyer Thangavelu at Singapoe Subordinate Court on Wednesday
On the ‘Travel Safety Hub’ of one website the author writes:  ‘This is how it works. Travelling businessman cuts loose at a nightclub, has a few drinks too many, and is approached by a local woman. She lays on the charm, and the man, inevitably, falls for it. His hands get a little too bold, and she accuses him of molestation, or outrage of modesty.

‘Two heavies come to her defense, threatening to call the police unless the businessman gives her hush money, which can be in the thousands of dollars. Usually the victims pays up because he’s drunk, confused, and don’t want to get ensnared in the law or receive the punishment: the rattan cane. ‘

200 people charges under Singapores ‘Outrage of Modesty’ laws
The warning comes after some 200 people, many of them foreigners, have been caught in a two year Singapore Government push to bring an end to improper behaviour in the ‘nanny’ state.

Among those facing caning along with Cowburn is a Japanese oil company manager Tange Tomio, 39, who is reported to have stroked a woman’s left thigh in a bar, and a Filipino accountant Samuel Minquan, 26, who allegedly touched a woman’s thigh on a train.

Strangely a local Singaporean who was found with a semi-naked 11-yr-old boy in a department store stairwell with a tube of lubricant has been charged with the same offence ‘Outrage of modesty’ instead of child abuse.

Singapore has publicised Section 354 of its Penal Code in a poster campaign.  Many are displayed in four levels of bars in the Orchard Towers mall – known locally as ‘The Four Floors of Whores’ –  where women offer their services in various stages of decency, and where some men remark that they are grabbed by Thai transvestites.

Such posters could perhaps be posted more prominently in Clarke and Boat Quays, the city’s showcase riverside entertainment areas, which have become magnets for prostitutes from throughout South East Asia, and as far away as West Africa and Russia.

In fact behind Boat Quay are now bars employing ‘hostesses’ from throughout the region, who are not being paid for their waitressing skills.

Tranvestites ‘make funny noises’
The local New Paper has drawn attention to the problem of ladyboys from Thailand plying their trade in Clarke Quay.  In a recent report the paper quoted a local bar employee Sidney Saayman complaining: ‘They sit on bridges and whistle at you.  They make funny noises like a cat being killed.’

But it was not one of the hundreds of ‘working girls’ or transvestites on which Cowburn, 34, allegedly made his move.  It was a Singaporean woman of Indian extraction.

But he did appear to become embroiled in an argument where threats were involved, possibly on both sides.

At the ‘China One Club’, where Cowburn allegedly committed his deed, staff seemed disappointed at the police involvement.

‘These measures are not good for business.  But a Chinese – Singaporean girl probably would not have had the same attitude,’ said a manager on duty during Cowburn’s arrest shortly after 2am on Sunday April 3rd.

‘He might have got a slap in the face or the girl might have given him a piece of her mind.  But the lady whose bottom was pinched was Singaporean-Indian and she was standing next to her husband.

‘She demanded an apology but the Briton refused. He said he had done nothing. The situation became heated. Somebody heard the word ‘bitch’ being used. None of our staff witnessed the actual incident.

‘I understand another foreigner, an Australian, did witness the act and offered to give evidence on her behalf. We did not call the police. The call was made from within the girl’s group.  It’s a storm in a tea cup. It should have been resolved on the spot, but this is how it went.’

The prosecution has already cost Cowburn (right) heavily. He has not been able to leave the country since the alleged offence early on Sunday April 3rd.  Since that time he has had to support himself in a city as expensive as any in Europe, and more expensive than many, and has thus, said his lawyer Thangavelu, had to stay in the Chinatown backpacker area of the city.

Part of the confusion is that foreigners often are not able to tell the difference between the friendly local crowd and the groups of even more friendly prostitutes.

This area of trendy bars and clubs has changed a lot since the days Nick Leeson, the man who brought down Barings Bank, frequented it, and was reported to have occasionally dropped his trousers for a ‘laugh’.

Visitors say that many prostitutes are not that obvious as they are more subtle about how they operate.

‘It’s very confusing,’ said Paul Clemencau,(name changed) 30,  from Montreal. ‘You can be chatting to a girl all night, buying her food and drinks.  She will look really smart, tastily dressed, not like the image of a prostitute at all and she can be perhaps more flirtatious than one expects. You could be touching each other quite a bit.
Left: Confusing signs at Clarke Quay

‘At the end of the night I do not know what to expect.  It could be a cheerful goodbye, or the girls will then suggest you pay $200 or $300 if you want to sleep with her.  It’s happened to me several times, even with local Singapore girls. It’s been difficult to find a relationship. All the girls seem to make themselves up to look sexy.

‘On the other hand, I guess, you can be having fun in the company of a woman and you make one false move and you are in for a lashing’.

He was speaking at the ‘Highlander Bar’ in Clarke Quay as two Filipina girls beckoned us over to join them.  Philippe, smiled, turned away and added: ‘Of course girls like that are more obvious. They are full on. But sometimes you really cannot tell.  Best thing is to do nothing unless you are absolutely sure.’

Clarke Quay sends out contradictory signals. Not all are in good taste.

Just yards from the China One bar at the ‘Crazy Elephant’, a flickering ticker tape digital sign broadcasts a series of crude, smutty, weak, old and exceedingly sexist jokes, many referring to women’s anatomy, and oral and gay sex. One joke opens: ‘How does Sinead O’Conor part her hair?’

Asians may like slapstick British comedy like repeats of old Benny Hill Shows but in Singapore anyone trying to emulate the late comedian and master of the double-entendre, could end up behind bars as quick as the musical theme covering one of Hill’s traditional high speed comic chases.

The penalties are not laughable.
The emphasis at Clarke Quay is to get everyone to drink as much as possible and when these incidents happen the man is invariably already drunk.  But women too are often drunk as the bars collaborate on ‘Women’s Night’ discounts.

Scene from the now dated Benny Hill Show -Thames Television
One bar called the ‘Clinic’ offers the novelty of getting drinkers to sit in wheelchairs are take their chosen drink from hospital saline drip bags, while real invalids on holiday are often wheeled by.

But if Austin Cowburn had fallen victim to any illusion created by Clarke Quay he was not letting on when I met him outside court this week.

‘Thank you so much for coming to see me.  But I really cannot say a thing because this matter is going through the courts.’

Asked if four months was not already a long time to get justice, Cowburn’s lawyer said: ‘No. The time scale is normal.’

Singapore’s history depends on who writes it.
Cowburn’s reply was not unexpected. To influence Singapore’s legal system any more than it is (It is based on British law but with no jury trials) could have dire consequences. The authorities do not suffer criticism lightly. What is deemed good for the people always prevails.
A current history of Singapore broadcast on the Discovery Channel can be taken with a pinch of salt in its benevolent view of how the state took control of the population. Its a home produced production.
Cowburn is due in court again on August 24 for another pre-trial hearing.

Meanwhile Singapore will continue to operate ‘common sense’ laws which some people consider draconian in their implementation.  People can also be fined for failing to flush a toilet, feeding birds,  selling chewing gum,  spitting, and even walking around their homes naked (if they have failed to close the curtains). Notices also warn people not to shake their hands dry after washing them in a public convenience. (It could make the floors slippery).
A popular T-shirt on sale reads: ‘I am a fined tourist’.  Nobody has yet produced one saying: ‘I came

to Singapore and all I got was forty lashes’.

The Singapore government has conducted its own study into people who breach the ‘OOM’ – Outrage of Modesty – regulations by assessing those arrested for the offence in local jails.

Left: Scary sign outside a Children’s Hospital.
The study found not surprisingly that most victims ‘tended to be young females’, and that ‘breasts and genetalia were the favourite targets’.

Furthermore offenders were’ less likely to commit their offences in the morning’.

‘While previous studies have indicated that non-violent sexual offenders tend to have a socially inhibited personality, unexpectedly comparisons revealed that OOM subjects had marginally higher scores on Factor H (boldness) compared to people arrested for theft offences”.
No surprises there.
And of course no press questioning why money is being wasted coming up with this.