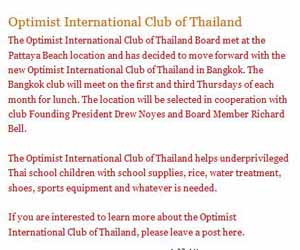 It is with deep regret that I have to announce  that the Optimist Club of Thailand, has deceased, kicked the bucket, gone to meet its maker, shuffled off its mortal coil, run down the curtain and joined the choir, and is pushing up the daisies..etc..

Formed in 2008 by well known, er, ‘dignitary’ Drew Noyes it has given away its last pair of shoes to needy kids. The club was heralded by Banglamuang Chief Mongol Thamakhittikhun as a boost to the city of Pattaya giving it honour and prestige. Unfortunately someone appears to have pocketed members fees.

The club will be sorely missed not least because it takes up a couple of lines in its founding president’s extensive 999 page CV. News of its demise was covered up six months for fear of upsetting local citizens.

Above: Member Mike of Optimist International Thailand on field trip

Below is how its historic inauguration was reported in the Pattaya Mail.

Its demise was quietly reported in a short one line statement from Optimist International in St. Louis, Missouri.

‘It’s charter was revoked for non payment of dues on March 31, 2011.  Drew Noyes was a member of the club at that time but was not an officer.’

There is no suggestion that Mr. Noyes was involved as he was clearly not President at the time. In fact he was not re-elected as President of either of the Optimists or the Pattaya City Expats Club. He claims he did not stand for re-election of either.
Honour and Prestige

The news comes as terrible blow to millions of kids in Thailand, but in honour of its lasting achievements and benefits to the cityof Pattaya, its website remains up on the internet and mourners can view the body here at the Optimist Club of Thailand.

Also affected is Wanrapa Boonsu, ( nicknamed Kung above left) from Buri Ram province and the mother of at least three of Noyes nine children. Kung, host of ‘MeetUniversityGirls.com’ (Facebook site here)and 18 other registered websites,  is being hailed as the best writing talent to have been discovered on the Eastern Seaboard since Jason ‘G’day’ Griffiths, another talent groomed at the ‘Pattaya Times’.  She has dedicated her latest work of fiction ‘Cybercrimes Investigation of Brit Begins with Backing of Powerful Police General‘ to the club’s memory.

Above left Kung with Drew Noyes – the subject of a star profile in  the Wilmington Morning Star, North Carolina, before arriving in Thailand.

Her blockbuster in the ‘Pattaya Times’ has been publish I understand to rave reviews. But unfortunately the newspaper’s comment button has been turned off.

Andrew Drummond has been reported by the ‘Pattaya Times’ to have ‘vacated his seedy 2000 baht apartment in Bangkok leaving hurriedly heading for the Malaysian border’.

* There is no suggestion whatsoever that any Thai members of Optimist International of Thailand were in any way responsible for its charter being withdrawn.

Footnote: Want to  re-invent yourself and become an outstanding citizen on the Eastern Seaboard of Thailand? Vacancies still open in the Knights of Rizal.

Review:
“A masterpiece. Wanrapa is the best author to come out of Pattaya since Jason Griffiths. Obviously taught by a master. Her clever weaving of truth and fiction is something to behold. She has us biting our nails and gripping our seats. I almost wet myself in anticipation.  I especially liked the dialogue with of the policeman in the cyber-crimes division. And the story’s hero Drew Noyes, comes across as a masterful 21st century man –
Vidal Gore, Sporting Life
A claim by the ‘Pattaya Times’ that police have ordered the closure of a website is spurious and in any case beyond the police remit. Mr.Noyes has asked CSD police to process his claims of libel in stories publish on this website. These alleged libels refer only to Drew Noyes. I not only invite but welcome investigation of my claims and am passing on ‘ a dossier’. Mr.Noyes has not yet provided specific evidence to indicate how he has been libelled.
Mr.Noyes is due to appear in Pattaya Court on October 3rd to face an accusation of, er, libel
How Drew Noyes Posed as Britain’s Honorary Consul –  click here !
Below from www.scandasia.com