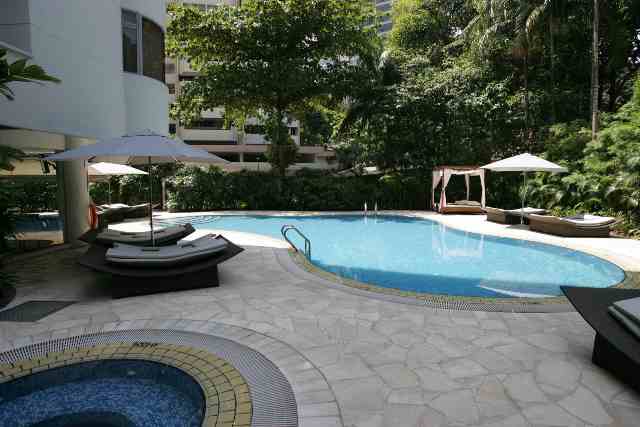 From ANDREW DRUMMOND
Singapore, August 5 2011
Evening Standard, Daily Mail, Metro, Sun, Independent,
Pictures: Andrew Chant
A three year old British girl has plunged to her death from a high rise block in Singapore. Today the parents were in a state of grief.
The 3-yr-old girl, who has not been named fell from on the 16TH floor apartment in Fraser Residence Orchard in the Mount Elizabeth-Cairnhill area of Singapore.

Police enquiries are continuing. So far police have not suggested any foul play.
The Chinese language newspaper Lianhe Wanbao reported that both parents were out but the baby girl was being looked after by a maid.
Both parents are reported to be British professionals in Singapore and had not yet returned home when the incident happened shortly after 6 pm on Monday, when the young girls body was found next to the apartment’s swimming pool.
The parents have since moved out of the apartment and have been receiving British Consular advice.
Reports that they had returned to Britain to be with their families could not be confirmed.

At the apartment today a woman resident, who asked not to be named said: ‘It was horrific. The baby girl fell into the pool area in front of residents of the apartment.  There were people by the pool at the time as it was the coolest part of the day when people go swimming.’
She said she did not know the couple in question, she said.
A spokesman for Fraser Hospitality said the company could not comment on the incident.
‘Police have not concluded their investigation.’
The apartments are in one of the most expensive areas of Singapore. Each unit is estimated to be worth around Ãƒâ€šÃ‚Â£300,000, most are rented, and the 20 storey block is mainly occupied by expatriates on international salaries.
Singapore Police confirmed that enquiries were ongoing and referred callers to the British High Commission.
Grieving Parents Of Three-year-old in condo for ‘Forbes 500’ Fly Home
From ANDREW DRUMMOND,
Singapore, August 6th 2011
Police in Singapore said today that a coroner’s inquest would be held into the death of a 3-yr-old British girl who fell from the 16th floor of a luxury apartment.
But they could not reveal the identity of the girl or her parents who rented the Ãƒâ€šÃ‚Â£5000 a month apartment in Singapore’s upmarket Cairnhill district prior to the conclusion of the investigation.
Yesterday (Saturday) the pool deck on to which the young toddler fell to her death was deserted. It is not clear whether she fell from a ‘mock’ balcony or exited through a sliding window. Again police declined to comment.
But said a Scandinavian resident. ‘The girl could not have fallen from a balcony as there are no balconies as such, at least not for going out on.
‘What look like balconies are just there to house the air-condition units.  Nobody goes out on them. The girl would have had to climb onto a unit to get over the wall.’
At Tanglin Police station Police Inspector Tan Hoe Peng said: ‘We are treating this as an unnatural death.  I can say nobody is in custody and I have been informed the family have returned to the UK.
‘The investigation is ongoing and I have to present my report to the coroner.  I cannot reveal the identity of the family before then.’
The three-year-old girl fell to her death shortly after 6 pm last Monday from the family apartment in the Fraser Residence Orchard.  The Inspector said he could not comment on reports that she was being looked after by a maid while her parents, both said to be professional expatriates in Singapore, had yet to return from work.
Fraser Hospitality operates high end serviced apartments worldwide and boasts   ’80 per cent of our residents come from Fortune 500 or Forbes Corporations’.
A spokesman said that the family wished to keep their privacy while they were grieving.