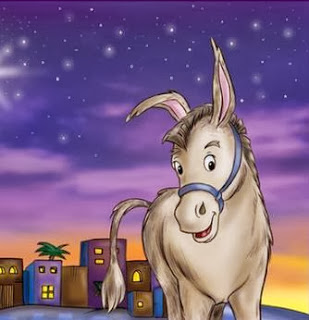 ‘Little donkey, little donkey
On the dusty road
Got to keep on plodding onward
With your precious load’ 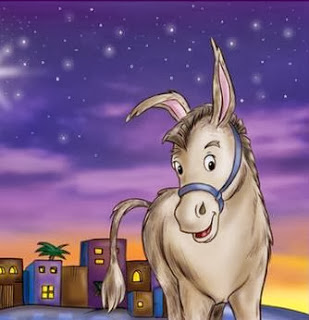 From inside the Karen State of Burma this sad tale of a, well a mule not a donkey, which died after falling into a ravine while carrying a precious load for the Free Burma Rangers.


I guess that happens a lot,  mules falling into ravines in Burma. I know one did with me sitting on it in the Shan States of Burma many years ago. Luckily it was the rainy season and we both thankfully fell into a pile of mud about 20 feet below. When we were both pulled out we left a cartoon imprint of our former predicament.

Anyway this donkey, er, mule – yes I have used a bit of poetic licence – was named Stephanie, and had been presented to the Free Burma Rangers by the parents of an English girl called Stephanie Lee.

Stephanie (the mule)  had carried lots of loads and lots of wounded people for the Free Burma Rangers, a Christian led group who go into Burma’s trouble areas.

It’s not major news of course, but as ‘Little Donkey’ was a Christmas song, and Christmas is approaching, I thought it would serve as a reminder that the Burmese Army ‘The Tatmadaw’ are still freely murdering and raping Kachins, Karens and Rohingya, while our businessmen beat a path to their door in Rangoon (Yangon) and Naypyidaw. 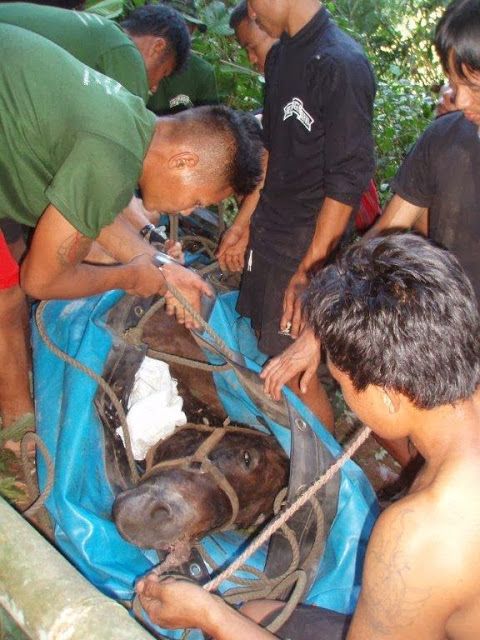 “Stephanie collapsed on the trail outside of our training camp-Tha U Wa camp- in Karen State. She was sick and fell off the narrow path down into a deep ravine. Stephanie was our most powerful mule and has carried many sick patents on her strong back as well as healthy people. 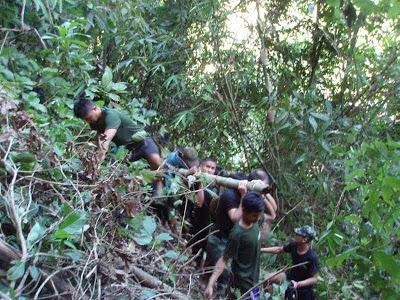 “My father who is in his eighties rode her when the mountains became steep on his trips in. She has carried thousands of pounds of relief supplies and is gentle in spirit and willing to do anything we ask of her. She had recently become sick and we were resting her and giving her medical treatment in our camp.

“Stephanie is named after a young girl from England who died in a motorcycle accident as she was helping Karenni refugees in Thailand. She was a friend of ours and her parents donated the funds to buy a mule and we named this mule Stephanie in honor of their daughter.

“Now Stephanie the mule had fallen a long way down the steep slope and was in real trouble. She was too sick and weak to stand back up and was hung up in vines with her feet in the air. Suu prayed for her and helped hold her head as we cut away the jungle to pass a rope under her.

“We then chopped out a shelf in the slope below, slid a deflated rubber canoe under her and lowered her down on to the boat. We then lashed her into the boat and slid a long piece of bamboo through the ropes while other rangers hacked out a new trail out of the side of the ravine.

“It took 20 of us working like ants to carry her out, some rangers sliding and falling while others took their place. We got her back to the camp clinic (JSMK).

“There we set her down and prayed for her. I asked Ray Kaw and Toh- both senior medics, to start a IV on her. We all prayed again, shaved a spot on Stephanie’s neck and held her still. Suu used a syringe filled with water and was able to get her to swallow some of it.

“We could not see or feel her veins as she was very dehydrated and sick and we prayed as Toh searched with the needle. There was flash of blood, – he got it. Toh did a perfect needle stick the first attempt and then the IV solution started to flow into her.

“We squeezed 3 I.V. bags into her and by the time we started the fourth she was showing more life and began to nibble the honey and crushed oats that Sahale and Suu brought her. Within an hour she was up on her knees eating from the bucket they had for her. A little while after that she stood up on wobbly legs. We hugged her and thanked God for her, the medics and all the rangers who carried her.

“Suu give Stephanie water as Ray Kaw and Toh treat her.We gave her antibiotics and arranged for her to stay at the camp but the next day as we started to walk out on the mission, she shakily tried to follow us out of the camp.

“We led her back to the camp where she was to rest under the care of our medics at the clinic and hopefully recover.


“Today while on the mission we got word that Stephanie did not make it. In spite of the best efforts of the medics back at the clinic, she died. Tonight the kids cried for Stephanie, as she was their favorite mule and carried them when they were infants. I remember riding with little Pete across rice fields, both of us on Stephanie with Pete riding in front of me. We are all sad at her loss. We do thank God for her life and all the ways she helped us and the IDPs and for the love she shared with us. We miss her very much”. 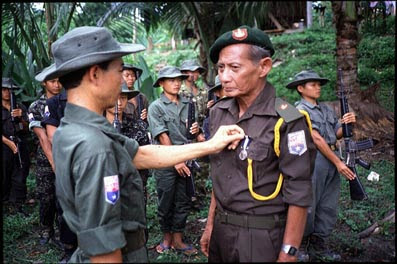 The Karen and Kachin were the background for Force 136 British forces behind enemy lines in Japanese held Burma during the Second World War. The British palmed them off after the war and still give them a rough deal to this day. Pretty much all the WW11 veterans I knew have died now, including Major Aaron Po Yin, a Karen Staff officer, whose DSM, I managed to get for him from the Ministry of Defence in London. The Major was formerly with the (British) Burma Navy before taking to the jungle when the ‘Japs’ arrived. He saved the lives of two British officers who were caught in an ambush. Notice British army style ‘present arms’ used by the KNLA.