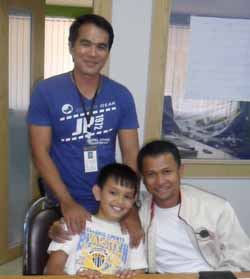 Police in the Thai capital Bangkok today promised ‘transparency’ in an investigation into a massive fraud committed on an Irish businessman on the holiday island of Phuket – a holiday destination which is increasingly being dubbed the ‘island of greed’ by local expatriates and tourists.

As a gang thought to be comprised of police, lawyers, and local ‘businessman’ tried to hang on to their newly acquired assets and cash,  officers from the Thai mainland who had been ordered to investigate were turned away by local police, who insisted they handle their own investigation.

But he and colleagues were forced to return to the mainland after a standoff in Chalong, Phuket.

On hearing the confusion Police Major General Prawut Thavornsiri  national spokesperson for the Royal Thai Police, said: ‘Those guilty must be brought to justice, whoever they are, even if they are police and lawyers.’

‘Robbed of seven houses’
At the centre of the fraud is Irish businessman Colin Vard, 57, a former Dublin President and Secretary General of the All Ireland Leo Club, and cousin of the singing Vard Sisters, who has been robbed of over US$1.5 million worth of properties in Chalong, Phuket.

His land title deeds, it is alleged, were taken by his housekeeper, who, with the assistance of lawyers, police, and influential businessmen, transferred them from his company name, and sold them off at bargain prices, in an at least one case to the relative of a senior policeman.
‘Children thrown into well and padlocked in’
The housekeeper, Nittaya Sukumpa, 37, is believed to have profited to the tune of less than 15 per cent and is the only person so far to be held in custody.   Her elder sister was released on bail after officers from the mainland left on other duties.

During the later stages of the fraud, Colin Vard’s children,  Jessie, 12, and Daire, 9, were allegedly padlocked in a well at the family home, while their father was in Ireland to attend a wedding.

Two senior policemen from Phuket, one based in the Chalong area, and one a senior provincial officer, were named as suspects in the conspiracy by investigating officers. It is the sister of one who was reported to have acquired one of Vard’s houses.
A triumph: Police track down Irish boy to Udorn and return him to father
Said Major General Prawut: ‘I was personally involved in this case . I met Mr. Vard and I called  Police General Pisan Jumvirod in Surat Thani to take charge.  A team was set up and we successfully found Mr. Vard’s son who had been taken up country, and returned him to his father.

‘The housekeeper was arrested as was her older sister and the last I heard this matter was going through the courts and Mr.Vard would get his houses back.  It has been stated that police and lawyers were involved.  I am seeking clarification of what has happened. I will keep you informed.’

Meanwhile Mr.Vard,  whose father was Cecil Vard, who drove for Jaguar in several Monte Carlo rallies, and was also the founder of the Dublin Lions Club, was last night still in hiding with his children.

‘I’m afraid with two different sets of police now up against each other this makes matters more dangerous. Police in Surat Thani have advised me to move every three days, and change my phone regularly.  I am told it is not safe to go back to Phuket because I am of course the major witness.

‘And actually the housekeeper is in danger too, whether she is in jail or outside, because she got very little of the real money and the gang would not want her to testify.’

The reputation of the island of Phuket has been massively tarnished over the last year with widespread allegations of scams and rip-offs on everything from hiring jet skis  – a damaged one can cost the tourist up to $5000 ,and police have been involved in the extortions – to simply catching a cab . Tourists have reported they have been thrown  of taxis out on the way to the airport after they refuse to pay more than the agreed price.

Running out of time

Last week Dirk Naumann, the German Honorary Consul on the island in an unusual public outburst, said on a local news site Phuketwan:  ”Too many people on Phuket only seem to care about money.  It really is time for those who can see what is happening on Phuket to speak out, to show that they want Phuket to be a better place, a place that their children and grandchildren can continue to enjoy.

”I believe Phuket is running out of time. Unless changes come soon, it will be too late for this beautiful island.”

Link:Children Padlocked in Well as Irish father is robbed of his holiday homes

COMMENT
Lets hope there is a happy ending to this story. Its encouraging when I come across good Thai police and good Thai lawyers who actually care when something really bad happens to a foreigner. They are the ones initially sounding the alarm bells here not me. This story shows again that no matter how clear cut a case, if the watchers are involved somebody has to watch the watchers 24/7.  So I wish the best of luck  to Surat Thani Police Region 8 HQ. Let’s hope that they can show that they actually run all of the Region and that Phuket has not become a private thiefdom.  Is it too much to hope the the real culprits will see some jail time and Mr.Vard will get his property back?

Is it ever safe to buy property in Thailand? The law stipulates, with few exceptions, that foreigners cannot buy land in Thailand. But still real estate agents are pushing land at foreigners everywhere and giving a variety of options in the form of leases, buying though companies etc.  In most cases of fraud I have dealt with its foreigners, with Thai lawyers,  cheating foreigners. But there are also many fully local cases. Here’s a benchmark case, that any prospective purchaser should take heed of, involving a man who thought he had done everything by the book.

YES FOREIGNERS CAN OWN PROPERTY IN THAILAND