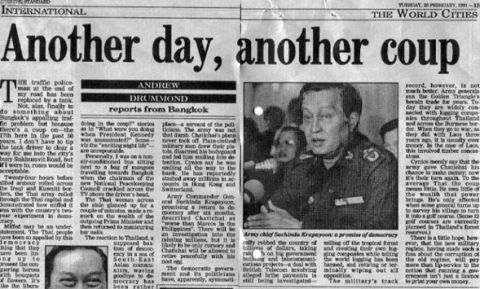 Evening Standard February 26 1991
This is a story from the World Cities column in the Evening Standard in 1991.
This has been included because it seems to say ‘the more things change the more they stay the same’
When the tanks rolled in again in 2006 the people said it with
flowers. The ousted Prime Minister Chatichai however was allowed to keep
the cash he made while in office.
Tanks rolled in again on September 18 2006

Evening Standard                                                                      International
ANOTHER DAY. ANOTHER COUP
Andrew Drummond reports from Bangkok
THE traffic policeman at the end of my road has heen replaced hy a tank.
Not, alas, finally to do something about Bangkok’s appalling traffic
problem but because there’s a coup on ‘the 17th here in the past 50
years.
I don’t have to tip the tank driver to clear a way for me into the
city’s busy Sukhumvit Road, but if I were to, roses would be acceptable.
Twenty-four hours before allied armour rolled across the Iraqi and
Kuwaiti borders, the Thai army rolled through the Thai capital and
demonstrated how miffed it was with the country’s two-year experiment in
democracy.
Miffed may be an understatement. The Thai people have been so
appalled by this democracy thing that they have been lining up to
present the conquering heroes with bouquets of flowers. It’s like the
liberation of Paris, but Thai-style.
Showing extreme emotion is not considered de rigueur so they approach
the soldiers, wai (bow with hands clasped together in front of them)
and then proffer their tokens of gratitude.
The United States – democracy’s stormtroopers – has responded to the
coup by cutting off all economic and military aid to Thailand.
The British Embassy has warned British nationals and tourists to be
‘on the alert” although for what I don’t know ‘ and watch the news
broadcasts. Otherwise, life continues as normal.
The event has prompted a number of ‘What were you doing in the coup?’
stories, as in ‘What were you doing when President Kennedy was
assassinated?’
Personally, I was on a non-airconditioned bus sitting next to a bag
of mangoes travelling towards Bangkok when the chairman of the new
National Peacekeeping Council crackled across the TV above the driver’s
head.
The Thai woman across the aisle glanced up for a couple of minutes,
made a remark on the wealth of the outgoing Prime Minister and then
returned to manicuring her nails.
The reaction to Thailand, a supposed bastion of democracy in a sea of
South-East Asian communism, waving goodbye to democracy has been rather
muted, not so much because a war elsewhere has taken the limelight, but
because of the general feeling that things can only get better.
The most worrying aspect of all is the National Peacekeeping Council.
It translates more closely in English as the National Law and Order
Council. It has a familiar ring.
Just across the border in Burma is the State Law and Order
Restoration Committee (SLORC) with which the Thai military has concluded
some lucrative business deals. For this, most people have read State
Lock up your enemies, Rape, Torture, Pillage Committee.
Thailand’s outgoing Prime Minister, Chatichai Choonhavan, was
arrested as he was travelling to see the King to swear in his new Deputy
Prune Minister who supposedly was going to put the army in its proper
place’ as a servant of the politicians.
The army was not that dumb. Chatichai’s plane never took off.
Plain-clothed military men drew their pistols, disarmed his bodyguard
and led him smiling into detention.
Cynics say he was smiling all the way to the bank. He has reportedly
stashed away millions in accounts in Hong Kong and Switzerland.
Actually I have found Chatitchai quite an amiable rogue, although perhaps not very politically correct in western eyes.
When he was once asked wasn’t it a national disgrace that the country
was known as a destination for sex tourists he replied: ‘Well , Thai
girls are beautiful are they not?’
However Army Commander General Suchinda Krapayoon, promising a return
to democracy after six months, described Chatichai as ‘worse than
Marcos in the Philippines’.
There will be an investigation into the missing millions, but it is
likely to be only cursory and Chatichai will be allowed to retire
peacefully with his nest egg.
The democratic governments and its politicians have apparently
systematically robbed the country of billions of dollars, taking
rake-offs on big government building and telecommunications projects ‘ a
deal with British Telecom involving alleged bribe payments is still
being investigated ‘ selling off the tropical forest and creating their
own logging companies while telling the world logging has been banned,
and retiring or terminally wiping out all opposition.
The military’s track record, however,is not much better. Army
generals ran the Golden Triangle’s heroin trade for years. Today they
are widely connected with logging companies throughout Thailand and
across the Burmese border.
When they go to war, as they did with Laos three years ago, it is
usually over money. In the case of Laos, this involved timber
concessions.
Cynics merely say that the army gave Chatichai his chance to make
money; now it’s their turn again. To the average Thai the coup means
little.
He sees little of the wealth that power brings. He’s only affected
when some general turns up to survey his village to turn it into a golf
course. (Some 22 golf courses are currently planned in Thailand’s forest
reserves)
There is a little hope, however, that the new military regime, having
made such a fuss about the corruption of the old regime, will pay more
than lip service to the notion that running a government isn’t just a
licence to print your own money.
Footnote: Chatichai was allowed to keep his assets.