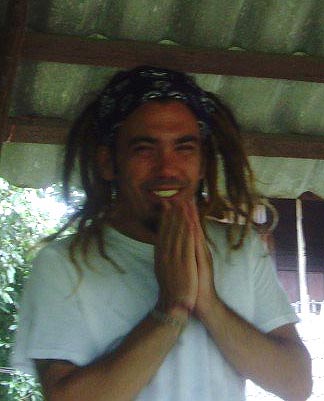 Four Years On Policeman Finally Puts In Self Defence Claim

Police Sergeant Uthai Dechachiwat has pleaded not guilty to the murder of Canadian tourist Leo Del Pinto in the village of Pai, Mae Hong Son, province in January 2008.

At Chiang Mai court this week Sergeant Dechachiwat admitted that he was the same person who had been convicted in another murder case – the murder of Wanta Dechachiwat, his 18-yr-old wife of two weeks, by clubbing her to death with a piece of wood.

He said he was not guilty of murder in the case of backpacker Leo.

The court agreed to a special hearing of the case in Pai in July and three consecutive days in Chiang Mai at the request of the Canadian Embassy.  Uthai (below) said that he would be calling police two witnesses among five witnesses in his defence.

Prosecutor Poonbsil Intachai is calling eleven witnesses.  Carly Reisig, a fellow Canadian who was shot at the same time but survived has already given evidence at the court in Mae Hong Son.  Two Thai witnesses have had police protection, following an investigation by the Thai National Human Rights Committee.

Among the witnesses will two expert witnesses, Ms. Duangjai Jipipob to report on alcohol levels and Police Colonel Boonrak Gowsombat to report on gunpowder residue.

The murder of Leo Del Pinto is controversial not least because of the reported attempts by Thai police to protect their own. The Thai National Human Rights Commission uncovered intimidation of witnesses by the head of police in Pai who were encouraged to support the view that Sergeant Dechachiwat was acting in self defence.

Forensic reports however showed that Leo was lower than the level of the gun and appeared to be falling down when he was shot.

Leo’s friend Carly Reising (left) was also shot in her side, but recovered and has now returned to Canada.

In Calgary, Canada, Leo’s father Ernie campaigned for justice for his son, and even the local buses carried poster adverts calling for Thai justice.