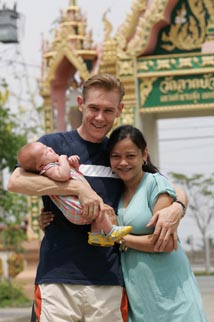 Bangkok
Sunday April 20th 2008
A Briton, who fled the Philippines with his girlfriend and baby daughter to avoid being jailed on adultery charges, said today (Sunday) that he would undergo DNA tests in Bangkok to prove that he was the baby’s father.
And he begged British officials to allow him to go home with his new family to start a new life.

David Scott, 36, from Swindon, a Ministry of Defence sub-contractor specialising in armour, fled
Manila after being told by the British Embassy that his daughter – Janina- who was born while he was on the run from authorities was not legally his.

Officials said Janina, now three months old, who Mr. Scott brought to Bangkok with his girlfriend Cynthia Delfino, was under

Philippines law, the daughter of Cynthia’s husband Noriel, from whom she had been separated for three years. Divorce is illegal in the Philippines.

The couple met on an internet Facebook style site while Cynthia Delfino, 28,  was working as a supervisor at a hotel in

Abu Dhabi. She initiated proceedings to annul her marriage and the husband agreed.  But he stopped proceedings when he found the couple’s picture on the internet.
Delfino then angrily brought adultery charges against the couple who were arrested on December 30 last year and imprisoned.  They faced seven years in jail for adultery and Noriel Delfino could have claimed the baby.
Having been bailed and on the run  Noriel who took a second adultery charge out so that their bail would be withdrawn.  The couple had to live in derelict houses and even a banana plantation for fear of re-arrest.
The couple claimed they had to pay bribes for bail totalling Ãƒâ€šÃ‚Â£6000 for documents to get out of the

country and to Philippines Immigration officials.
‘At the moment we are stranded in Asia. I cannot leave my sweetheart and baby behind. I am pleading with the British government to allow us all to come home.
‘We are hoping someone back home has a heart.’
The couple have recruited the support of their local M.P. Anne Snelgrove (Swindon South). They hope their application will succeed outside the laws of the Philippines.
Link: Evening Advertiser