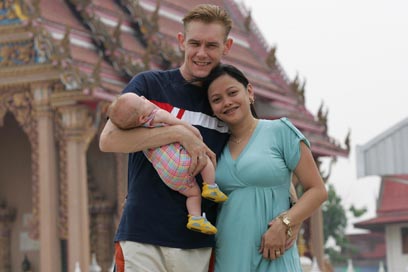 From Andrew Drummond, Bangkok
A British father, who faces seven years jail for adultery, has successfully fled the Philippines with his new born baby daughter to save her being taken from him by local officials.
David Scott, 36,  who spent the New Year locked up in Manila with his Filipina girlfriend Cynthia Delfino after being arrested at gunpoint – was last night safe in with his new family Bangkok.

‘He’s my Superman,’ his girlfriend and mother of his baby, Cynthia Delfino: ‘It’s so good to be free at last, and that’s down to him, but our future is still uncertain.  I have to throw myself on the mercy of the British government to be with our baby’ .
Said David Scott. ‘Now I can fight without my hands tied to bring my daughter home.’
The couple escaped with their baby Janina, after a three month ordeal during which they said they were locked up in a squalid cell smeared with blood and human excreta forced to live in the jungle and derelict houses forever in fear of re-arrest and blackmailed by greedy officials seeking to cash in on their dilemma.
For David Scott, he said, it was a race against time to stop the authorities in the Philippines taking his child away from him. For under Philippines law the baby was not legally his.
Legally, although he was the natural father, little Janina Scott, belonged to Noriel Delfino, Cynthia’s husband who had agreed to an annulment, but changed his mind when he saw David was a foreigner and sent in a bill for Ãƒâ€šÃ‚Â£7000 for ‘loss of face’ instead.
‘I was not going to let him or the authorities take away my daughter – over my dead body!’ said David in Bangkok.
When David flew in to the Philippines late last year to prepare for his baby’s birth he was ‘on top of the world’.  The husband, who had been separated from Cynthia for three years, had agreed to an annulment (Cynthia and David were paying)  and David was looking forward to becoming a dad.
Their world was shattered on December 30th when armed police, immigration officials and officers of the National Bureau of Investigation stormed their house in Caloocan, north of the capital Manila, accompanied by the husband.
Said David, 35, a technician working on sub contracts for armour the Ministry of Defence: ‘ Our house was surrounded and all the police had drawn weapons on us. I have never seen so many guns. You would have thought we were terrorists.
‘When we were taken to the police station a policeman pointed to one of the police vehicles, which was full of bullet holes, and said to me with a laugh: ‘I took the guy who did this round to the back of the car and put a bullet in his head’.
‘They charged us and put us in a large cell with scores of others.  Then Cynthia negotiated a cell of our own. We had to pay an extra Ãƒâ€šÃ‚Â£10 per night to be alone together.
‘The wall of our cell was covered with blood and human excreta. It was filthy and rats would come and go as they pleased.  Three days later were eventually offered bail of about Ãƒâ€šÃ‚Â£150, but we had to pay over Ãƒâ€šÃ‚Â£1000 under the table just to get it.
‘I could see this case was not about right or wrong. It was about who could make money out of it.

‘As soon as we got out of sight we just ran. We were in contact with the Embassy by phone. We lived rough in a derelict house, with friends, and some nights in a banana plantation, cooking over a wood fire. We were terrified of being re-arrested.
‘We knew the husband did not care about his divorce or Cynthia, he just wanted the money. He wanted to get us back into jail because there we would be vulnerable and probably be happy to pay to get out.
‘But the fact is my money had run out.  Everywhere we turned bribes were demanded and I was not going to be blackmailed any more. I felt like an escaped prisoner of war. I could not go out in public because I might be recognised.’
David’s call to the Embassy confirmed just how much trouble they were in. Officials told him that even though he was the baby’s natural father, legally the Embassy had to abide by the law that said the child belonged to Delfino.
The response was followed by the usual Foreign Office comment in such cases: ‘We cannot interfere with the law of our host country.’
But after taking up the case with his M.P. Anne Snelgrove (Swindon South) the Embassy did a u-turn saying that if he could produce a birth certificate, and provide DNA tests witnessed by Embassy officials the child could obtain British citizenship. But process could take up to eight months!

But with only days left before his re-arrest David, he had no choice but to flee.  Together with Cynthia and two month old Janina, born in a private clinic while on the run, he bribed Philippine officials to get him onto a Philippines Airlines flight to

Bangkok.
Said Cynthia:  ‘We did not get out a day to soon. On the day we left we heard at the airport that police had issued another warrant for our arrest because my husband had taken a second case of adultery against us both in another court.
But before we left I had been summonsed to the family court to give evidence in my annulment case. But the judge did not even turn up.
‘But my husband and his family were there and my lawyer and I were tailed by their private detectives. They followed us everywhere and it was difficult to shake them off.
‘Eventually after two hours my lawyer called my husbands lawyer and told him to call off the detectives, because no matter how long it took we would never show them where we lived.

‘It’s good to be out and safe with our baby. But this means I cannot go back to the Philippines. They will not give me bail again and I will be jailed for adultery.

‘The only crime I am guilty of is sleeping with the man I love. My husband and I had been separated for a long time. It was he that sent me to work as a supervisor at a hotel in Abu Dhabi and told me to send money home. All he did was sit at home and wait for the money.’

Tomorrow Monday the couple will go to the Police Hospital in

Bangkok for DNA tests to prove without any doubt that David is the father.

Philippines. But the couple are taking no chances.
David met Cynthia, a psychology graduate, on and internet Facebook style site while she was working as a supervisor at the Emirates Palace Hotel in Abu Dhabi.
He knew she was married and separated but their relationship developed and in April last year she became pregnant during a holiday together in the Philippines.  She initiated annulment proceedings against her husband, Noriel Delfino, who initially agreed.
Scott said he had to bribe government officials Ãƒâ€šÃ‚Â£2,500 to provide a genuine birth certificate and Ãƒâ€šÃ‚Â£2,100 for a passport from his baby.
‘I am free and penniless and have been supported by my mum and some very good friends.’
The real costs since December had been Ãƒâ€šÃ‚Â£13,000 which included paying bribes of over Ãƒâ€šÃ‚Â£1000 under the table for bail of only Ãƒâ€šÃ‚Â£150, payment to police to be able to sleep together in the same infested cell, Ãƒâ€šÃ‚Â£4000 for passports and documentation,  Ãƒâ€šÃ‚Â£500 in bribes to get out of the country, plus Ãƒâ€šÃ‚Â£4000 in legal fees.

‘Even though we had paid Immigration officials, when I left the Passport Officer said that he believed my entry visa to the
Philippines was forged.   When his colleague pointed out that the signature was actually his he just mumbled and took my last Ãƒâ€šÃ‚Â£25 anyway.’
The couple have received widespread support in the Catholic Philippines, where divorce is illegal and annulment, the only alternative, is seen as a device for the rich only. In all annulments one of the parties has to admit he or she is ‘psychologically incapable’.

The Manila Standard newspaper described their case as ‘a sad commentary on an antiquated Philippine adultery law, on corrupt police officials, and on the ordeals of David Scott’s love – a woman who was eight months pregnant but had to spend several days in a putrid and cramped jail cell.’

Philippines Human Rights lawyer Katrina Legarda said: ‘I  have tried for 20 years to introduce a sensible divorce law, but every time I do I get condemned as a friend of the devil in pulpits all over the country.’

In Swindon David’s mother Anne Scott, 60, said: ‘I’m so glad they are safe now from bullying officials.  I just want to see my grand-daughter, son, and Cynthia as soon as possible. I wish David’s father were still alive for this happy event. And I hope the Foreign Office will understand they are a genuine case.

‘Before this David had hardly missed a day’s work in his life.’
Added David ‘Mum has seen our baby on an internet web cam several times. She cries whenever she sees Janina.