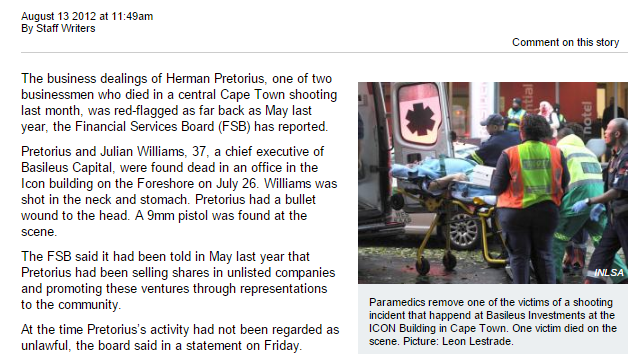 BUT ANALYSTS DID NOT PREDICT MURDER, SUICIDE AND OTHER ‘RUMOURS’

MGMB Asset Management  regarded by many as the cream of the financial
companies has issued a statement in the light of the exposure on the website Offshore Alert that an associated company was described as possibly ‘the biggest offshore criminal financial enterprises
in history’.

Paul Gambles head of MBMG described the allegations as ‘rumours’
insisting no MBMG clients would be affected. Offshore Alert seems to more than suggest that some US$13 billion may be going up in smoke – and much already has.
The whole scenario is linked to a murder and suicide in Capetown and those events are directly linked to a ‘former’ consultant to MBMG a Mr. Jacobus Kellerman. Its all tied in with the group Belvedere Asset Management, registered in Mauritius.
The MBMG statement issued by Paul Gambles read:

‘Regarding the Offshore Alert article on Belvedere, no MBMG
Group entities, their employees or any clients are in any way exposed as a
result of either the rumours contained in the article or the  investigations detailed by the MFSC in the
communiqué it has issued in response.

In addition, the Monetary Authority of Singapore stipulated
last year as part of its licensing requirement severing ties with
Mauritius.   This in no way reflects on
Mauritius, its regulators, any of the parties there that we’ve worked with at
various times or any of the current rumours or investigations.

service with the highest level of regulation and
transparency from its bases in Thailand and Singapore.

Regarding Cobus Kellerman, in his previous roles Mr.
Kellerman was one of several hundred analysts who each contributed a handful of
pieces of analysis and advice to MBMG Asset Management but not, as far as I’m
aware since the strategic review in 2012.”

Indeed but those dates do not work for me.
Both Gambles and his deputy Graham  Macdonald, O.B.E., former Chairman of the
British Chamber of Commerce, heavily promoted Belvedere Asset Management and
associated companies headed by Irishman David Cosgrove and South African
Jacobus Kellerman not only in their literature but also in stories disseminated
to local newspapers in Asia. (Incidentally having got his O.B.E Macdonald then left to become President of the South African Chamber of Commerce in Thailand).
Kellerman appears to have been a guest writer on the MBMG website but it appears there has been a bit of housekeeping.
In March 2012 MBMG put out the following statement:

“This is just as impressive as the ‘aggressive’
performance given the extremely tight risk mandate in the ‘cautious’ investment
sector,” said Gambles.

Kellerman
MGMB was for a while at least registered to the offices of
Belvedere Asset Management in Mauritius.

It is possible Gamble may be playing down MBMG’s
relationship with both Belvedere and Kellerman, giving the glowing reports they
have given in print on both, and also given that in May 2013 Belvedere was
sponsoring a charity golf tournament in Thailand where both Macdonald and
Gamble turned up to dish out the prizes and that was not the only event.  In fact the association between them seems to
have dated back to at least 2004.
Taking this into account I am taking Gamble’s statement: “Mr.
Kellerman was one of several hundred analysts who each contributed a handful of
pieces of analysis and advice to MBMG Asset Management” with a very large pinch
of salt. But then of course it is only IFA speak.
Anyway it is just as well MBGM cut the knot. A murder and
suicide in Africa and links to Kellerman must have negated endless press
releases put out on paid for ‘wire services’.
MBMG I should point out did not put clients in the disastrous LMMPF or Axoim Fund – two collapses also forecast by ‘Offshore Alert’.
But they have been a bit injudicious about the staff they have employed.
LINKS: Foreign Financial Men in Thailand – Exposed – A cover-up!
Fired! MBMG analyst goes after being economical with the truth