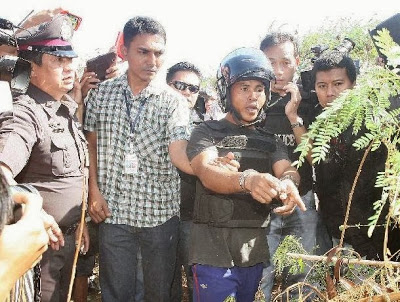 ROADIE AND SECURITY MAN FOR TRAVELLING MUSICIANS WAS SAFE ONLY BEHIND BARS.

A mystery man with no ID has confessed not only to the brutal rape and murder of a six-year-old girl in Bangkok but now also FOUR other child murders.

And he claimed he raped
five others but did not kill them.

Police in the Thai capital are trying to check out the man’s extraordinary claims after he confessed to the other crimes on his arrest in the north east Thai province of Nong Khai.

The only break in his rape and killing spree came, he said, when he was jailed for three years for abducting a child under 15 – but he was released last Ausgust.

But the leader of the Thai folk group, ‘Mai Thai Hui Jai Silp’, for which he worked as a ‘roadie’ has now made a public statement saying the man under arrest who goes by the name Nui is no ‘scape goat’.

“He wore one of our T-shirts with the group’s logo on it. He is the same man as the one caught on the CCTV,” said the group’s lead linger Ekluck.

And Sudarat Sereewat, Secretary General of Thailand’s Coalition to Fight Against Child Exploitation, said:”In the local context we have to take what the man is saying as being true. Ten other children could well have been raped and murdered”.

Thai Police have sought details of the group’s recent tours and it is believed that the group has been to most provinces of Thailand.

Since the arrest of the man, known only as Nui because he was orphaned at birth, the parents of two young girls have reported their daughters missing to the police murder headquarters in Bang Na, Bangkok.

The chilling confessions may seem far-fetched. It’s possible he could be a serial confessor, but his claims are being taken very seriously.

Missing person reports while not uncommon in Thailand and police, claiming lack of resources, often do little more than log the cases, even in the cases of young children.

Thai Police however say in the last year they have found over 1000 missing children and returned them to their parents.

Very often they are used by ‘Fagin’ type gangs who send them out to beg in tourist areas.
Paraded at a press conference last night and in the light of his confession Nui’s words had a hollow ring.

“Apologies to the parents,” he said. ”I didn’t mean to do what I did”.

Nui had spotted the girl nicknamed Cartoon, real name Attitaya Pechdon in the father’s pick-up truck where he had left her on December 6th while attending the group’s concert in a suburb of Bangkok.

“He gave her some sweets and told her to come with him and he would buy her more. He then took the girl to a bush area on a deserted plot and attempted to rape her.

“She resisted so he choked her. Then he raped her.”

The girls’s mother Tukta Sawangsri reported the disappearance of Cartoon at 3.35 am on December 7th after the father Sayan Pechdon admitted he had lost her.

Police later searched a forest area near the Skytrain
station and deep inside the found a hammock occupied by a Cambodian vagrant. 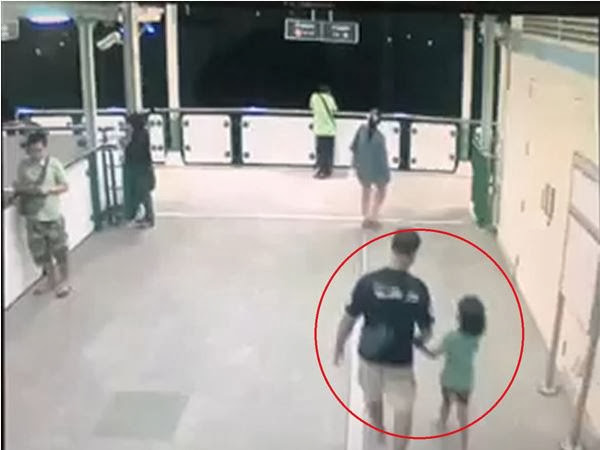 Under the hammock they found Kartoon’s pants and also inside
a pocket they found a chocolate wrapper from chocolate her father had bought
her.

“The Cambodian man could not give clear any clear information.  However his figure did not match the man seen
on the CCTV with the child.

“A Por Tek Tung Team (Medical team) helped assign a number
of staff to help search the area and went deeper inside the forest and had to
go through the barbed wire.  They found a
skull of a child at the edge of a ditch, and no other pieces of any organs in
the area nearby.

“The Forensic doctor came to inspect the area of incident,
said that from just a look at that skull, it should be the skull of a 6-8 year
old girl.

“The doctor guessed that there might be animal came to bite
and eat it as there was no fresh nor skin on it; the color was still pink and
once the doctor put it up—seeing the worms—which show that the person died not
long time ago”.