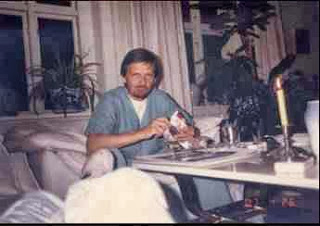 A SALUTE TO NIELS COLOV-

The leader of Pattaya city’s Police Foreign Volunteers has broken his silence about his past to give an exclusive interview to the advertising rag ‘Pattaya Trader’.


Asked whether he is a saint or devil in disguise he replied:

“All the negatives come down to one man and they are not true. I have a clean record. We have 60,000 friends on Facebook.  I am a positive person. I focus on the positive not the negative.”

No prizes for guessing who this man might be.

Unfortunately the interviewer, Steve Mascari, whose story was spread in big print across two pages, did not appear to ask the former Copenhagen gangster if he had been to jail, or if he had been convicted of pimping, coercion, vandalism etc…because although it is true that he has a clean record, that is because (1) Under Danish rehabilitation law his criminal record has now been purged * and (2) He has indeed been a saint in Pattaya or police have never acted on complaints about him.

Then again the Pattaya Trader does have a full page advertisment for the Pattaya People Media Group on the next page!

Colov extols the virtues of Pattaya in the interview: ‘It’s the best city on earth’ he says adding later ‘I would like to see Pattaya as the ‘Cannes’ of Asia.

Recently Niels Colov showed Crime Suppression Division a statement from the Royal Danish Embassy that he had a clean record. And it would be fair to say that it is 30 years since he worked in the red light district in Vesterbro, Copenhagen, where his offences had been committed.

What however is questionable is whether his record was purged when he arrived in Thailand in the first place. Technically foreigners are obliged to tell Immigration whether they have been in jail for any serious offences. No foreigner in his right mind is going to do that.

What is seriously bugging Mr Colov at the moment is that his criminal record is actually up on the internet and has been there long before we revealed it on this site.

His lawyer admitted it when he took a libel action against the Jyllands Posten newspaper, which stated that he was under examination for drugs trafficking. His case is used for journalist students studying Danish libel laws.

It was a libel case that he won. Journalist students need to know where not to go wrong.

Indeed the topsy turvy world of libel and the rehabilitation laws of various countries is something of a minefield. Britain for instance has a ‘Paedophile Register’.

This makes life very difficult for convicted child abusers in terms of having to notify the authorities where ever they stay and which can prevent them travelling abroad. 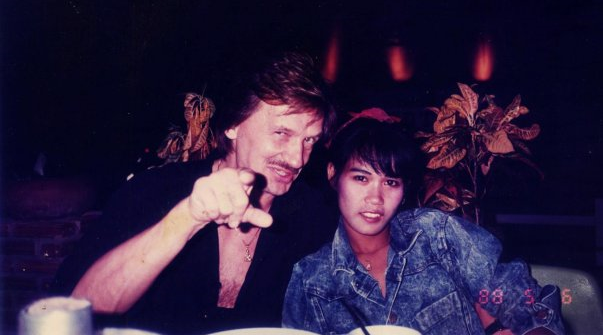 But bank robbers, murderers, pimps etc, one they have served their sentence can do as they wish. Under Danish Law the Thai Police have no right to know about Colov’s previous convictions. 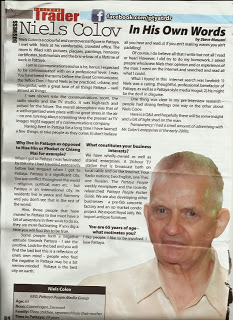 The newspaper was unwise to run a story from ‘police sources’ who of course were not going to back their claims if it came to the crunch. But it took a gamble.

And just because Mr Colov has associated with drugs traffickers does not mean he is one. One long time friend Lonne Fristrup Jensen was a career drugs trafficker, who was arrested in Pattaya and deported to Copenhagen on a charge of arson (commissioning someone to burn down a rivals home).

There was insufficient or indeed perhaps no evidence to link Mr Colov to heroin.

So at the moment we must forget his days in the Copenhagen underworld and conclude that he is nearer a ‘saint’ to a ‘sinner’.

This saintly figure is however also economical with the truth.

He claims that over 100,000 read his Pattaya People every week. Statistics provided by Alexa do not support this claim. 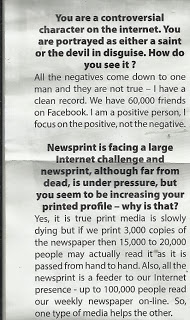 The Pattaya People is listed as number 3206 in Thailand (Pattaya Mail is 937) with a bounce rate of 60.60%. The lower the bounce rate the more time viewers spend on the site.

Colov also claimed that some 15,000 to 20,000 people would read some 3000 printed copies of the Pattaya People. Granted that lots of these newspaper are left around bars and are picked up, but the newspaper industry in general would be delighted if more than 3 people read each copy of a newspaper. And once picked up I am guessing that the Pattaya People is more often than not put down quite quickly.

“I do media not to make money, but to make a difference,” he said.

He does not state what difference, but let’s assume it’s for the better.”

These are noble thoughts but then one has to point out that the Pattaya People also serves him to point people to his numerous businesses which like Drew Noyes of the Pattaya Times include legal advice, property, and insurance services.

Mr Colov has spent a lot of time on damage limitation. He for instance had the Mangus Evans Facebook page, which showed a picture of him with Lonne, with the caption ‘Been to Jail’, removed.

He turned up at a nonsensical libel case as a witness for Drew Noyes to say Andrew Drummond ‘wrote bad things about Thailand.’ The case was dismissed.

Ironically Drew Noyes former publisher of the now defunct Pattaya Times was the person who started putting out locally stories of Colov’s past. They have since declared an uneasy truth and while they can be seen together a lot Colov will not take part in Noyes’ hedonistic games.

They are an unlikely pair – perhaps united in joint suffering – or because if they were to continue fighting all they would do is lose money, while the public revelled in their antics. 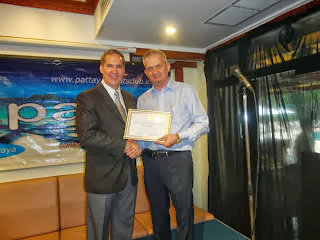 Not only has Mr Colov tried to hide his past but he spends collecting medals, certificates and awards in a culture where these are given very liberally.

He was the principal mover in getting local dignitaries including the Mayor and Police chiefs to become ‘Knights of Rizal’.

And he has was a major player in the dishing out of fake UNESCO crosses to Thais and foreigners at a hotel in Bangkok.

The recipients of these were an unlikely bunch and UNESCO denied anything to do with the shambolic affair. There is no such things as a UNESCO cross. 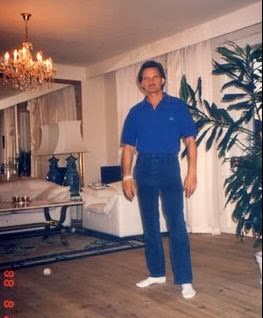 This of course leads one to ask what this former Copenhagen pimp has contributed towards science, education and culture.

Niels Colov says he like competition. I believe he does. It’s then that he seems to drop his Buddhist and vegetarian principals and becomes a much more commercial predator.

But as the interviewer states Niels Colov has also helped a lot of people in Pattaya who will swear loyalty to this colourful character and as he has announced his is resigning later this year that perhaps would a preferred ending where he could go out to pasture with his grand children on his knee. But will he?

Today he certainly cuts a much different figure to the man on the right – once a familiar site around Denmarks’s former red light district close to Copenhagen’s central railway station. 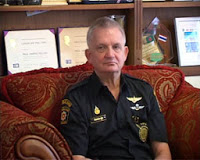 And from Copenhagen underworld figure to chief of the Pattaya Police Foreign Volunteers who cannot but admire his remarkable transition from sinner to saint.

Whether his Pattaya Media group is making a difference – that’s anybody’s guess.

But for sheer bravado and his tireless work in the Pattaya social set he certainly gets our vote.

But we do have a few questions. Earlier this year a British national called Andrew Tracy was arrested in Bang Saray for attacking a boy.

Mr.Tracy was already on trial for child sexual abuse. Tracy was arrested as a result of the quick actions of a British national Lee Booty, from Bethnal Green, East London.  Mr. Booty went with Tracy to Bang Saray police and to Sattahip Police and insisted on making a statement.

At the police station a Belgian interpreter turned up to translate/ fix things.  He called Niels Colov from his mobile phone. Why would he call Mr. Colov. I would presume so that arrest could be reported in his Pattaya People newspaper. 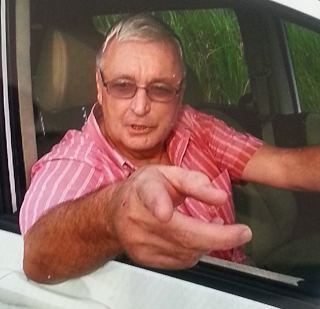 But no story appeared the following day. Why?

It beats the usual boring feed of petty crime and bar fights.

And Mr. Tracy has disappeared apparently on police ‘bail’.

Mr. Booty sensing something was going on stayed at the police station to see Mr. Tracy released within a few hours having allegedly paid in excess of 300,000 bail.

He vacated his house in Bang Saray also immediately. Further while the Pattaya Mail, and PattayaOne reported the original arrest – the Pattaya People did not.

The Pattaya People is not averse to reporting crime stories

Mr. Booty called me recently to ask me to remove a reference to the Belgian interpreter, Peter, of the Belgium Bakery, Bang Saray, and Niels Colov.  I did temporarily. The Belgium had a call from Mr. Colov and duly called Mr. Booty.  Mr. Booty was worried Mr. Colov could do damage to his business.

Why should he be worried about a saint?

And why does Niels Colov use the Logo of the Foreign Correspondents Club of Thailand in his newspaper? And why has he named the Editor of the English language newspaper as his ‘wife’ Laddawan Yingyong, whose command of English does not run to stringing a fluent sentence together and from whom he has been separated for years?

Here’s one of his stories from his Pattaya People. It is a barely disguised attack on Drew Noyes of the Pattaya Times, who was selling condos of the Thai National Housing Authority at greatly inflated prices – and for which Drew Noyes to this day is still fighting with .a buyer who was conned. At the time Noyes and and Colov were enemies.
Sweet talking foreigners

Then Drew Noyes and Niels Colov became friends and this is what he wrote later in a deposition to a court case brought by Drew Noyes against Andrew Drummond (yours truly – which was dismissed. 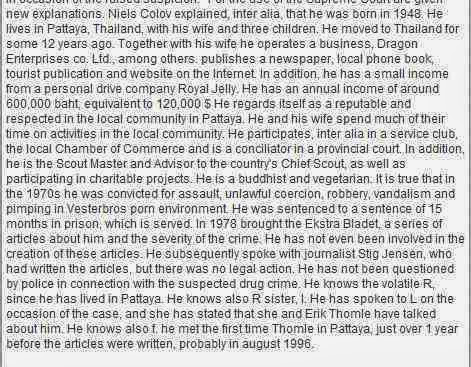 * Denmark has a very ‘modern’ approach to crime an punishment. Criminal records can only be sought on people within ten years of their crime. Short sentences are the norm in Denmark even for serious offences – Prison is not intended to be a punishment. Prisoners get home leave every three weeks Friday to Sunday night – even those convicted of violence, manslaughter and drugs trafficking.