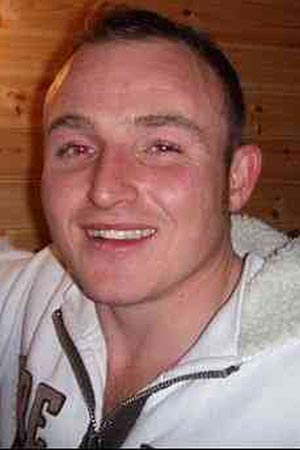 A young British father found guilty of drugs smuggling has been sentenced to death by a court in Indonesia.

Gareth Dane Cashmore, 33, from Wakefield, West Yorkshire received the sentence for attempting to smuggle 6.5kg of crystal methamphetamine into the country.

Cashmore, a former roofer, had originally been sentenced to life imprisonment, but that was increased to the death penalty by a panel of appeals judges on May 15th this year.

The decision has only just come to light after being published (Friday) on the Supreme Court’s website. In a brief conversation from his cell on a smuggled mobile phone Cashmore said: “I’m doing all right in here, I’m fine with it.

Speaking from his cell last night Cashmore said: “It’s me that’s made the mistake, it’s nothing to do with my family. I’ve got a son, how would you feel? I hope to be out to see him again before he’s grown up.

“I know I can survive here, my family were all in the army and I did some courses, I’ll survive this by hook or by crook, my family don’t have to worry about that”.

Rushmore said he was a resident of Pattaya, Thailand before moving to Indonesia. In Pattaya he was best friends with Andrew Davis, 42, from Stockport. He also listed himself on Facebook as a member of Nick Griffin’s right wing anti-immigration British National Party.

(Davis committed suicide at Pattaya Klang Shooting Range when after renting a .357 Magnum, firing 17 shots at a target he fired the 18th shot into his own head after putting the gun under his chin.)

Executions are still carried out by firing squad in Indonesia.

Cashmore was arrested, according to local media reports, by customs and excise officers at Jakarta’s Soekarno-Hatta International Airport on September 12 last year.

Officers said that the drugs, worth an estimated US$1.3 million, were concealed inside his modified luggage. During his initial trial at the Tangerang District Court in Jakarta prosecutors claimed that he was a member of an international narcotics syndicate who flew with Turkish Airlines by way of Istanbul to Jakarta.

They also revealed that Indonesian Customs and Excise officers together with police from the National Narcotics Agency had failed in an attempt to arrest Cashmore’s contacts at a hotel in Jakarta following his arrest. At his second hearing in May at the Banten High Court in Jakarta, the panel of appeals judges said they felt that Cashmore’s life sentence imposed previously by the district court had not sent a strong enough message.

“Narcotics are very dangerous substances that harm the people and the nation. They destroy the human resources that are one of the integral elements to our national development. We decided to sentence the defendant to death.”

Indonesia has some of the strictest drugs laws in the world. Just 5 milligrams of crystal methamphetamine, known locally as ice or shabu, is enough for judges to order the death penalty.

On Cashmore’s Facebook page he states that he works in “import/export” and lives in Jakarta. He lists a son named Harley Lewis

“We are aware of a British national who has been sentenced to the death penalty at the Court of Appeal in Indonesia. We continue to provide Consular assistance to him and his family.”

In May this year 55-year-old British mother Lindsay Sandiford was arrested in Bali, Indonesia allegedly trying to smuggle 4.7kg of cocaine onto the island.

Narcotics police subsequently arrested a British couple, Julian Ponder and Rachel Dougall in a sting operation with Ms Sandiford’s cooperation. All three are facing the death penalty if convicted and a further Briton, Paul Beales, who was also implicated is facing a twenty year sentence on a lesser charge.