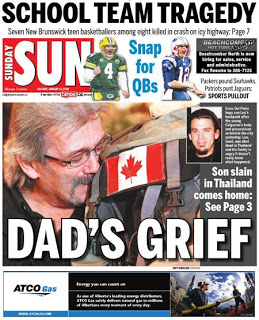 BUT FATHER WAS PUT THROUGH HELL!


Five years and five months after his son was gunned down by a Thai policeman in the northern hill tribe town of Pai – the policeman who shot him has admitted to murder. 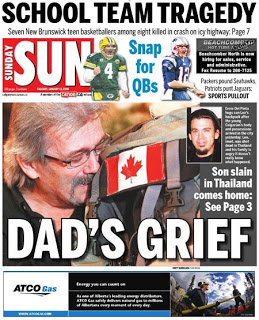 After putting the father of Canadian Leo del Pinto through ‘hell’ Police Sergeant Uthai Dechawiwat has finally admitting murdering the 24-year-old Canadian.  He has finally changed his plea to guilty and the court in Chiang Mai will announce a verdict on August 20th.

His change of plea only took place near the end of the prosecution case.

While out on bail, which he was immediately granted, Uthai beat his 19-year-old bride of two weeks to death with a piece of wood.

He gets no sympathy from Leo’s father Ernie del Pinto, who is in poor health. He said from Calgary tonight: “Five years, five months. That’s how long it has taken that son of a bitch to state the obvious. He has put me through hell.

“My lawyer advised me from the outset. ‘Look we are taking on a third world government and a third world police force we can’t win.  But we struggled on pestering our own government to commit itself to action.

“Thai police did everything they did to cover up for Uthai by intimidating witnesses. But thanks to many, including Surasee Kosolnavin, then Director of the Thai National Human Rights Commission, we have won.

“My health is not good but I want to fly to Thailand to see this man sentenced.”

Sergeant Uthai had pleaded not guilty to murdering Leo and not guilty of the attempted murder of Carly Reisig, 24, a fellow Canadian in Pai, Mae Hong Son province on January 6 2008.

He had claimed it was in self-defence. That he was falling down as Leo attacked him.

But forensics on the trajectory of the bullets showed the opposite – that he was above and shooting down at del Pinto.

Witnesses were told by police to support Sgt Uthai’s defence – a difficult request to refuse for people running businesses in the busy tourist centre.

But at the end of the day attempts by Pai police to influence the case were thwarted.

The Canadian Embassy in Bangkok has been monitoring Uthai Dechawiwat’s trial and a bus poster campaign was mounted in Calgary.

It is traditional in Thailand to half the sentence when a defendant pleads guilty. But Ernie del Pinto wants the severest penalty for the murder of his son. 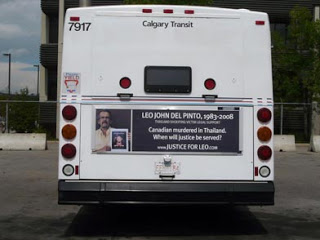 “He has murdered twice. If police had locked him up in the first place a 19-year-old woman would be alive now. This sentence should be consecutive to the life reduced to 25 years sentence he already has.

“There has to be a deterrent against police taking the law into their own hands. They have to be seen to be subject to the same laws as ordinary people and of course tourists.

“If not Thailand will be shooting itself in the foot”.