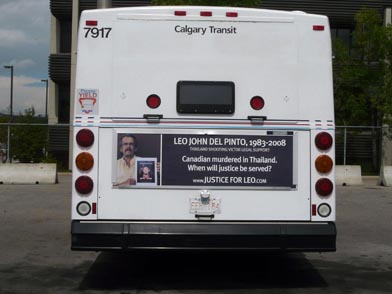 From Andrew Drummond, Bangkok, Saturday July 19 2008
The family and friends of a young backpacker who was gunned down by a policeman in Thailand have begun a nationwide poster campaign in Canada to demand the killer be brought to court.
Leading the ‘search for justice’ is Ernest Del Pinto, from Calgary, Alberta, whose 25-yr-old son was shot dead by a Thai policeman in the northern Thai village of Pai.
City buses in Calgary are now carrying the posters ‘Canadian Murdered in Thailand. When will be justice be served?’.  The campaigners, who are also getting together a petition, plan to take the campaign to buses in Toronto, Ottawa and Vancouver.
The move follows lack of action in Thailand and the exposure by the Thai National Human Rights Commission of a cover up into the ‘murder’ in January this year.
Mr. Del Pinto (below third from left) is also asking Canadians to stay away from Thailand until the matter is resolved.

Leo Del Pinto was shot in the chest and in the head by a Thai policeman in January. A Canadian friend Carly Reisig, 24, from Chilliwack, B.C. was also shot in the chest but she survived.
After the shootings local police chief Colonel Sombat Panya claimed that Canadians had made an unprovoked attack on Police Sergeant Uthai Dechawiwat in the northern village of Pai after he broke up a fight between them.
Uthai, he claimed, shot in self defence as he fell to the ground. His automatic had a hair trigger.
However witnesses and forensic evidence revealed by Thailand’s leading pathologist Dr. Pornthip Rojanasund contradicted the police story.
It was Leo who as he fell to the ground. He was shot in the chest and then a second shot was aimed straight at his head as he fell.
Witnesses under protection also said that Sergeant Uthai pistol whipped Ms. Reisig before shooting her under her left breast.
Thai Prime Minister Samak Sundaravej ordered the Thai Department of Special Investigation to take up the case four months ago.  Thai police are notoriously inefficient in investigating their own officers.
No policeman has yet to be prosecuted in connection with a government drugs war in Thailand which began in 2003 during which over 2,000 were killed, killed mainly, say human rights organisations, by policemen.
Family spokesman Ross Fortune said: ‘The officer concerned is still free and walking the streets and drinking in the bars. Is it not right for the family to feel upset?’
In Bangkok Kamol Kamultrakul of the Thai Human Rights Commission said: ‘We will be in touch with the DSI to discuss progress.’
Four years ago British backpackers Vanessa Arscott, 23, and Adam Lloyd, 24, from Devon, were gunned down by a Thai policeman in Kanchanaburi on the River Kwai.
Local witnesses to the shooting were scared to give evidence against the policeman, Sergeant Somchai Wisetsingh. But he was convicted and jailed primarily on forensic evidence.