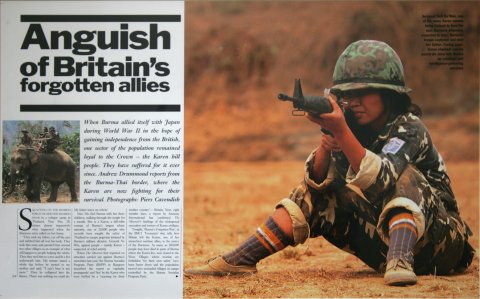 Andrew Drummond together with a crew from Twenty Twenty
Television travelled on foot for the BBC into the Karen State of Burma
‘Kawthoolei’ to investigate the widespread killings and rapes by Burmese
Army (Tatmadaw) troops on the civilian population.
No other journalists had been allowed such free access throughout
Kawthoolei, as the Karen called their own state, travelling
freely, visiting not only isolated communities but entrenched front
lines like the one above, separated by only 200 yards from Burmese
positions, and finally by-passing Burmese Army units to return to
Thailand.
Nor are journalists likely to get such access again, until there is a
change of government. The Karen National Liberation Army are now
pressed  right up against the Thai border.
The crew were fired on by Burmese troops during the making of the film.(But not in the picture above. The producer just thought they were)
After the film was completed Andrew Drummond went to the Ministry of
Defence in London and collected a Distinguished Service Medal for Major
Aaron Po-yin who was awarded the medal for saving the lives of two
British officers during a Japanese ambush during the Second World War.
Major Po-yin had been unable to come out of the jungle to collect it
in person as he had been fighting the Burmese ever since the British
left.

The report ‘Anguish of Britain’s forgotten allies’ was publish in the Observer colour magazine to coincide with the film.
Today the K.N.LA. is pressed right up against the Thai border and the atrocities continue.
‘Burma’s Forgotten War’, BBC 2 Everyman: Producer George Case.
Written by Andrew Drummond
Observer investigation ‘Anguish of Britain’s Forgotten Allies’ 1989 Observer Magazine.

Lord Alton of Liverpool said later when he visited the Karen:
‘A
BBC television documentary, made by the respected S.E. Asia Foreign
Correspondent of The Times, Andrew Drummond, was entitled Britain’s
Forgotten Allies. It is a phrase on the lips of all the Karen leaders I
met.’
Read the full text here.