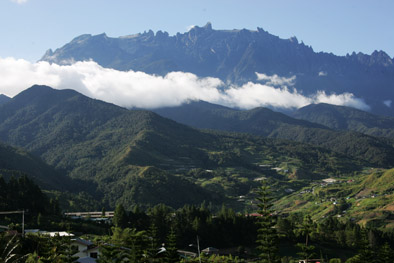 From Andrew Drummond
Ranau, Sabah, Malaysia, July 23 2007
Pictures Andrew Chant
The haunting and jagged hulk of Mount Kinabalu towers over some of the most beautiful jungle in the world here at a place called Ranau in what was formerly British North Borneo.
But for some 641 British servicemen of the Royal Artillery and Royal Air Force there was no pleasure in gazing upon the region’s highest mountain –  and all those that did died.To the last man they fell in its shadow, either from starvation, illness and exhaustion, or by a Japanese, rifle-butt, bayonet or sword. The lucky ones were shot

But without even one man making it home to tell the tale, these gunners and airmen become the forgotten heroes of one of the worst atrocities of the Second World War.
But now 62 years on they are finally to be honoured where they fell as finally a marble memorial plaque is ready to be unveiled in their honour.
These men were the British heroes of the Sandakan-Ranau death marches. They are so called because the 641 Britons and 1,700 Australians were literally marched to their death along a 160 mile route travelling west across North Borneo in the closing days of the war as the Japanese fled the allied advance.
The first batch of 455 men left Sandakan on in the north west on March 19th. 1945 to march to Ranau where, having been held up by bombing ahead of them, they were forced to build their own huts. Only 195 survived the march.  Having built the huts only about 30 could muster the strength to even climb into them.
Of those that died on the way Australian survivor Keith Botterill recalled:  ‘We climbed this mountain 30 miles from Ranau.  We lost five men on that mountain in half a day.  They shot the five because they could not continue. I thought there was safety in numbers. I just kept going.’‘No effort was made to bury them. They would just pull them 15 yards off the track and bayonet them or shoot them. There was nothing we could do’.

In the second group some 530 men set off with Japanese guards and Kempetai (the Japanese Gestapo) taking up the rear to finish off stragglers. Of the 530 only 183 made it to Ranau. Of those 41 were British.
Soldiers who could go no further made their goodbyes to their colleagues as they awaited their own executions.
Said Australian private Nelson Short: ‘If  blokes could not go on we just shook hands with them and said, you know, hope everything’s all right. But they knew just what was going to happen.  There was nothing you could do.’
But when they arrived they found that only six men were still alive from the first march, and only one Briton.
The third march comprised of 75 men, the only men still able to walk out of the prison camp at Sandakan. Nothing was ever heard of them again.  It is not thought they made even 60 miles.
The 288 survivors ,who were unable to leave the Sandakan start point, died where they lay with no food or water. The same happened in Ranau.
‘You’d wake up of a morning and you’d look to your right to see if the chap next to you was still alive. If he was dead you’d just roll him over a little bit and see if he had any belongings that would suit you; if not, you’d just leave him there. You’d turn to the other side and check your neighbour; see if he was dead or alive’ – Keith Botterill.
Matters were no better at the camp they had left.  Prisoners on punishment placed naked in a cage at the edge of the camp and starved for a week. At the end they were allowed to eat from a trough with the local dogs.
‘We’d all eat at the trough together. If you’ve ever tried to pull a bone out of a dog’s mouth you’ll know. The dog would fasten onto your wrist to get the bone back,’ added Keith Botterill.
When it was clear the Japanese had lost the war all the remaining prisoners both at Sandakan and Ranai were executed.
Evidence shows that the Japanese continued with their executions knowingly over a week after the Japanese surrender, hoping to destroy all evidence.
According to Japanese soldier Yashitoro Goto testifying on the killing of those left behind in Sandakan ‘There were 23 PoWs and under orders we lined them up and shot them. Then we dragged the bodies into a nearby air raid shelter and filled it’.

Just young men: Left: Leading aircraftsmen Lesle Mockridge and Leslie Barnes. Barnes died at Sandakan, Mockridge made it out before the marches.
*Les Mockridge story
Below left: Another vitcim RAF Sergeant Thomas McDermott. Survived the march but died at Ranai
The final prisoner at Sandakan was killed in the following way according to a local Chinese witness, also at a war crimes trial on the island of Labuan.
‘Sergeant Major Murozumi made the man kneel down and tied a black cloth over his eyes. He was so weak his hands were not tied.  Murozumi  cut his head off with one sword stroke.  Murozumi pushed the body into the drain and the head dropped into the drain too.’
Six Australians escaped, including Keith Botterill and Nelson Short, and lived to become key witnesses at war crime trials. The Japanese Commander of Sandakan Captain Hosijima Susumi was tried and executed along with eight others.
With no British survivor to testify Britain’s reaction was muted. There are small memorials in St.Clement Danes and at the Royal Artillery Garrison Museum. But for 62 years they have been all but forgotten in the jungles here.

But next month on August 17th Britain’s unsung heroes will be remembered in a ceremony conducted by the Anglican Bishop of Sabah and attended by British High Commissioner Boyd Cleary.
Sevee Charuruks, the guardian of the Kandasang War Memorial, just east of Ranau, where the plaque will be dedicated, said: ‘This has come 62 years late but it is better late than never. The Australians have been remembered here and on memorials in Sydney, Melbourne and in every state of Australia. It is their holocaust.
‘I always felt sorry for British people visiting here. Their relatives were not properly honoured.  But now at least justice is being done.’
There was no love lost here for the Japanese. They killed many people and raped many women.’
The memorial was organised by Colonel Paul Edwards, Defence Adviser at the British High Commission in Kuala Lumpur after he visited the Australian memorials.
‘There was not a Union Jack at Sandakan, nor was there a proper memorial at Kandusang. It was clear our men needed clearer recognition’.
He said he had also received letters of concern from members of the ‘Children of the Far East Prisoner’s of War Association’.
Colonel Edwards raised the cash for a flag and plaque by raising cash from Britons living in Malaysia and also with a settlement from Malaysian government sources.
Added Colonel Edwards: ‘It is hard to imagine the abuse and the appalling conditions these men suffered.  It is our duty to remember them.’
””””””””””””””””””””-
The last witnesses of Sandakan
From Andrew Drummond, Paginatan
A Borneo woman who was just a young girl when she who helped British and Australian prisoners during the Sandakan Death March still has the wedding ring of a soldier who died and is anxious to know who he is.Domima Akoi, (below) a native Kaduzan, was just thirteen, and out feeding the family pigs, when she saw a group of soldiers waving from inside the jungle near her home.

‘Somebody threw a stone in my direction and when I looked across I saw two white men making hand signals to give them some food. I ran home to tell my father there were British soldiers in the bushes. He said we should help them.
‘I went out and left them food everyday, rice, tapioca, fruit. Whatever we ate, they had. There were five or six of them.
‘I told my father, if the Japanese shoot me it’s your fault,’ she added with a laugh.
‘On the seventh day they did not take the food. But they left a small tin with six gold rings in it. It was so sad. I only kept one ring. It has some markings on it, where it was made I think. Perhaps someone will be able to trace it.
‘During the Japanese occupation times were bad. My father used to lock me up in the house everyday when Japanese troops were around. Many people were killed and raped by them.’
Domima, now 74, together with farmer Saumin Kaingal, 80, are the only witnesses to the Sandakan marches still alive.
Saumin helped hide three Australian soldiers after they had escaped the camp at Ranau.
He built a bamboo and rattan hut for them and fed them with the help of his uncle and two other villagers in Kaparingan everyday for over two months until allied forces arrived.Saumin (right) said: ‘They were incredibly lucky really. Ours was the only village in the whole area that was never bothered by the Japanese. We had heard from people in other villages that the Japanese were cruel and I thought they would kill me for sure if they ever found out.

‘We did not like the Japanese. The British left us alone and there were schools and other things. We hated the Japanese for what they did.
‘We knew the end was coming when the bombing stopped. When we heard that there were allied soldiers nearby we half carried the soldiers to them.  It took about eleven hours. We travelled at night because not all Japanese had surrendered.’
Additional pictures courtesy of members of the Children of the Far East Prisoners of War Association.
*Laden. Fevered.Starved
* Children of Far East Prisoners of War Association