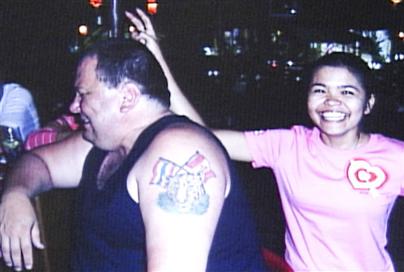 A Thai court today jailed for life a Thai wife, her lover, and a professional hit man for the avaricious murder of her Canadian husband.

Dale Henry, 48, was murdered on the orders of his 27-yr-old wife Maneerat  nicknamed ‘Nee’, the court found. She had conspired with her boyfriend Amornsak Ketkaew, and hired a professional killer Jinda Sae Tee, who faces another assassination charge in Thailand.

Although Henry is by no means the first foreigner to have been murdered on the orders of his Thai wife this case shocked the local foreign community in Thailand.

Although Henry is by no means the first foreigner to have been murdered on the orders of his Thai wife this case shocked the local foreign community in Thailand.  Henry had no idea that his wife was anything but in love with him.  And right up until his death he told relatives how lucky he was to have his live with his ‘darling sweet Nee’. He was totally besotted.
All the while Nee was plotting her husband’s death  for the US$1 million insurance money. She already had the family home, which as a foreigner he had to buy under her name.
On February 3rd last year Nee put her plan into operation.  Once Henry had fallen asleep she contacted her lover  by mobile phone and summonsed him and the hit man to her house in Ranong, near the Burma border, to put an end to their six year marriage.
Dale Henry was gunned down  as he slept.
Although Henry had bought her a home and car and generously provided for her out of his US$10,000 a month salary as an oil company safety officer, his wife was also aware of his ?1 million life insurance policy made out in her favour.
Henry, who was born in Victoria moved to Thailand ten years ago. He had also worked as a fire-fighter in Cochrane, Alberta. He met Nee while holidaying from a job as a safety officer with an Noble Drilling in Nigeria. Nee was a bar girl on the holiday island of Koh Samui.
Immediately after his death his wife’s family started looting his house making off with his motorcycle and cars.
Dale Henry’s sister Mary Jane Matheson from Calgary said: ‘Dale was a very happy, generous fellow. He loved his life and it made him so happy to be able to provide well for Nee and her family. None of them needed anything. His monthly salary was more than enough ($10,000.00 US). Right up to two days before he died, he had e-mails to his ‘Darling Nee’  and others to friends of his saying how he was so lucky to have such a great wife!
‘There was another telling Nee that he didn’t care how much a better roof was for the home he bought for her mother would cost..he said ‘Mom deserves the best’. Also in his mail was a letter arranging boat plans, he was going to finally build one. One of his big dreams since he was young…Such a shame…he would have accomplished so much more and made a positive difference in many lives.’
Mary-Jane said that the insurance money would be staying in North America. ‘It is incomprehensible for me to understand this depth of evil, right from the gates of hell’.
The trial had been monitored by Dale Henry’s brother Richard, also from Calgary and officials from the Canadian Embassy in Thailand.
The brother Richard was concerned that justice would not be meted out. Dale Henry’s mother-in-law was apparently not very grateful for her new roof. Outside the court she told Richard Dale still owed her money.
The defendants also got bail after his wife withdrew a total of 800,000 Thai baht ($25,775 Canadian) cash from his bank account in smaller amounts on six different occasions while she was still in jail.

Both Henry’s Thai wife and lover can appeal the verdict and be granted bail. If they lose their appeal they can appeal again to the Thai Supreme Court. The process can actually take eight years to get somebody into jail in Thailand if they have the cash for the legal charges involved.

Meanwhile the trial of a Thai policeman accused of murdering Leo Del Pinto, from Calgary, in Pai in January 2008, has yet to be resumed. It was abandoned earlier this year after Thailand’s Department of Special Investigations conducted an improper investgation.

Although Richard Henry has power of attorney over his late brother’s estate most of it has alreay been taken by Henry’s wife and family.