This video has alarmed people in Bangkok. It apparently shows police covering a CCTV camera at Wat Benchampit near the centre of the protests after Prime Minister invoked the Internal Security Act and the Criminal Court issued a warrant of arrest for Suthep Thaugsuban, protest leader and Deputy Democratic Party leader for incitement to riot and causing chaos in the country.

Police acting on the order of  Thai Prime Minister Yingluck Shinawatra were today granted an arrest warrant for the country’s former Deputy Opposition leader  accusing him of incitement to cause chaos in the country.

As anti-government demonstrators began occupying further Government Ministries in Bangkok police officers were at  Bangkok Central Criminal Court seeking a warrant for the arrest of Suthep Thaugsuban, who has been leading the protests.

Pol Major General Thawat Boonfuang, deputy secretary general to the prime minister, said the demonstration which has escalated beyond the legal limits could result in treason charges against Mr Suthep.
Meanwhile protesters continued with their occupation of government ministries.

First to go was the Agriculture and Cooperatives Ministry protesters turned up shortly after 11 am and subsequently staff were ordered to go home.

Civil servants in three other ministries, the Tourism and Sports Ministry, the Transport Ministry and the Interior Ministry abandoned their posts as hordes of protesters moved in on their offices.

Tourism and Sports Minister  Somsak Pureesrisak  said: “We have to go. They are going to cut off our water and electricity from outside anyway, which will make work impossible.”

The occupations followed the occupations yesterday of the Finance Ministry, Budget Bureau, the Public Relations Department of Thailand, and the Ministry of Foreign Affairs. 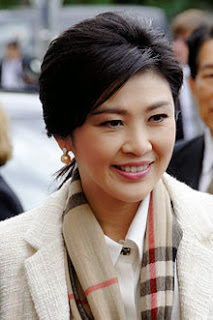 As the demonstrators surged around the ministries and police sought their warrant,  opposition Democratic Leader Abhisit Vejjajiva, an Eton class mate of Boris Johnson,  led a no confidence debate in the Thai parliament against the government of Yingluck Shinawatra.

He denounced Prime Minster Yingluck Shinawatra  -the younger sister of exiled Prime Minister, and former Manchester City FC owner Thaksin Shinawatra, – as the  ‘centre of corruption practices’ allowing party members to rob the country from ‘the tops of the mountains to the bottom of the sea.”

And he said although Yingluck’s Pheu Thai Government held the mandate by a large majority, it had caused considerable hardship to most of the people by allowing its members to be corrupt.

From Sunday half a million protesters have gathered on the streets of Bangkok to lodge their protest and call for the resignation of Yingluck.

The protest came after her government tried to force through an Amnesty Bill which would allow her brother Thaksin, who was convicted of corruption charges to return from exile in Dubai.