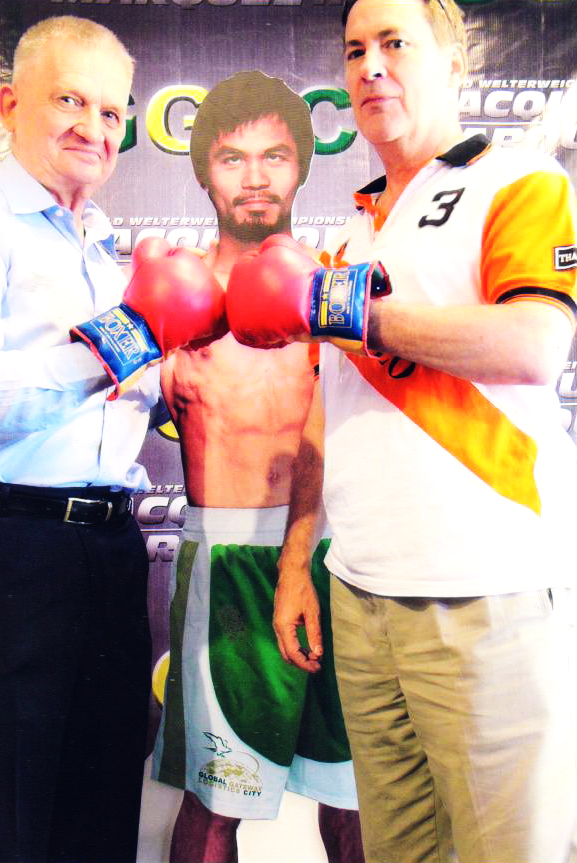 American publisher Drew Noyes has interrupted his business trip to Angeles City in the Philippines to take the unusual step to announce in his newspaper website that he is not having sex there.

In an exclusive story in the Pattaya Times he puts on his boxing gloves to reveal he is there with businessman and former Copenhagen pimp Niels Colov to help join Angeles City together with Pattaya.

He has previously announced he wants to link both with Las Vegas! He is not there for sex which, he says, he can get in Thailand.

He said he went to represent Pattaya City and to look for new opportunities ‘to expand both their businesses in the Philippines as the ASEAN Community will form in 2015′.

Flying the colours of the Polo Club of Thailand Noyes poses with Niels Colov (left) and a cut out picture of a boxer, perhaps as real people are getting harder to find.
—————————————————————
‘The new Angeles Media Group was formed by Mr. Colov. Angeles City has the same reputation and Pattaya had in the past and still has to some degree today so the idea was formed to make Angeles City a

Sister City with Pattaya.”
( AD: Mmm. And what reputation would that be?
I hope the Mayor knows about this as officially his policy is to transform Pattaya into a family resort.)

He adds: ‘However, former News of the World tabloid newspaper journalist and one-man blogger Andrew Drummond falsely reported the Pattaya businessmen which included Niels Colov and Drew Noyes had gone to Angeles City Philippines for sex. Andrew Drummond knows all to well if guys want sex they can stay in Thailand”.

Actually while I did not say Noyes was going to Angeles City for sex, nor I am particularly interested, I did say he was going on the ‘sexpats shuttle’ – the nickname for the flight which directly links Angeles City to Bangkok – and that he was meeting up with the gang from North Thai  or NT Realty….ouch!

Noyes incidentally goes on to say I am known by many to ‘frequent bars and pay for the company of young ladies’. And of course he repeats I have been convicted of libel.
(My only convictions for criminal libel in forty years was when I exposed two sleazebags from Pattaya commercial gay sex scene.

The convictions did not hold up I won both on appeal).

Still at least he has not accused me of drugs trafficking,  the libel for which he is currently before Pattaya court.
It also seems I was spot on about him meeting the boys from NT.

‘ Pattaya businessmen Drew Noyes and Niels Colov – who both ran the first Expat Clubs in Thailand and each own several  successful businesses employing many Thais – went with a full crew of Pattaya People Media Group reporters, presenters and video cameraman to document meeting foreign businessmen to Angeles City, Philippines who are successful in real estate development in both Pattaya and Angeles City like John Seymour of NT Realty Asia. The(y) also visited the owner of Tequila Reef with restaurants in both cities.’


I am happy to confirm Drew Noyes’ claim that he can indeed have sex in Thailand.
Below is a picture of his latest squeeze – Naam – in the centre of this picture from when she worked at the Buffalo bar in Pattaya 3rd Road, possibly the cheapest ‘take-out’ bar in the business in Pattaya.

She now fulfills his needs as his minor wife as his major wife Kung is happy holding his property.
He can have sex in Thailand but not with Filipinas apparently as

Mr. Noyes claims in his Pattaya Times newspaper that he has been 14 years in service to his Majesty the King.
This may not be true. His first business ventures in Thailand were the Lollipop bar and then the Zebra beer bar in Pattaya Soi 2 Beach Road.
Meanwhile Colov, who had a history in Vesterbrogade in Copenhagen before coming to Thailand, for pimping, receiving stolen goods, and violence, has joined the fray on Noyes’ behalf and publish a comment on the Pattaya People Media Group Facebook by a German called Wilfred Hesenius who thinks he is being witty and refers to me as being the ‘best customer in many bars and has a pedophile heart beating for young Thai ladies. Andrew ya ol bugger! Pattaya never keeps a secret for a long time ”
Wilfred, who says he is a freelance warranty surveyor for Denton Noble, however does not seem to have lucked out in Thailand.
Comment:
Who says we are negative here? This move is definitely good news for Thailand.
HELP ME SUE ANDREW DRUMMOND OR I’LL HAVE YOU CHARGED!
UPDATE – MONDAY NOVEMBER 21 2011
Publisher Drew Noyes has threatened a former young employee in the Philippines that he will sue her if she does not co-operate with him to sue this site.
In messages last night Noyes, who tells enquirers that he is unconcerned and does not read this site when confronted about allegations against him, contacted one of the two girls in the Philippines, who made statements here about his behaviour.
The girl said said his offer of free accommodation, work visa and a minimum 12,000 baht a month salary went up in smoke after she refused to become his mistress. After a months work she got just 4,000 baht.
She had been upset after he took her to a go-go bar where girls danced naked, to make his spectacular offer.
Last night the girl contacted to me to say: ‘ Hey. Its me XXXX . Drew he texted me and said I need to co-operate (with) him. Ask me to send an email about statement at drummond site. They went to police station to file case and if I’m not to co-operate he will include my name.
“I won’t take back my statements against him.”
When I asked what Noyes wrote, she forwarded his message:
BAD MAN

“Rose. We have a big problem. A bad man named Andrew Drummond has posted on a blog saying you told him I cut your salary because you would not have sex with me then ‘threw her into the street’ with no place to live. Kung and I are going to the police station in the morning to file a criminal complaint.”

Since the Filipina girls gave information to this site a Thai girl has come forward in South Pattaya to say Noyes said she should be his ‘gig’ when she asked for a raise in salary at PAPPA and the Pattaya Times.
Comment: Well its easy to see Noyes’ ploy here. He hopes by intimidating the girl and filing a charge she will be scared to come to Thailand to testify. That may not be necessary. In special circumstances particularly where delicate sexual matters arise the Thai Human Development and Social Development Ministry can support video interviews. He might need to explain how he employed Filipinas on tourist visas too. But perhaps if ‘Kung’ (his wife) really wants to know the truth maybe she will let the girl come to Thailand and testify without any threat over her.