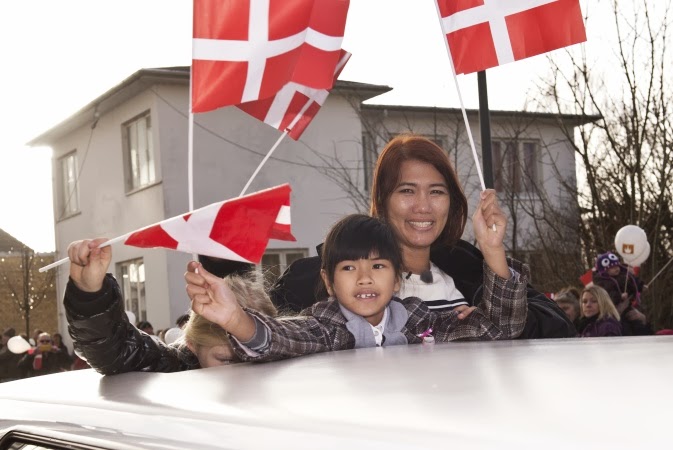 A young Thai girl called ‘Im’ was this week welcomed back to Denmark with her mum in what was almost a ticker tape parade after being deported by the government when her stepdad died of cancer.

The Danish government had ruled, as stupid governments do, that ‘Im’ had more in common with Thailand than this small but nevertheless historic Scandinavian country.

She was greeted at the airport in Aalborg by her schoolmates after being allowed to return. The government U-turned after an enormous press and public outcry. The  pictures are enough to bring tears to your eyes.

Denmark like most European countries is suffering from serious immigration problems. Its led to, as usual the growth of support for right wing groups. The country has however been fairly tolerant in that regard and has even allowed the existence of the Danish National Socialist Party.

They do not get much attention but get more votes in times like this.

The Danes had an active resistance in the Second World War. My mother was a teenage messenger.

Many older Danes still have a hatred for the Germans who occupied their country – although of course both German and English is taught in Danish school. I believe they used to have an RAF (Royal Air Force) Day in Denmark to celebrate a Mosquito raid on a Gestapo prison in Aarhus – even though lots of Danes died.

I was actually born in Copenhagen as my mother, who apparently loved the RAF, er, well, ONE of its pilots, went back to her parents for my birth – while my father was away on one of his month long flying schedules.

Thankfully I was whisked back to my parental home at the time in Ascot, Berkshire, before I knew how many wives Henry V111 had or knew the origins of a Cornish Pastie and thus did not have to face British immigration grilling.

Bet there’s a few Danes on Thaivisa that don’t like this news though.