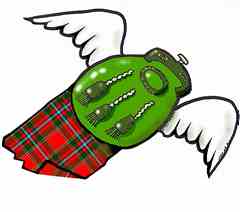 In this video we look at how their development projects were promoted on local television, the real victims, and how a media baron reacted when he was asked to step in.

Despite his claims here David Ames’ worldwide property empire existed in his own mind. He did not have the cash for such high end ventures – that’s where the public came in.

Picture: David Ames with Aussie tennis player Pat Cash breaking ground at the Merrick’s Resort in Barbados. Not much work has been done since. The resort was promoted without even planning permission. The view of the Barbados government towards David Ames makes great reading here and gets a wonderful put down after Ames’ wife made thinly veiled threats to take her ‘US$400 million’ elsewhere. No class at all.

Ames sold off plan and used the cash raised from the pictorial paradise pipe dreams that he sold by advertising on the net – and in Thailand in the Pattaya People. Recently Harlequin gave a holiday at his one – unfinished hotel – in St. Vincent as a ‘Britain’s Got Talent’ TV show prize.

He has used top British lawyer Carter-Ruck to scare off critics. But of course its not his money he threatens to sue with.

In fact as we all now know – many if not most of the projects in Thailand were not even started. Haughton promoted two projects on the same plot of land and did not build either.

For his part Niels Colov, a former President of the same Rotary Club, accepted three homes which WERE built at Lake Villas as his payment for promoting these developers.

Most of the owners at Lake Villas live in the UK, where the project was first promoted by Ames. They bought the properties as investments. That’s how David Ames together with Houghton, promoted them as in the video we show here.

What the owners did not know is that these developers would build these places and rent them out themselves and keep the cash. And as they ‘owned’ the land the houses were built on they could do what they want. Owners arrived to find their holiday homes occupied.

When Colov was notified by the Lake Villas Owners Association of the problems over this, and Haughton’s stranglehold over the management committee his reply was in affect to tell them to take a running jump – with the implied threat that he would write bad stuff about them.

Is that the normal way for a ‘journalist’ to react?
The owners who had withheld maintenance charges found that thugs had turned up and ripped out their electric meters and cut their water pipes. No such treatment for Colov – who was the biggest debtor of all.

Worse was to come at the Harlequin /TPME ‘Emerald Palace’ project where Haughton sold the units but instead of handing the deeds, presented them to the bank as his company’s, for a 71 million baht loan. Emerald Palace to this day is being promoted in the Pattaya People.

Investors were promised their money back, but never got it. Brits were even promised a condo in Emerald Palace – Unit 709 – to be told when checking in that Haughton had not notified his company that he had taken the cash – which was deposited in the National Westminster Bank in Oxford.

Property deals like this, and similar ones in Hua Hin, and Phuket, are giving Thailand a very bad reputation. Although these frauds are committed by foreigners on foreigners, only the Thai authorities can stop them. And of course these men all claim to have connections at the very top in Pattaya.

Malcolm Leggett working a rice paddy in Isaan
But everybody deserves a second chance. Nevertheless Colov revealed himself in the Malcolm Leggett case. Here is a Briton who went to him for help after meeting him at his expats club only to be stripped, he says, of the last cash he ever had – ending up in a rice paddy. A stream of foreigners have left his employment with tales of a man which defy the projected image.

An impressive list of advisors but Colov has nothing to do with the FCCT and has no permission to use their logo as an endorsement nor does the mother of his three children Laddawan Yingyong do much editing.
Colov again revealed his less publicised side by joining forces with his arch-enemy Drew Noyes, publisher of the Pattaya Times, who recently was arrested for trying to extort the Thonglor clinic out of 7 million Thai baht on pain of bad publicity in his newspaper, and readers here will be reading more of this relationship later. Three years ago the two were at loggerheads.
The fight was over Lance Frederick Shaw, a well-known Australian con-man, who featured on the TV series ‘Big Trouble in Tourist Thailand’ and was arrested at Suvarnabhumi airport.

Shaw operated a gold share scam from Pattaya ripping off foreigners the tune of tens of thousands of pounds each. Somehow the publishers of the Pattaya Times and Pattaya People were at each other tooth and nail over him. (I am in possession of some of the correspondence).

One publisher was ‘looking after the victims’ and the other was allegedly ‘looking after Lance Shaw’. But in any case Shaw disappeared from the system again. The man campaigning on behalf of the victims soon forgot about them!
(Legal Note: The claims against Niels Colov involving Lance Shaw were made by Drew Noyes.

Bearing that in mind I am happy to place little credibility on them)
I have also known Colov for over 20 years – not personally though. A couple of times the media invited members of the FCCT for weekends down in Pattaya and I went along. On one of these occasions Colov – who had started off as a partner in the Pattaya Mail – introduced himself as the new media kid on the block.

To confirm the foreign media’s already predetermined opinions – the Pattaya media hosted the first junket in a ‘hostess’ bar!