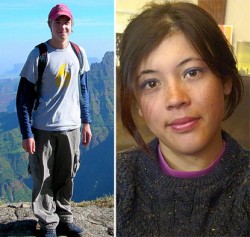 From reports in the country’s Quang Ninh province it has already been established that the boat was neither insured nor allowed to operate after dark when the accident happened in a tropical storm late last week.

The young Britons aged Tim Roney, 22 and Karen Puddifoot, 27, were cycling around the world to raise cash for the British Lung Foundation.  They were among 25 passengers on the tourist three story cruiser on Halong Bay in the Gulf of Tonkin, when storms, which have been ravaging south east Asia for the last week, struck.

The British friends, from Northwood, set off on their trip in June and aimed to cycle 21,000 miles through 12 countries. Before leaving Mr Roney, a ski instructor, said: ‘I’ve always dreamed of doing something like this. A few people have told me I must be mad but this is the biggest adventure of my life.’
In a statement Mr Roney’s family said: ‘Tim was extremely sociable, talented and adventurous and always had a smile on his face.’

Ms Puddifoot’s family said: ‘She was talented, hard working, independent, strong-willed and brave. Losing Karen has left a deep hole in our family.’ A former Watford Grammar School for Girls pupil, Ms Puddifoot studied at Wimbledon School of Art before working in the film industry.

The boat they had chosed in Halong Bay was the boat’s first outing apart from one earlier trip under-going sea trials, it was reported  today.

Two Vietnamese and a Frenchman also drowned in the incident yesterday. Other passengers were treated for shock and minor injuries. The British couple had boarded the boat at Ti-Tong island along with the French man.  The incident happened an hour after dusk last Thursday.

A spokesman for the Foreign and Commonwealth Office said today: ‘Our consular officials from Hanoi are providing consular assistance’.

‘Arrangements are being made through an insurance company to fly their bodies home.’
British Embassy officials travelled to Halong Bay, some 100 miles east of the capital, Hanoi, to help officials confirm the identify the two UK travellers.

The boat sank in strong winds and choppy waters as it was returning to port last Thursday evening. Twenty-five tourists and seven crew members were on board.

The boat QN-5298, owned by the Bien Mo Company, was heading for Cat Hai island in neighbouring Haiphong Province when it was hit by the storm, the Captain Do Long told police.   The boat capsized and water filled two of the three levels, spilling the passengers and crew into the water. Some passengers were able to climb to the third level.
The passengers were buffeted by high winds, rough waves, and driving rain.

The survivors were picked up by other boats which rushed to the scene.

According to Thahnien newspaper in Vietnam the brand new boat built at a cost of Ãƒâ€šÃ‚Â£360,000 said Pham Van Bac, the director of the Bien Mo Company,  and was considered to be the ‘biggest and most beautiful in the area’ but it was not insured and not licensed yet to operate at night.

An investigation has been launched by Quang Ninh police and the provincial authority.