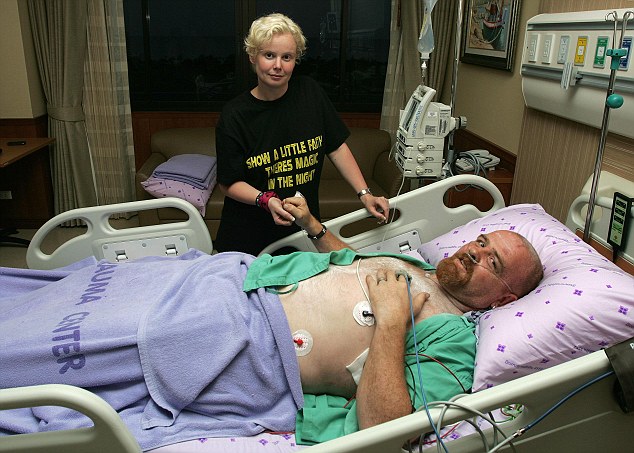 Pictures: Andrew Chant
A British honeymoon couple today spoke of their miraculous
escape from death when a train on the Orient Express line in Thailand
crashed killing ten people and injuring over 50.
Richard Stroud, 43, and his bride Dawn, 34, were thrown from
their beds as the Bangkok bound train left the rails and crashed into
another train. Their carriage came to an abrupt halt and then rolled
twice sending the couple spinning.
‘It was like we were in space when the carriage rolled. One minute I saw
Richard on the other side of the carriage, then he was gone, then he
was there again. We were literally flying,’ said Dawn, a retail manager
at Home Bargains in Stroud.
‘I ended up on top of Richard then our beds ended up on top of us.’

Honeymooners Dawn and Richard Stroud in Hua Hin Hospital
Richard and Dawn were heading back to Bangkok for a flight home last
night after a two week holiday in Thailand, which began with two days in
Bangkok, a week the northern capital Chiang Mai taking in some jungle
trekking.
For the last week they had gone south of the island of Koh Meuk in
Thailand’s Trang Province. ‘It was idyllic. Because of the down turn in
tourism we had a beach and a resort, which can accommodate 300 people,
virtually all to ourselves’,  said Richard, Materials Manager for G.E.
Aviation in Cheltenham, previously married with two sons.
‘We decided to take a first class cabin back to Bangkok taking the same
route the Orient Express takes.  It may have saved our lives.  We were
asleep when we were awoken by the whole train shuddering.
‘I shouted down to Dawn in the bottom bunk ‘What the hell is that!’.
Then suddenly we were both thrown out of our bunks.  I hit some metal,
and then came down on the sink.  Then the train started rolling.
‘When we recovered it was pitch black but we found some lights we put on
our heads for caving and switched them on. All around us we could hears
moans and crying.
‘After a while rescuers came and they were very good.  They put a neck
brace on me and pulled me up and out through a window as the train was
on its side.
‘As we walked away we had to pick our way through mangled metal and
wreckage and the bodies of those from a 2nd Class carriage, who were not
so lucky.’
Richard and Dawn Stroud will have to wait two weeks before they are
allowed to fly back to the hometown which bears their name – Stroud.
Doctors have told Richard he is not fit to fly in the meantime.
He has two fractured ribs and bad body bruising.
Thai State Railways Governor  Yuthanna  Thapcharoen said: ‘Among the 10
people dead is a 2-yr-old girl.  We have already begun an enquiry into
why the train left its tracks and I cannot comment further.’
The Thai News  Agency said a switching error may have been the cause of
the crash near Hua Hin, a Thai beach resort 150 miles south of Bangkok
early this morning.  The train was due in Bangkok at 08.25am.
But it is also being  reported that the train’s driver had gone through a
red signal and that the train was travelling too fast to successfully
traverse a junction.
NB: Foreign/Home News Desks: final death toll and injuries likely to change:
Ends.-