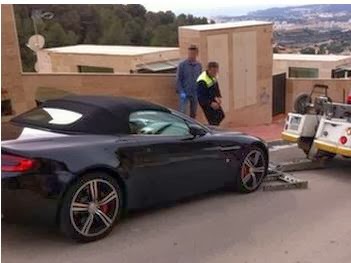 OVER 100 ‘WOLVES OF WALL STREET DOWN’ – 13 BOILER ROOMS TERMINATED

With over 100 people arrested in swoops on ‘boiler rooms operators’  in Spain and Britain yesterday detectives of Britain’s City Fraud Squad were quoted in respect of Thailand saying it was a ‘hostile environment’.

Newspapers are now referring to those arrested as ‘Wolf of Wall Street’ fraudsters and Commander Steve Head,  boss of Britain’s Economic Crime Directorate described ‘Operation Rico’ as the biggest operation yet against these people.

“These people have no conscience in terms of what they do to people’s lives. This is not at all a victimless crime.

“This network has been dismantled, hopefully we have sent a message to those who think that it’s an easy crime that it doesn’t matter where you are, we will come after you”, he said.

Police wheeled away an Aston Martin and Ford Mustang when they raided plush mansions. However, if the
operation is anything like a previous one in Spain, the cars and homes will be
on rental and hire agreements, and the real cash has already been spirited
away.
According to reports today the City Fraud Squad had closed down a syndicate operating worldwide, which had taken over US200,000 from people on share fraud deals, offering punters 20% to 40% returns.
Reported the BBC:  “Detectives acknowledge that boiler room fraudsters will not disappear, but they are more likely to operate in future in the more “hostile” environments of Thailand, Indonesia and the United Arab Emirates.”
In the future?  Boiler rooms have of course been in Bangkok, Kuala Lumpur, Dubai and Jakarta and Manila for over two decades.  And the operators will be laughing at the thought that the operations closed in Spain only took about US$200 million.
These places are hostile to British detectives because (1) They stand out a mile on surveillance, (2) Some significant Thai Police are working with the boiler rooms and (3) Significant Thai Army officers are working with the boiler rooms (4) Boiler room bosses here are dancing in high society.
Having said that there’s a little teaser in the information from detectives about Thailand’s hostile environment.
The City Fraud Squad have files on the active players in Asia and so does the National Crime Agency have files which they inherited from the Serious Organised Crime Squad.
“So many photographs have been taken from inside bars and clubs in Thailand that I could wallpaper my house with them, “ a British detective recently told me, adding  “But my wife would not approve”.
But they are not the only people on the trail of Bangkok’s boiler room boys, who now own a large slice of the tourist related food, drink and sex industry in the Thai capital and in other Thai cities such as Pattaya and Chiang Mai.
A private syndicate is chasing them in Bangkok and media investigators are apparently being offered up ‘targets’ on a plate.
Two interesting quotes from stories of the recent arrests:
“They’re young people who want to earn good commission and want to drink themselves into the ground,” said Detective Inspector Clancey.
(on the boiler room openers who are also described as young travellers who want to find a place to stay on holiday)
“I foolishly trusted him. My generation is not very streetwise – because we never had to be.” – old woman taken for US$200,000.