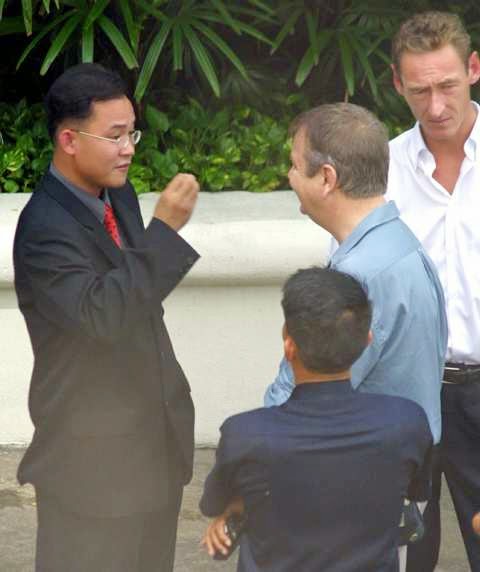 By Andrew Drummond for the Sunday Mirror July 29 2001

THE newspaper adverts promised a lucrative wage packet and a lifestyle to match in one of the world’s most exotic cities.
Yet hundreds of Britons lured to join Bangkok sales teams have found themselves caught up in a pounds 100 million shares scam. 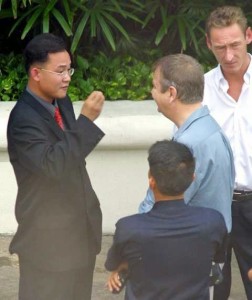 The ‘Boiler Room’ sting involves persuading unsuspecting investors to buy bogus shares in what police have branded a ‘near-perfect international crime’. Last week 36 Britons were among 86 people arrested by detectives in raids in Thailand. It was the culmination of a  two-year worldwide investigation.#

British, American and Australian conmen are understood to be behind the racket. The young sales recruits are considered expendable and companies involved regularly change their names to keep one step ahead of the authorities.
In Britain the scam starts with adverts – originating from a pounds 200,000 house in Blackpool – placed in free newspapers in London, Manchester and Scotland, offering sales staff untold wealth.

‘Do you have the determination and drive to become a millionaire?’ says one advert for Foreign Currency International seeking 75 staff.But within hours of arriving in Bangkok and shifts in the frenzied ‘boiler rooms’ – slang for share-dealing offices – traders discover that they have no stock to sell. 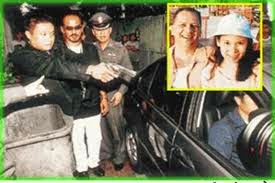 Police reconstruct the murder of Ian Travis, a manager at Foreign Currency International who was gunned down in Sukhumvit Soi 8, Bangkok. His boss James Mueller was extradited from the US on conspiracy to murder charges – but after the deportation the case was dropped.

Instead they are handed lists of companies and directors taken from business telephone directories and instructed to make ‘cold calls’.
Mechanical engineer James O’Connor, 38, flew out to Bangkok after attending an interview at the Piccadilly Hotel in Manchester.
He said:

‘I was interviewed by a guy from Blackpool called Tim Jones on Tuesday and was in Bangkok by Sunday. ‘We were met at the airport by a man called Jim and taken to the Amari Atrium hotel.
‘We were given pep talks by the company’s head of security followed by Tim Jones. They told us the Thai Prime Minister was part of the company as was the Chief of Police and a member of the Thai royal
household.

‘We were each divided into selling commodities and currency and went to work on the Monday at 5am. We had a script to follow making amazing offers – in our case on New York Harbour Petroleum – and were told to tell customers that with a minimum investment of 3,000 US dollars they could make 18,000 dollars within a month.
‘But it was all rubbish – I knew it was. The following day we would have to tell them how successful they had been, that their purchases had gone up several points and they should put in more. Soon customers who were told they were mega-rich already were being asked to put in 50,000 dollars at a time. One day a guy called Mark, from Manchester, closed a deal and was immediately given the prize of a champagne dinner for two plus a massage and jacuzzi with two girls. There was a big song and
dance about it. Ian and Tim were shouting

‘Mark just took the dinner. He had brought his 19-year-old girlfriend with him but other traders were getting drunk and laid nightly. Money was flying all over the place. If a deal was closed, out came a wad of dollars – 500 or 1,000 – and it was thrown down on the table in front ofthe trader and everybody had to clap.’

Traders were put up at the four-star Amari hotel, half a mile from the Oriflame Asoke Tower where they worked on the 14th floor.”

Mr O’Connor fled with former export manager George Higson, 47, from Nelson, Lancashire, who said: ‘I was disgusted and very scared.

“I have worked all over the world in genuine sales, but have seen nothing likethis. Everybody was ordered to scream and shout, giving the impression to callers that we were a highly-active fast-moving company. An American called Alex would come round shouting ‘Get them to the f***ing bank’ as though if another minute was lost the customer would lose out on a great investment.

“Back at the Amari the behaviour of my fellow Englishmen was disgusting. They were getting drunk and they all thought they were Nick Leeson (the British rogue trader who brought down Barings Bank). Some of
them were bringing girls back to their rooms.”

When the Sunday Mirror confronted Tim Jones he told us: ‘F*** off out of Thailand. You’re not welcome here.’

But he later apologised for swearing and said he did not know what was going on. Worst hit by the scam are investors in Australia.

‘We’re taking casualtiesat the rate of two to three a week. One man has lost 300,000 US dollars,’ said an Australian diplomat.The British Embassy in Bangkok has helped to rescue eight traders from Lancashire and Scotland who were brought out by FCI.

A British diplomat said: ‘We are looking into your allegations. We advise anybody who gets a call from a Briton in Thailand offering tempting share deals to replace the receiver.’