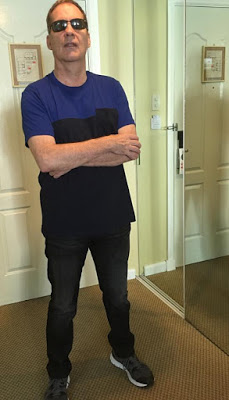 Now skulking in Wilmington, North Carolina, convicted extortionist Drew Walter Noyes, the infamous former publisher of the now defunct Pattaya Times newspaper has today through his lawyers has withdrawn a second case he brought against Kanokrat Nimsamoot Booth – as a result of not being able to return to Thailand.

This apparently despite telling a Pattaya police officer on Facebook ‘ See you soon’.

Noyes was accused of appropriating the Facebook page of Ms Warichaya Pharawet, known as Naam, to make libelous comments about Ms Nimsamoot, who had been assisting the author of this site

But, as is customary, both had to be jointly charged with libel.

Naam who had never met Ms Nimsamoot, could barely write English and knew nothing of the content she was accused of writing.

But Naam was found guilty and Noyes innocent such is the Pattaya court system.

Noyes today dropped his counter-charge and once again lawyers explained that he was away in the United States and unable to return to continue the case – let alone face the enactment or otherwise of a two year sentence for extortion, which he is supposed to do on Wednesday.

Having been used by Noyes Naam was ditched and is reported to have found a foreign boyfriend and is now no longer living in Pattaya.  She was given a one year suspended prison sentence thanks to her mentor and lover.

Noyes readers may recall got himself elected to be President of Lion Club 310D Silom, and Naam was the secretary! 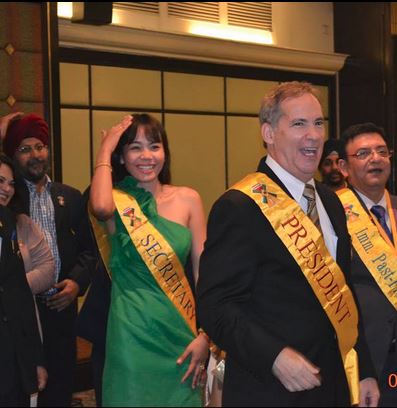 The second charge Drew Noyes withdrew followed his acquittal in a case brought by Andrew Drummond, Kanakrot, and Ally Cooper against Drew Noyes, Goudie and David Hanks, Noyes had been acquitted of libels in the Pattaya Times claiming he was not the owner..and the court accepted it (He had transferred ownership to an businessman in the U.S. (Let’s not go there).

Two further cases Noyes brought against the alleged publisher of the internet forum subzerosiam and Ally Cooper, an oil platform superintendent, have not been dropped but are expected to be thrown out, over the next month.

Subzerosiam was the initial publisher of the photo-shopped ‘gay parade’ pictures of Noyes and Brian Goudie, who has been sentenced to three years in prison for posing as a lawyer and former officer in the Royal Marines.

Cooper was merely accused of sharing a Facebook page from Andrew-Drummond.

The summons against him was sent to a hotel in Isaan at which he had never stayed.  But who is to explain the workings of the Pattaya court.

Goudie has been asked to appear as a witness for Noyes in the Subzerosiam case on November 27th.

At this point it is expected he will be confronted by his fan club with the television documentary ‘Brian Goldie – Serial Swindler’  together with Thai translation.

Goudie himself has to surrender to bail on December 14th to pay bail on a series of charges,

Halliday died of necrotizing fasciitis a flesh eating disease acquired in Nong Plalai Prison where he was serving a sentence for an attack in a Lucifer’s disco Pattaya.

Meanwhile Wanrapa Boonsu, Noyes’ common-law-wife and mother to three of his ten children – is continuing to operate Noyes’ extremely dodgy ‘One Stop Service Center’ also known on the web as ‘PattayaLawyers’ or ‘OneStopLegalCentre’ advising foreigners on what to do with their money and property.

She believes she will be acquitted on Wednesday being the lessor Thai accomplice.

But if truth be told it is unlikely Noyes could have carried out half his scams without her. 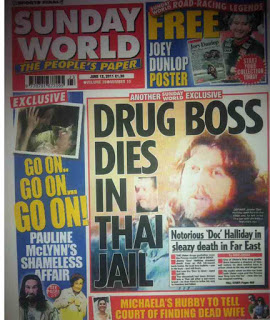 Apparently a new series of ‘unhappy’ clients are now seeking alternative legal advice in Pattaya but other lawyers are loathe to touch the cases because of the Noyes connection.

Meanwhile it would be interested to see if the Star in Wilmington, North Carolina catches up on its old friend Drew.

It was of course Scott Gold of the paper previously known as the Morning Star which published the first media investigation into the activities of Drew Noyes which can be read at this link beginning under the headline ‘Trouble Follows Developer’.