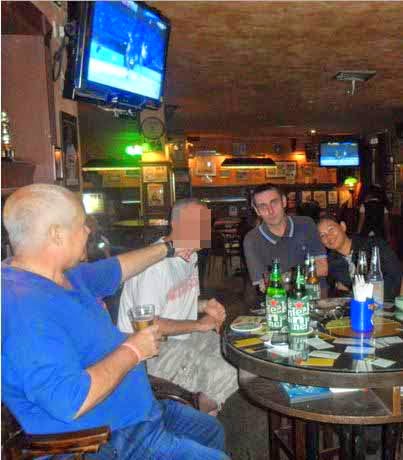 SO CALLED ‘TRUE-BRIT’ WAS MOTIVATED BY GREED

A former British bar owner in Chiang Mai is today named as one of the ‘bankers’ for a range of  ‘boiler rooms’ in Thailand known as the ‘Wolves of Bangkok’.


The former manager of the ‘Bears Den’ pub in Chiang Mai, was involved in the registration of companies to receive cash stolen from victims in Britain, Europe and Australia.

The Briton, now allegedly working for Canadian ‘Wolves’ in Chiang Mai, also made numerous trips to Manila from Bangkok to pick up cash and bring it back to Thailand without ever being checked at Immigration or Customs.

And it is that cash which it is alleged has been used to invest in property and Thailand’s lucrative tourist sex industry.

The allegations are made by a group of victims of boiler rooms who say they have lost over US$20 million between them.

In an internet post today they link the Briton, from Sutton Coldfield to American and British members of the ‘Bangkok Five’ – the top boiler room operators in Thailand.

The Briton received US$100,000 a month for his services to the boiler rooms and invested it in property in the Chiang Mai area.

The business was so lucrative that he gave up his day job organising such events as ‘Ladies Lunch Clubs’ in his bar.

Also named as bankers and money couriers are a Dutchman and an American.

The Chiang Mai Brit is also linked to British boiler room ‘staffer’ Bill Haines, a regular at Jameson’s pub in Pattaya, where he is known as the Foreign Secretary.  Haines was recently arrested in Pattaya for possession of cocaine.  He was later fined only 5000 Thai baht.  It is understood he co-operated with authorities including Britain’s National Crime Agency who may have obtained new lists of British victims.

An internet pub diary by British landlord Kim Fletcher in December 2012 reports: ‘Friday was going to be one of the maddest in Jameson’s History last week, and approached with great trepidation by both the Landlord and the Singing Party Animal Stuart Daly on knowing the arrival of (name redacted) and Bill Haines for a weekend can be terminal. Both, Stuart and Myself ducked out on the Thursday Night warm up. Which proved to be a very shrewd move as both Dave and Bill over did it on Thursday and only managed one Beer between them on Friday Night before having to retire hurt. Sadly instead of accepting Victory gracefully the Landlord and Party Animal with the taste of Victory in their system went out and celebrated for the next days and were a very sorry site to by the time Monday Morning came around. To quote the Party Animal. “I’ve felt Better!”.


Jameson’s has always been keen to keep close links with the British Embassy (Its Union Jack waving website repeats the Embassy’s sometimes dull press releases) and the BCCT. It is not suggested they know the secret occupations of their customers.

The latest allegations which include company details, and trips made by the Briton, a former bar manager in Hong Kong can be found here.