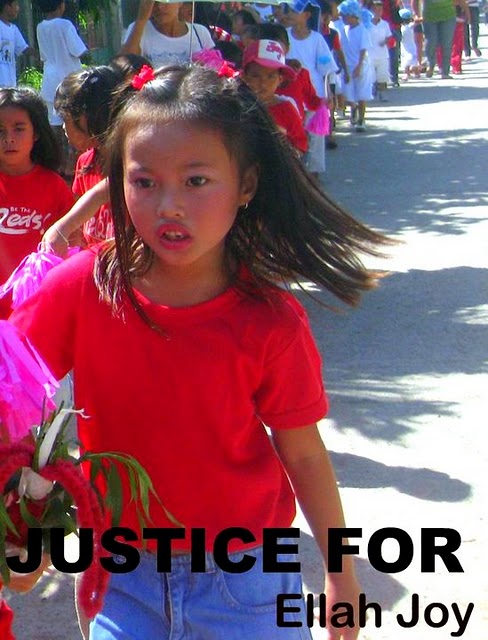 A British accountant and his Filipina girlfriend have been charged in their abscence with the kidnap and murder of a six-year-old girl on the Philippines island of Cebu.

Ian Charles Griffiths, 48, from South West London, is reported to have kidnapped the girl from outside a school in Cebu city, accompanied by his girlfriend 35-yr-old Bella Santos.

Warrants have issued for both Griffiths, who is believed to have fled to Hong Kong and Santos, who is currently in Makati, a district of Manila.

The girl’s body was found at the foot of a cliff on February 8th the same day the couple left Cebu on a flight to Hong Kong.  In Cebu people took to the streets to seek justice for the girl’s family.

The couple had since returned but Griffiths was reported to have left again after the police closed an investigation into a Norwegian man and his girlfriend for the same offence.

Police say they have now have witnesses to the couple outside the Calajoan Elementary school in Cebu luring Ellah Joy into a Pajero which was later found at Santos’ house, and also witnesses later to the couple dumping a package wrapped up in wire over the cliff at Barangay Guibuangan five miles away .

Police said they also found pornographic videos and sex toys at Santos house and found that she earned money from video sex chats.

‘It appears that Ellah Joy was abducted by for the purpose of exploiting the victim for the suspects’ cybersex business considering that child pornography is now in demand but went awry leading to her slaying and dumping of her lifeless body,’ said the complaint filed by a Task Force headed by Senior Supt. Louie Oppus.

Santos, a former bar girl on the Philippines island of Palawan has denied all charges and her lawyers have suggested police have fabricated evidence. They say Griffiths was ready to return, but could counter sue the police.
She told the Cebu Daily News: ‘I have been tossing and turning and have not been able sleep or eat. I do not know why I have been accused of this crime’.

She added that she was not ashamed of her work because it enabled her to eat delicious ‘fast food’, but hoped her past under the name ‘Chloe’ was not brought up against her.

More than 500 people attended Ellah Joy’s funeral at Pardo Cemetery, Cibu on February 21st.
‘I pity the child who died of others’ evil deeds,’ said the priest Monsignor Eliseo Gamallo. We pray that Ellah’s soul would awaken the persons who took the life of an innocent child’.