Well it’s been a little bit quiet here for a week mainly because I have been on a couple of assignments which I cannot write about until they hit the print media. But I have been keeping my eyes open, those ones that look at the internet…and well it’s been an interesting week in that respect anyway.

I was trawling one particular site and came across a thread about a Swedish woman who was raped on Phuket by a taxi driver…..then up pops a chap called ‘Buriramboy’   with the following inane comment:

‘I don’t buy this rape shite, think how difficult it is to have sex in the back of a car/tuk tuk as it is never mind with a woman trying to fight you off. Seems to me she had a few drinks, fancied a bit of fun and regretted it when sobered up, maybe Somchai just didn’t give her a cuddle aferwards’

Buriramboy an foul mouthed Brit from Essex uses a hip thrusting Star Wars stormtrooper as an avatar.  But also when he is riled uses one of a person he does not like, somwhat slavishly following his mentor “Dirty Dog’ aka Eric Broder, the host of teakdoor.com, who uses the picture of an internet geek who abused him. 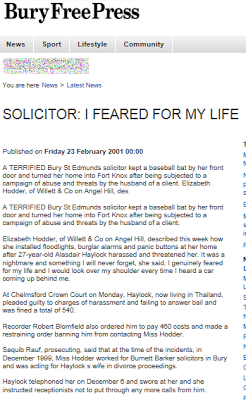 Anyway he actually got a bit of going over from the few sensible posters to the site in question including one called ‘The Gent’ who wrote:

‘Ahh,  the perspective from a chap who has a bit of previous himself when it comes to less than gentlemanly behaviour’.

‘The guy needs to believe that decent women out there truly like a bit of rough otherwise his wretched little ego couldn’t take the fact that he just hasn’t got what it takes’.

And  he ended with: ‘Frankly, Brrmm Brrmm Boy, you are simply too  f*cking stupid to be part of the human race’

Exactly. I was thinking just the same thing.  Buriram used to live in Thailand but he returned to the UK a few years ago and moved to Crewe and posters here keep me up to date with his latest antics.

Some other poster popped in remarking that Buriramboy was probably ‘hung like a pimple’.

Anyway Buriramboy does not take things lying down except when of course he is lying down.

‘That’s actually quite funny,’ he replied to  ‘The Gent’  ‘ never been described as a bit of rough before just like never had a problem with ‘decent’ women probably due to my private education and coming from good stock.”

Apparently he has had enough of Crewe not surprisingly and he has been asking people on the site in question if they know any houses in Bangkok around the 2 million baht mark as he is coming back.
Yippee!

At this point I have to say I laughed out loud. Buriramboy has already been on the same site in question saying that I fled in terror from him in a bar in Jomtien called ‘The Winchester’.

It’s all invention of course but I have been there and  this is certainly not a place for decent women or people of ‘good stock’. 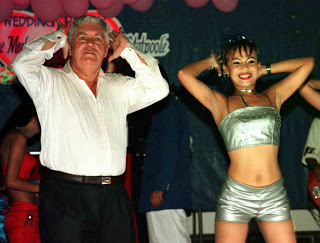 My interest in the ‘Winchester’ (now renamed something worse)  a meeting place for old lags from London and Essex, is because it is the place where  I found Michael Stacpoole Jeffrey Archer’s bagman who handed over lots of cash to prostitute Monica Coghlan at Victoria Station.
Stacpole at his Thai wedding – but that was not his bride 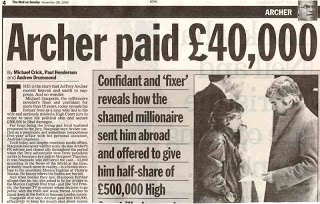 The Brits will understand this story. The former Lord Archer, is of course a novelist and former Deputy Chairman of Britain’s Conservative Party.

He had been given a pay off to hide out in Thailand and he chose Pattaya specifically where he started emulating his old boss.

Suddenly he became important again when the former peer was convicted of perjury.

Anyway, who is this private educated man Buriramboy who never has a problem getting a decent woman.

Well let me introduce Alasdair Haylock, now 37, whose last wife had to seek shelter in a battered wives refuge, due to his attitude towards women and of course her in particular.

Not only did Haylock seemingly beat up his wife but also went after the solicitor, who represented his wife and other battered wives in the same hostel.

Elizabeth Hodder , of Angel Hill, Bury St Edmunds, had to keep a baseball bat by her door and install floodlights, burglar alarms, etc for her own protection.

‘It was a nightmare.  I genuinely feared for my life,’ Ms Hodder told Chelmsford Crown Court in Essex.

Haylock had stalked her, sent insulting emails, plagued her with 50 phone calls a day, and left threats on her answer machine etc.

The court was told Haylock ‘now lived in Thailand’.

Elizabeth Hodder told the court that she hoped her experience would encourage victims of domestic violence to speak out.

Buriramboy was convicted of harrassment and skipping bail, but only got a fine. So no wonder he thinks its open season on women.

Meanwhile pending his return he has been informing us that he is watching the rubber prices daily, as he has 36 acres laid out to rubber in Buriram which he thinks his family are getting back.

Buriramboy admits to having worked in a Bangkok boiler room for a day.

He never hacked it. But I do not think he had any moral issues, as he says people who fall for boiler room scams are just stupid and greedy.