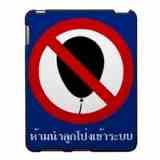 A foreigner travelling with his wife and six-year-old daughter was allegedly severely beaten with a truncheon by a security guard after trying to access the BTS sky train in Bangkok with a bunch of balloons.

The incident happened at Phomprong Station opposite the Emporium happened at around 7.15 pm last Friday and there were many witnesses, claimed a Thai commuter.

Balloons burst – the bloodied foreigner returns to try and get his train
The man was stopped at the entrance barriers with his daughter, wife*, and a male friend, and was told he would not be allowed to bring the balloons with him. They were forbidden.

Said witness Gee Gee, a young woman, who contacted www.andrew-drummond.com : ‘It looked like the foreigner was taking his daughter back from a party. The guard used very bad language.
“The foreigner said he had already travelled on the BTS to the Emporium with the balloons, but the guard took out his truncheon and hit him several times on the side of his head. The foreigner was trying to cover his head but his hands were full.
“I heard balloons pop during the attack.”

Gee Gee added: ‘I took a video of the last couple of minutes because I was so surprised at the behaviour of the guard.
” There were many witnesses there.  Nobody stepped in.  But I saw many people get their camera phones out.  The girl was still in unform and looked like she went to a private school in Sukhumvit.  His wife* was a foreigner too.
“My impression from the way he and his male friend dressed was that they were schoolteachers.
‘I have been back to the station since and have looked at where the CCTV cameras are they would have captured the attack for sure.’

Video: Gee Gee
If you witnessed this incident please contact me here leaving your email and telephone number. If you have a video get in touch. If you are the victim get in touch.  We are attempting to contact the BTS.


A foreigner Nickey Fynn performs tricks with balloons on the BTS – but he did bring them on deflated and in his rucksack
* A reader has posted that the woman, referred to here as the foreigner’s wife, was not his wife but a Thai woman who was supporting him. The poster adds that the foreigner was Irish and educated