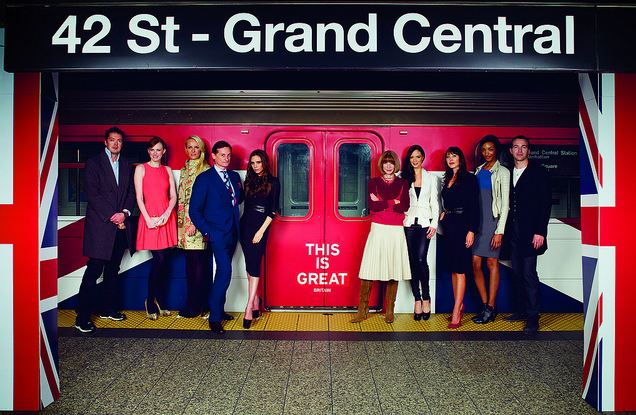 Britain is Great! A timely reminder

Today is good news day. This item is to remind readers that Britiain is Great and its especially great this year because we are holding the Olympics there.
(This in itself is an achievement. I have covered the Olypmic Games in LA and Seoul – showing my age I know – and neither is still exceptionally great except perhaps the Kings Head in Santa Monica)
Victoria Beckham, wife of some footballer, has been appointed to be the ‘Britain is Great’ Ambassador. On the New York subway a train has been painted in the livery of the ‘Britain is Great’ campaign.
This is not of course to advertise we have a better class of mugger but, as everyone in the Bronx knows who Victoria and that footballer are, it is now hoped they will be able to find where they came from in accompanying colour coded maps.

The first picture in the ‘Britain is Great’ campaign is a picture of the Glenfinnan Viaduct in Inverness-Shire, a stone’s throw from my old school ‘Hogwart’s in the Highlands’.  And in fact of course this is where you can see the Hogwart’s Express travelling the West Highland Railway in the Harry Potter films.

Truly wonderful scenery of course. But lest anybody forget down by the lochside Bonnie Prince Charlie raised his standard against the English in 1745 which culminated in the Battle of Culloden in which the Drummonds, Camerons, Macdonalds etc. were decimated and after  which ‘Butcher Cumberland’ set about putting the highlands to the sword, followed on by the Highland Clearances which is why there are now more clan chiefs in the US, Canada, Aus and New Zealand, and I am ekeing out a living in Bangkok rather than lording over my estate and shooting lodges.

So that’s why my nearest British neighbour calls his wife Gromit. You can’t argue with this. The Simpsons could though.

Not to mention its the easiest place in Europe to go bankrupt too. Our easy bankruptcy laws are the reason why floods of foreign companies have been opening up in the U.K. And good old Richard Branson still up there after battling decades of dirty tricks from Britain’s flag carrying airline.  True British phlegm! Dunkirk spirit even!

Well Britain is pretty good in the renewable energy department I guess. We have enough wind in the Great Glen, the Front Benches, or on the east coast to power the world I suspect. The blurb on this says the UK renewable energy market is worth I billion, well it will be by 2020, by which time we will have one of those windmills on top of the Houses of Parliament.

Aye, our heritage is that indeed. This is why we are showing a portrait of Henry VIII, Defender of the faith, the first Arsenal supporter and probably the most famous Royal shagger England ever had, who unlike ‘Airmiles Andy’ could simply have his wives executed if they did not deliver the goods. A Scot’s King later commissioned the design for the Union Jack.

Aye, that would be Scotland again, home of the inventors of, television, tar (macadam), the steam engine, penicillin, radar, the propellor, Arbroath smokies and Barr’s Ir’n Bru..
This male self-help machine,  modelled on the right hand of another famous Scot Naomi Campbell, was crafted in Livingston, between Edinburgh and Glasgow (and thus in the middle of nowwhere) Some 60 per cent of the male adult population of Livingston and nearby Falkirk have either been to ‘The Baccarat Bar’ in Bangkok, or ‘Boyz Boyz Boyz’ in Pattaya.

Well the blurb says the U.K. is home to four of the top ten universities in the world, but it only names two in the blurb because I guess the author, either forgot or just did not know. I presume you have to pick the other two from Edinburgh, Glasgow, St. Andrews and Aberdeen. The University of Wales is of course truly f**ed!

This is very true. And in every high street in Britain now has some of the best second hand shops in the world. I got some great bargains at Oxfam, Help the Aged etc, last time I was there. Most of the stuff I was buying however was still made in Asia. My M & S suit (not second hand. I had a real blow out here) was made in Cambodia.

And finally British sport.  I will have to defer to H.E. Asif Ahmad, the British Ambassador on this, as whenever Liverpool F.C. play I am bombarded with tweets expressing, anger, frustration and the occasional euphoria.  But that’s the penalty for stalking the Ambassador.
Britain has the best football teams money can buy, owned by a variety of foreign nationals, some of whom should be working the salt mines.
So there you have it Britain IS great. And its comfortably re-assuring that with this new brash advertising campaign, Britain will be always – almost up there, but not quite. And we Brits will always remain re-assuringly a little bit eccentric.
But how sad. Not one picture from Northern Ireland which is a bit of a blow because they invented, I have read, Irish Road Bowling, and the portable defibrillator.