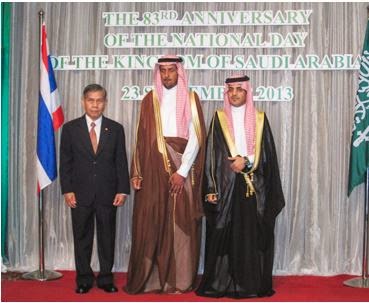 You really cannot make up what happens in Thailand but the latest case in the criminal courts seems so obscene that it almost defies belief.


This all started many years ago when a Thai thief working in the Royal Palace in Saudi Arabia stole the crown jewels and had them packaged back to Thailand.

On hearing of this Thai Police jumped and nabbed the jewels for themselves, and arrested the thief on the way who got a nominal term of imprisonment. In order to cover up their deed various people had to be killed.

Eventually General Chalor Kerdthes took the rap and was sent down. Some jewels were recovered, but not the famous Blue Diamond, and along the way police even tried to substitute real gems with paste ones.

In 1990, three Saudi diplomats were gunned down in Bangkok. Then, al-Rawaili, a private businessman reportedly investigating the jewellery thefts and the Thai labour racket, disappeared.

But there was witness to al-Rawaili’s disappearance. He was Pol Lt Col Suvichai Kaewpluek, who testified in writing that he was “present” when the businessman was abducted to a hotel in Bangkok’s Khlong Tan area.

It seems that the Saudi’s were quite happy with the way things were going with this case and that the judge had given Kaewpluek’s statements serious consideration.  The Thai policeman declined to give evidence in person as there was of course a serious risk to his life – and Thai police were certainly not going to protect him.

Then the judge was switched. The new one ruled that as Kaewpluck had not turned up in court his evidence had no weight and acquitted the defendants.

Abdalelah Mohammed A Alsheaiby, the Saudi Charge D’Affairs was in court to hear the verdict as were relatives of the missing businessman.  To say they were disappointed would be an understatement.

Thailand should expect some reaction from Saudi Arabia which has already reduced its mission so it no longer has an Embassy in Bangkok.

One has to remember that four, not just three Saudi diplomats were killed in Bangkok about the same time.  Was this perhaps overkill?

Did the Thai police think these diplomats knew too much too?

It appears now that al-Rawaili had nothing to do with the gems.

People learning about this case might get the wrong impression that police were actually running the
crime in Thailand.