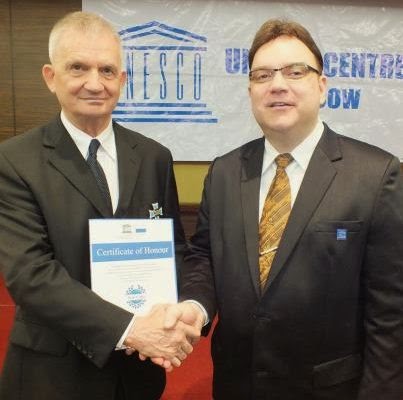 -HONOUR TO WHOM HONOUR IS DUE!
BUT NOT IN PATTAYA SURELY!

This is a sad day for Niels Colov, CEO of the Pattaya People Media Company, who, when the last time I communicated, was still, he said, convinced he had been awarded the UNESCO Cross and would not believe otherwise until UNESCO told him so.


Never mind that UNESCO issued a press statement deploring the investiture in the Richmond Hotel in Bangkok and complaining of breach of copyright of the UNESCO logo.

Colov, former Copenhagen pimp, and Group Leader of the Pattaya Police volunteers was having nothing of it.  Only if UNESCO contacted him in person would he be deprived of his cherished cross. (UNESCO does not give out crosses for the simple reason that it is a Christian religious symbol).

Now I have to tell him that Dr.Mathias Kunze who claimed to be from UNESCO Krakow – the man who invited Niels along, and apparently invited Niels to invite others to get the medal too – has gone bust.

Well he may personally have not gone bust, but another scam he was running has – and he has had to wind up the Benjamin Franklin College in Alpnach, Oberwald, Switzerland.  The college claimed to be a University and offered degrees to punters at the Universidad Empresarial de Costa Rica for 16,000 Euros.

This university was exposed in Der Speigel as nothing more than a fake degree mill.

But look above. See also who claimed to have a Honorary Degree from the same University. None other than Niels Martens Storm Colov – the same man who had a history in Denmark of pimping, vandalism, etc in this link.

Now I am beginning to think Niels was fibbing when he said this:”I can think of many reasons why UNESCO should give me an award.”

He allegedly received the UNESCO Cross for, ehem, ‘outstanding public, scientific and cultural engagement in human life and education’.

As for UNESCO, did this organisation ever tell Niels that his medal was totally fake? No it promised to take action. The response was to contact the Thai UNESCO authority to take action.

The Thai office did nothing. It is much more efficient when they are dealing with incoming cash I’m told.

Still Neils Colov and his friend, former Pattaya Times publisher, #DrewNoyes can still hang on to the knighthoods, which they got from the Knights of Rizal.

Whoops, sorry I am wrong there too. It seems this lot have closed down in Pattaya now.

Still Drew has the Lions Club 310D of Bangkok Silom.


While Kunze has bitten the dust on the above, he is back up on the internet again offering professorships and honorary degrees from Hamburg.